Q&A: Reality Fell Upon Us: Women's Voices Must Be Heard

KIGALI , Jul 29 2009 (IPS) - Fifty-six percent of Rwanda's parliamentarians are women, a manifestation of the active role women have taken in rebuilding the country since the 1994 genocide. 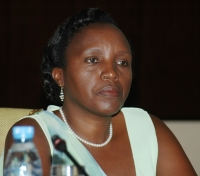 Influencing the population: Nyiramilimo says Rwanda's women now have confidence in themselves that they can be politicians, entrepreneurs, and scientists. Credit: John Banda/IPS

Odette Nyiramilimo, who was Rwanda's minister of state for social affairs from 2000 to 2003 and a senator from 2003 to 2008, attributes the strong presence of Rwandan women in government to an enabling environment for affirmative action in Rwanda.

She believes the Fourth World Conference on Women in Beijing in 1995 was a key influence for Rwandan women; as is the firm commitment from President Paul Kagame that women's rights are human rights and that development is not possible whilst leaving behind 52 percent of the population.

IPS: Many countries have statements, laws, and quotas designed to increase participation of women in government, but still fail when it comes to implementation. What has motivated and sustained Rwanda's efforts to achieve gender parity in the legislature? Odette Nyiramilimo: I can say the thirst for development. If more than half the population remains behind, you can be sure of failure.

Another reason is that in the aftermath of the genocide, women played a great role in rebuilding the country. Women worked hard, took care of the orphans, brought communities together, so everybody could see women were key players. After that, the reality fell upon us that women's voices need to be heard.

IPS: What are some of the major challenges you've faced along the way and how did you overcome them? ON: To have women participate fully in political positions, the biggest challenge was women themselves. They were not trained to be politicians; they were not even trained to be leaders in any sphere, which was very clear during the electoral periods. You wouldn't see a single woman vying for any position. But today women have realised that they too have to be part of the development process.

The other challenge is men. They did not understand how a woman could be a leader. They thought women are better at home taking care of families or doing some social work as nurses, institutors… but today they do understand, because they have seen what women can do. They have experienced the leadership of women.

The other challenge is cultural barriers, where women feel that they have to let men lead. A woman being the heart of the family has limited time to spend in an office, to look for information by reading newspapers or listening to news. They have other responsibilities of taking care of the children and the husband.

But now there is some change of heart in men, who now understand that they too need to be proactive in taking care of their families as compared to a few years back.

I would say the challenge that women face today is balancing careers and family, being leaders – especially as women – needs to start at home. We cannot abscond from our duties as mothers and wives, and therefore need to learn the delicate art of balancing. Failing at home will more often than not be interpreted as weak or incapable leadership.

It is time men stop seeing women as competitors but as partners. We still experience hostilities as women from some of our male colleagues. Some of them started feeling threatened by the large number of women in parliament and started advocating for a change in the law, saying that women should not receive special treatment in the next elections.

But we are fighting for the same cause: and that is development for our country. That is what they should understand.

These were the major challenges. We recognise that we are still not yet there and there's a lot more to be done to achieve equality for all. Our aim is to have 30 percent of women in every sector, commerce, education, health, and so on.

IPS: How did you manage to achieve this? How were you able to encourage women and convince men that women too can lead? ON: First by drawing up laws that gave women more rights. In 1999, we passed a law on inheritance and for the first time women could inherit land from their families. After that several other laws were passed that made sure women too had a say.

In 2003, the new constitution allocated 30 percent to women at any decision making position, which ended up having 48 percent of seats in parliament held by women, an effort that encouraged women to participate in politics, from local governments to highest level.

Women's associations like Unity Club, Rwanda Women Leaders Caucus, Rwanda Women Parliamentary Forum, also played a big role at sensitising women to take part. Their members, as women in leadership, also held educational conferences for women and girls. We went to schools, talked to associations, to public gatherings, to opinion leaders, and so on… It is still an ongoing process.

A good example is an initiative by the first lady called the Imbuto Foundation, which awards girls topping their classes in primary and secondary education. Women in leadership positions are invited by this organisation to encourage the girls not only to perform in class but also outside class and it has had tremendous results in changing the mindset.

IPS: You and other women have been in a position of power for a significant time now. What changes have you brought to parliament and government and how have these changes translated into general improvement for the Rwandan women? ON: First and foremost is the change in the mindset that says women should always play second fiddle. Rwandese culture – and African culture – generally spells out a woman’s position as second to the man.

That has now changed. Women now have confidence in themselves that they can be politicians, entrepreneurs, and scientists. A significant number of them are doing quite a job influencing the rest of the population.

Today it is easier for women to access bank loans – that was unheard of a few years back. In my own personal experience I couldn't get a bank loan simply because I was a woman!

The number of girls and women in higher institutions of learning has increased; especially the number of those doing Sciences and Technology has shot up significantly as compared to yesteryears.

IPS: At what levels would you say women have been able to influence government the most? ON: I would say at the national level, because that is the level that has potential for most tangible results. A good example being passing of crucial laws: inheritance law, law against gender based violence, gender mainstreaming in budget, to mention a few.

Women in leadership believe that a continued advocacy for gender equality is needed at all levels, particularly at the grassroots, and educating our male peers on the importance of involving equally women for the greater growth of our nation.