SIRTE, Libya, Jul 3 2009 (IPS) - The final day of the African Union summit has been dedicated to the issue of the arrest warrant issued by the International Criminal Court against Sudanese president Omar al-Bashir, charged with seven counts of war crimes and crimes against humanity, including murder, rape and torture. 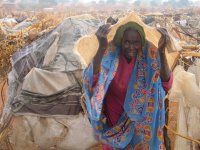 A Darfuri refugee shelters from rain: 'AU member states shall not co-operate... relating to immunities for the arrest and surrender of Sudanese President Omar al-Bashir to the ICC.' Credit: Claire McEvoy/IRIN

The thirty or so African states that are signatories to the ICC are obligated to arrest Bashir, should he set foot on their soil, and turn him over to the court. Nonetheless, the continental body has taken a decision not to cooperate with the international court.

"What we see here is very heavy-handed attempt by Libya to force states who are members of ICC to abandon their legal obligation and to give a free pass to Omar Al-Bashir to traipse around the continent without worry," Reed Brody, spokesperson for New York-Based Human Rights Watch told IPS. HRW has taken an active role in urging that the indictment of Bashir is upheld.

"But the fact is that States have legal obligation, they cannot erase by a political resolution here. The proposal for the rest of the states not to arrest Al Bashir is a slap on the face of people of Darfur."

One argument made by those who want to see the Bashir indictment suspended or dropped is that the court has unfairly targeted Africans, and would never bring similar charges against officials from the United States or Israel.

Responding to the efforts to thwart the ICC in an opinion piece in the New York Times, former U.N. secretary-general Kofi Annan wrote: "One must begin by asking why African leaders shouldn’t celebrate this focus on African victims. Do these leaders really want to side with the alleged perpetrators of mass atrocities rather than their victims?

"Is the court’s failure to date to answer the calls of victims outside of Africa really a reason to leave the calls of African victims unheeded?"

Namibia ratified its membership of the ICC in 2002; Namibian ambassador to Zimbabwe, Ndali-Che Kamati, who was in Sirte for the summit explains his government's view.

"The position of my government is that we do not condone impunity, but when it comes to the position of Sudan, and the indictment of President Bashir, we think it is not the right moment. Because we have serious issues to deal with in Darfur and Southern Sudan, and we think that this indictment does not give us any space for manoeuvre to persuade and work together with Sudan government to have these issues resolved."

Annan urged African leaders to remain firm. "The ICC represents hope for victims of atrocities and sends a message that no one is above the law. That hope and message will be undermined if the African Union condemns the court because it has charged an African head of state.

"The African Union should not abandon its promise to fight impunity. Unless indicted war criminals are held to account, regardless of their rank, others tempted to emulate them will not be deterred, and African people will suffer."

As the summit drew to a close however, a statement was released announcing that "The AU member states shall not co-operate… relating to immunities for the arrest and surrender of Sudanese President Omar al-Bashir to the ICC."

Bashir is effectively free to travel the length and breadth of the continent.