Kafue District, ZAMBIA, Jul 16 2009 (IPS) - Not even the least alert of drivers can miss the sign along the busy road 30 kilometres south of Lusaka: “Look, Conservation Farming Pays!” 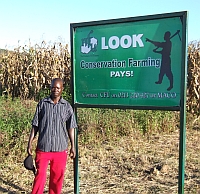 Touted as a solution to food insecurity and an adaptation mechanism to climate change in Africa, conservation agriculture (CA) is giving farmers like Sinoya Phiri, from Zambia, a reason to smile in their fields and all the way to the bank.

Phiri, who has a small holding in Kafue district, a major maize growing area in Zambia, says curious motorists have stopped to ask about the farming technique when they see his tall maize crop, a stone’s throw from the sign.

“I tell them that this is a way of farming that has changed my life,” said Phiri, pointing to two hectares from which he expects two hundred 50 kilo bags of maize per hectare this year, doubling last year’s harvest. All thanks to conservation agriculture.

For Phiri, the practice has secured him good income from better yields. Apart from supporting a family of 10, including his mother, aunt, brothers and sisters, he has even installed a satellite dish and bought a generator.

Conservation agriculture is a resource-efficient crop production practice based on three principles that enhance biological processes above and below the ground. The guiding principles involve minimum or even zero mechanical disturbance of the soil disturbance; keeping the soil covered at all times, either by a growing crop or a dead mulch of crop residues); and diversified crop rotation.

The emphasis is on simple, low cost tools such as ox-drawn planters and rippers. A Brazilian invention, the Fitarelli no-till planter is increasingly becoming a popular CA tool. It costs $500 and has been used to plant a variety of crops.

CA is credited with eliminating power-intensive soil tillage and reducing labour required for crop production by more than 50 percent for small scale farmer. According to the FAO, this is especially important for households affected by HIV and AIDS where children or the elderly are responsible for farm labour.

For mechanised farms, it reduces fuel requirements by 70 percent and the need for machinery by 50 percent.


A few metres from his house, 50 pigs root contentedly in a row of pig sties. Phiri breeds pigs which he sells to supplement income; the manure is used in the fields.

Conservation agriculture was introduced in Zambia over ten years ago. The government says at least 180,000 small holder farmers are using its principles, which focus on minimising soil disturbance, maintaining a permanent soil cover and promoting crop rotation. In addition, farmers use low cost tools and traditional crop varieties without herbicides or herbicide-tolerant varieties.

Phiri, a father of four, has figures to prove the benefits of conservation agriculture. While it would cost him one million kwacha – roughly equal to 181 dollars – to hire a tractor for two hours of tillage, he spent $45 on labour to prepare his field this year.

Some challenges still remain in adapting CA for Africa, Thiefelder admits. These include weed control, lack of animal draft power, affordability of appropriate machinery and tools and the need to changing mindsets.

The plough has become the symbol of agriculture and many, including farmers, extension agents, researchers, university professors and politicians have difficulty in accepting that agriculture is possible without tillage.

Proponents of CA say that the practice lowers crop vulnerability to drought by reducing water requirements by up to 30 percent. This makes better use of soil water and facilitates deeper rooting of crops. In extreme wet conditions, CA facilitates rain water infiltration, reducing soil erosion and downstream flooding.

Collins Mwinga, a farmer from the Mwachisompola area about 70 km from Lusaka, has used a ripper – a tool which causes minimum disturbance to the soil – since learning about conservation agriculture.

“Using the ripper, I was able to plant earlier and noticed a difference in the yields between the time I used the plough and the time I have used the ripper,” Mwinga said.

It is estimated that 100 million hectares of land are under conservation agriculture (CA) globally. In Africa, the total area under CA is still very small relative to areas farmed using conventional tillage methods, constituting less than four percent of the total area under cultivation.

In Southern Africa, few countries have adopted CA as part of their agricultural programming policy and strategy despite the potential benefits. The Food and Agriculture Organisation (FAO) cites limited awareness of the technique and its potential benefits, limited sharing of documented evidence on CA and limited or lack of supportive policies, research and extension and resource capacity as some of the causes of poor uptake of CA in southern Africa.

Permanent secretary in Zambia's ministry of agriculture and cooperatives, Bernard Namachila, told participants in an agriculture tour that 325,000 hectares of land in Zambia were currently under conservation agriculture. Two hundred forty thousand families are being targeted to adopt this type of farming by 2011 as a means of boosting food security in the country.

Yet the rate of adoption of conservation agriculture is low in Southern Africa, despite evidence from organisations such as the International Maize and Wheat Research Centre (known by its Spanish acronym, CIMMYT) showing that the practice has many benefits over conventional farming.

According to the FAO, up to 80 percent of the people in Southern Africa depend primarily on agriculture for their livelihoods and survival., making them vulnerable to natural and socioeconomic shocks. The vulnerability comes from low crop and soil productivity, extreme weather, climate change, high food prices and the high cost of agricultural inputs and food commodities.

Already compromised by loss of income and poor productivity due to high rates of HIV and AIDS, poor households, who form the majority of populations in Southern Africa, are increasingly unable to cope with these pressures, leading to worsening food insecurity.


“This year I expect to get 97 bags (4,850 kg) per hectare. With some of the proceeds from my maize, I am building a new house and bought two cattle. I even helped pay lobola for two of my children and I am paying school fees for my nine children.”

Despite its lauded benefits, there are those who are not convinced. Ken Giller, a professor at the department of plant sciences at Wageningen University in the Netherlands, published a critical article titled “Conservation Agriculture and Smallholder Farming in Africa: The Heretics’ View”. Along with three colleagues, he argues that conservation agriculture is being promoted so strongly by international research and development organisations that critical debate is stifled.

“Claims for the potential of CA in Africa are based on widespread adoption in the Americas, where the effects of tillage were replaced by heavy dependence on herbicides and fertilizers,” writes Giller.

Giller and his colleagues say it cannot be automatically assumed that CA will bring benefits to the farming system and rural livelihood as a whole simply because benefits are shown at the plot level. A farming system consists of many interacting components, they point out, and is subject to a range of bio-physical, socio-economic and cultural constraints.

The researchers argue that there is no clear and consistent empirical evidence to back claims that CA increases yields or reduces labour requirements and costs of production. Their findings point to the opposite: decreased yields, increased labour requirements when herbicides are not used – this added labour is typically shifted to women – and a shortage of mulch due to poor productivity and prioritising the feeding of livestock with crop residues.

“We conclude that there is an urgent need for critical assessment under which ecological and socio-economic conditions CA is best suited for smallholder farming in sub-Saharan Africa. Critical constraints to adoption appear to be competing uses for crop residues, increased labour demand for weeding, and lack of access to, and use of external inputs.”

Giller argues that CA is but one of option amongst others for addressing the critical problem of raising agricultural productivity in sub-Saharan Africa.

CA has its sceptics despite its lauded benefits, says Collen Nkatiko, the manager (field operations) at the Conservation Farming Union (CFU) a technical unit of the Zambia National Farmers Union (ZNFU) established in 1995.

“The most important policy is that CA must be pursued in perpetuity. It took 15 years in Brazil before it took off, it can be done in Africa,” says Aagaard.

* This story is part of a series of features on sustainable development by IPS and IFEJ –International Federation of Environmental Journalists­ for Communicators for Sustainable Development (www.complusalliance.org)