FORTALEZA, Brazil, Aug 9 2009 (IPS) - Zilá Ferreira and Juraci Lisboa were in the grip of depression since 1996 – the former over the death of her mother, and the latter because she was “abandoned with seven children under 14.” 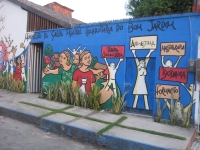 Both of these Brazilian women, who were 36 years old at the time, began staying in bed for days on end, unable to muster the motivation to get up.

“Life wasn’t worth it anymore; all I did was cry, and I was afraid of everything,” says Ferreira. Nevertheless, she refused to take psychiatric medication, protesting that “I’m not crazy.”

“I didn’t think I would be able to raise my kids; I had never worked outside the home,” says Lisboa.

Help came from “Father Rino”, who had just launched the Community Mental Health Movement in Bom Jardim, one of the poorest, most violent neighbourhoods in Fortaleza, the capital of the northeastern Brazilian state of Ceará, where Ferreira and Lisboa have lived since their families left the countryside three or four decades ago.

“Father Rino gave me such a warm hug” and “life once again had meaning,” says Ferreira, describing how she found support in the Movement, where she received training as a massage therapist and has worked since 1998.

In the case of Lisboa, she is so happy today in her job as a cook that she would prefer not to have days off or vacation. Overcoming depression, she says, was a lengthy process, with “ins and outs, like the tide,” until she finally came to realise that “I wasn’t left by my husband; I was liberated.

“I put up with his alcoholism and his humiliation of me for years, because I thought that was my duty as a wife,” she says.

Today she regrets that her father did not allow her to go to school beyond fourth grade.

Ferreira had even worse luck in that sense. “I was illiterate, I had no opportunity to study as a girl.” When she decided to take adult literacy classes, her husband literally locked her in the house. He would not even let her talk to the neighbours, she says.

Alcoholism is a major problem in Bom Jardim, affecting a full 45 percent of families, followed by depression, which affects 4.5 percent of families, according to Father Rino – Ottorino Bonvini – a Comboni priest and psychiatrist from Italy who chose Fortaleza for his community mental health mission.

In 1993, when he learned in a congress of psychiatrists about a “community therapy” method developed by his Brazilian colleague Adalberto Barreto, a professor at the Federal University of Ceará, he felt he had found what he was looking for: a way to promote mental health in society as a whole, including the poor.

He was drawn to Latin America because of Liberation Theology, a progressive current in the Catholic Church that declares a “preferential option for the poor” and fights for social justice.

And he chose Bom Jardim, a neighbourhood of around 200,000 people on the outskirts of Fortaleza, because the Comboni Missionaries are active here.

In 1996, he began to train dozens of community therapists and launched the Community Mental Health Movement, which now operates in 10 centres around the neighbourhood and surrounding areas.

“Community therapy is only the gateway” to the Movement, Father Rino told IPS. It is practiced among groups of people sitting in a circle, who try to help each other. Some talk about their problems, and they all discuss cases chosen as examples, sharing their experiences and solutions.

In many cases, the group therapy and the bonds of solidarity and support built up at the weekly meetings are sufficient to enable the participants to overcome their problems.

The idea is to drawn on the community’s own resources, culture, and accumulated knowledge and experience to collectively strengthen mental health, says Barreto, the psychiatrist and anthropologist who created the Movement for the Integration of Community Mental Health in 1986, which trains community leaders in Brazil’s shantytowns.

Barreto’s programme got underway in Pirambú, a “favela” or shantytown of Fortaleza that is home to more than 250,000 people.

The effectiveness of the innovative community therapy method has been widely recognised, and it has been incorporated in the public health system in many Brazilian cities and replicated in other countries.

Besides promoting mental health in poor communities without access to individual therapy options, the technique acts as a “filter” for identifying and referring patients to the specific appropriate treatment, in the few cases that it is necessary. This shortens the lines in public hospitals, which are thus better able to provide personalised care to those who really need it.

The Movement now forms part of a policy established by law in 2001, aimed at avoiding the hospitalisation of mental health patients, and encouraging their return to the home and the community, as well as social participation in prevention of mental health problems and assistance for sufferers.

Psychosocial Care Centres, created by that policy, are mushrooming around the country. They now number around 1,600 nationwide, and in Fortaleza they have grown from three in 2005 to 14 today.

The Bom Jardim Psychosocial Care Centre, which opened in 2005, is run by the Movement under an agreement with the city government, and has “important synergy” with the Movement, according to Father Rino.

The Movement offers its experience in community therapy and other mental health activities, as well as in efforts to fight poverty, while the agreement with the city government represents half of the budget, said the Centre’s financial administrator, Reni Dino. Other sources of funding are social and cultural projects run by the state and national governments, donations, and sales of the project’s own products.

The expenses of the Centre, which has 43 employees, range between 30,000 and 40,000 dollars a month – a small budget explained by the low salaries paid and by the fact that around 120 volunteers work there, says Dino.

The impact of the Movement can be gauged by the reduction in the number of psychiatric visits to the Centre, which have dropped from 3,500 to 1,300 a month, reflecting major savings for the public health system, Dino underscores.

The methods used – “biodanza” (combining music, movement, emotion and expression), the arts, family support, promotion of self-esteem and a “green” pharmacy based on plants with medicinal properties – make the therapy more collective and innovative and reduce reliance on drug-centred treatment.

Aloisio Caminha, 33, used to require psychiatric care. Since he was a boy, he has suffered from obsessive-compulsive disorder and has been plagued by “persistent unwanted thoughts,” expressed as blasphemy and swearwords that conflict with his strong religious beliefs. When his problems got worse during his years of adolescence, he had to drop out of high school.

The improvement he has experienced since receiving help from Father Rino and participating in the Movement’s activities, like self-esteem groups and computer courses, explain why he has made the 1.5-hour journey to Bom Jardim, involving three bus transfers, from his home for the last three years.

To “pay back” these benefits, Caminha volunteers in several of the Movement’s projects, and hopes to overcome his problems in order to study philosophy and ultimately become a Franciscan priest.

In the Centre, all of the employees do a little of everything. Financial administrator Dino, for example, is also a “biodanza facilitator.”

And Marcio Firmiano, 29, is not only a fundraiser but an actor in the arts and music programme, which offers local residents courses in music, visual arts, craftsmaking and theatre.

The programme formed the group Semearte, which uses street theatre techniques. Half of the income earned from the shows is funneled back into the Movement.

It was through this programme that Firmiano discovered his vocation as a clown, with a character named “Fuxico” (gossip) who never fails to leave the audience in stitches.

But above all, the Movement is marked by a “sense of equality” in the way everyone treats each other, say Ferreira and Lisboa, who see Father Rino not as a saint or a boss, but just as “a friend.”