ATLANTA, Georgia, Aug 30 2009 (IPS) - As U.S. cities consider the urgent need for sustainable public transportation options, advocates are looking for ways to achieve the environmental benefits of such projects without displacing residents through gentrification of surrounding areas. 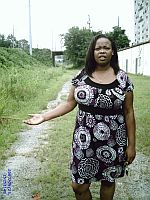 Dwanda Farmer stands at a Beltline site, asks why public dollars are being spent to subsidise developers. Credit: Matthew Cardinale/IPS

The U.S. transport sector accounts for about a third of the country’s energy-related carbon dioxide emissions, which contribute to global warming, according to the Energy Information Administration. Since 1990, transportation sector CO2 emissions have risen by 21.1 percent.

While numerous U.S. cities have excelled in developing public transportation projects that reduce traffic and pollution, others have set examples for how to increase affordable housing. However, few – with Boston’s Indigo Line and Green Line Extension being exceptions – have sought to achieve both together.

In Atlanta, a new project called the Beltline is presenting a unique opportunity to create a train system that will link Atlanta neighbourhoods together in a circle, to intersect with the existing north-south and east-west lines, while providing new affordable housing.

The Beltline has brought together environmental advocates like the Sierra Club and Trees Atlanta, which are also excited about new parks and green spaces being promised; public transportation advocates like Citizens for Progressive Transit and PEDS (Pedestrians Educating Drivers on Safety); and even labour unions – they want those construction jobs.

However, groups like Georgia Stand Up have been fighting to make sure the Beltline includes as much affordable housing as possible and that the Beltline does not displace working class families and seniors who own or rent near where the Beltline is planned to be built. They worry the city is not doing enough to mitigate the displacement expected to occur as property values rise.

“If there’s not going to be [sufficient] affordable housing in it, what’s there to get so excited about? Why put in the public investment? You was the devil in this town if you didn’t support the Beltline when they were trying to get that (bond programme) passed,” Farmer told IPS.

The city will have to acquire the land along the pathway of the Beltline before it will be able to lay train tracks and it is still unclear whether the current owners of that land are willing to sell it, or for how much.

The city is taking out bonds in order to acquire the land, and 15 percent of each bond is going into a Beltline Affordable Housing Trust Fund (BAHTF), expected to generate 240 million dollars over a 25-year period.

One of the key issues has been how to spend the trust fund.

The City of Atlanta, Fulton County (which includes part of Atlanta), and Atlanta Public Schools have agreed to forgo any new tax revenues, above and beyond what they are currently getting, for the next 25 years, in order to pay back the bonds.

The assumption is that the initial investment will yield rewards in the long run because the new development will result in increased property taxes, to continue long after the bonds are paid off.

“When we first started this work, one of the biggest fears we were hearing, particularly from neighbourhoods in southwest Atlanta [where poor, Black residents are concentrated], were fears of displacement because of the gentrification related to the project,” said Melissa Conrad, associate director of Georgia Stand Up.

Georgia Stand Up worked with Prof. Dan Immergluck at Georgia Tech University to study the impact of media publicity around the Beltline on increasing property values, even though no tracks have yet been laid.

“In some areas, he found property taxes had gone up 174 percent, especially in southwest Atlanta. The Beltline is obviously going to create a situation where involuntary displacement of homeowners is going to take place,” Conrad said.

Atlanta, Fulton, and APS each appointed members to a Beltline Affordable Housing Advisory Board (BAHAB), tasked with recommending how to spend the trust fund.

Even that was considered a compromise, seeing as how Atlanta lacks tens of thousands of affordable housing units.

“We’d like to see up to 40 percent (affordable units). If we didn’t have homeless people it would be different,” said Anita Beaty, executive director of the Metro Atlanta Task Force for the Homeless.

Yet, when BAHAB issued their recommendations, they went to the Atlanta Development Authority and Beltline, Inc., for so-called technical refinement. The ADA and the Beltline raised objections that developers would not be able to cover their operating costs and service their mortgages if – as BAHAB was proposing – 10 percent of the units were set aside for the least advantaged.

“We actually did an analysis. In order to encourage developers to target that income, we would have to basically give a lot of development dollars. They would have to take a big hit on the rent. You’re giving them… a grant, but they’ve gone out and borrowed a lot of money for the project [which leads to debt servicing costs],” said Dawn Luke, a housing project director for the ADA.

“When we showed them the analysis, how much subsidy would have to be given to developers to make the project financially feasible, then they understood. That’s why BAHAB agreed to it,” she told IPS.

When the City Council approved BAHAB’s final recommendations, the 10 percent set aside for extremely low-income households had been changed from a requirement to a strong preference. Advocates were displeased.

“We don’t know what’s financially feasible until we take it out for a ride and test it out,” Conrad countered. “This is an opportunity to raise the standards the City of Atlanta has set around community development… to make sure it is equitable and distributed fairly.

“This was a missed opportunity in our opinion to create some affordable housing requirements that touched where the greatest needs are in our city,” Conrad said.

The initial BAHAB recommendations also included numerous policies that would mitigate displacement due to gentrification.

These included community land trusts, property tax forgiveness for seniors and long-time residents who cannot afford the higher taxes, protection for renters, and an inclusionary zoning policy, which would require new city developments – not just those on the Beltline – to have a certain portion of affordable units.

These policies also were excluded from the final proposal approved by City Council.

“The Trust Fund in and of itself is a displacement mitigation technique, in terms of affordable units we’re going to be creating,” James Alexander, senior project manager for Beltline, Inc., replied. “The idea is to make sure that people have an opportunity to live around the Beltline whether in their current home or in another home that might make sense for them.”

However, “there’s no way the Trust Fund’s going to create what would be a one to one replacement for who’s going be displaced. It’s not realistic,” Conrad countered.

To be sure, it was not the mission of BAHAB to propose anti-displacement policies, many of which would require city or even state approval. But advocates say that to move forward on a project that will likely displace people without any of those measures is irresponsible.

“The fact of the matter is there’s a role… any implementing organisation can play in jump-starting policy solutions for… (problems for which) they are responsible,” Conrad said.