ENVIRONMENT-SOUTH AMERICA: Mapping the Riches of the Tropical Andes

CARACAS, Aug 8 2009 (IPS) - The Ecosystems Map of the Northern and Central Andes could serve as a guide for environmental conservation of this South American area covering 1.5 million square kilometres and holding the world’s highest concentration of biodiversity. 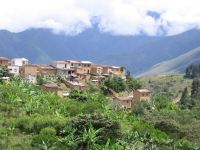 The tropical Andes, the stretch of the mountain range that includes the Central Andes (Bolivia and Peru) and Northern Andes (Ecuador, Colombia and Venezuela), were dubbed the “global epicentre of biodiversity” by British ecologist Norman Myers.

These riches “are distributed among 133 specific ecosystems that we have inventoried for our map of areas at more than 500 metres of altitude, of which 77 are in Peru, 69 in Bolivia, 31 in Ecuador, 22 in Colombia and 21 in Venezuela,” environmentalist Eulogio Chacón-Moreno, head of the project in Venezuela, told Tierramérica.

The map, initially presented in April, was conceived as a tool to “identify gaps and priorities for conservation in the national agencies for protected areas, and to develop a set of indicators that allows us to assess the state of conservation of the Andean ecosystems,” said Chacón-Moreno.

Such is the case of the “páramos”, treeless high plateaus “with a high percentage of endemic species, unique diversity for the way the species interrelate, and a highly important source of freshwater,” Vanessa Cartaya, of the regional Andean Páramo Project, sponsored by the Global Environment Facility, told Tierramérica.

Cartaya underscored that the intensification of land use, expansion of the agricultural frontier, growing urbanisation and increased demand for potable water, as well as climate change, “affect the páramos to a great extent, making it essential to determine which areas are the priority for action.”

The páramos are situated between 3,000 and 4,500 metres above sea level in the Northern and Central Andes, with temperature, humidity, sunshine, rain and wind factors that make them quite different from the lower altitude tropics that surround them.

The high altitude flower known in Spanish as “frailejón” (Espeletia neriifolia) is emblematic of this ecosystem.

“The páramo functions like a sponge, absorbing rainwater before filtering and releasing it” into other ecosystems, states the text that accompanies the map. The mountaintops hold remnants of glaciers and lakes that feed streams and springs.

The project was based on studies and maps available from national institutes, standardising their data. Some of the maps used are: the Vegetation Map of Bolivia, Map of Ecosystems of the Colombian Andes, Map of Ecuador’s Continental Ecological Systems, Forest Map of Peru, and the Map of Ecological Units of Mérida, Venezuela.

Plans are in the works to publish an atlas in 2010, with a preliminary version already available on the Internet.

The mapping effort is a contribution to the Environmental Agenda of the Andean Community trade bloc (Bolivia, Colombia, Ecuador and Peru) as a guide to design and coordinate policies among the national environmental agencies, focusing on three themes: biodiversity, climate change and water resources.

Backing the project are the Spanish Agency for International Development Cooperation, Spain’s Ministry of the Environment, and the Swiss Agency for Development and Cooperation. The work has been coordinated by NatureServe, a non-profit conservation organisation, and the Consortium for Sustainable Development of the Andean Eco-Region.

Chacón-Moreno said the mapping will pave the way for studies “to identify ecosystems with more intense dynamics and patterns of fragmentation, which will serve as input to guide conservation policies.”

Furthermore, experts will be able to “assess the vulnerability of Andean ecosystems through vegetation distribution models in scenarios of climate change and land-use change,” he added.

For example, the Institute of Environmental and Ecological Sciences at the Venezuelan University of the Andes, led by Chacón-Moreno, has studied the spread of the mountainous cloud forest to the heights of the páramos in the highest sierras of southwest Venezuela, with records from 1952 to 1999 “showing how the páramo area has been reduced with the passing of the decades.”

“The changes in vegetation cover demonstrate the effects of climate anomalies. In this respect, the map and the studies that support it allow the study across an entire region using a single standardised system of classification,” said the expert.

A database will be a “planning tool that contains information about biodiversity,” communities and ecosystems, according to Chacón-Moreno.

Of the 133 ecosystems identified, the most extensive is the High Andean Wet Scrubland (Puna Húmeda), covering nearly 10 million hectares in Peru and Bolivia, just 6.8 percent of which is officially protected.

“Human use has greatly influenced the structure of these landscapes, subjected over the centuries to tree cutting and cyclical burns, so criteria need to be developed to better evaluate the natural landscapes,” which would lead to better understanding of the conservation of the Central Andes ecosystems, says the report that accompanies the map.

The Tropical Andes run 4,000 km north-south. Few mountaintops are lower than 2,000 metres in altitude, and most of the landscape is steep inclines, deep gullies, vast valley floors, and sharp peaks.

In the Central Andes, a vast “altiplano” or high plain is formed at more than 3,500 metres above sea level in southern Peru and western Bolivia.

The altiplano’s towns and villages are home to more than 40 million people who rely heavily on the natural goods and services of the Andean ecosystems, including grains, fruit and vegetables produced in the area.

“The map has also been proposed as an information and education tool for communities about the potential of their surroundings and the importance of preserving it, in order to obtain clean water and sustenance, as well as enjoying the beauty of the landscape,” said Cartaya.