NAIROBI, Aug 6 2009 (IPS) - Roughly a billion dollars a year is spent fighting malaria. Using this money most effectively calls for a detailed understanding of exactly who is at risk – enter the Malaria Atlas Project (MAP). 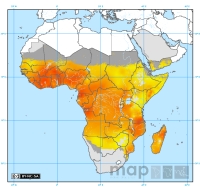 The first global map of malaria since 1968 shows 53 percent of the population of the Africa+ region – which includes Yemen and Saudi Arabia – lives in areas of high risk. Credit: Malaria Atlas Project

Just as the Global Malaria Action Plan was adopted in 2008, development of a new tool to assess the intensity of malaria was coming to fruition.

The Malaria Atlas tracks the presence of the malaria plasmodium – the mosquito-borne agent that causes the disease – generating a geostatistical map (relating statistical data to geographical areas) from a constantly increasing number of surveys that meet required standards – 14,000 at last count.

It is the first global map of malaria endemicity since 1968. The strength of the the techniques used is that the map is continually updatable while allowing users a precise measure of uncertainty.

The map divides the globe into areas of low, intermediate and high risk of malaria, corresponding to the frequency with which plasmodium falciparum is found in the bloodstream of people in a given area. In the Africa+ region – which includes Yemen and Saudi Arabia – 53 percent of the population lives in areas of high risk, 30 percent in areas of intermediate risk.

"For malaria control and elimination initiatives to be effective, financial resources must be concentrated in regions where they will have the most impact, so it is essential to have up-to-date and accurate maps to guide effort and expenditure," Robert Snow, a researcher with the Kenya Medical Research Institute-University of Oxford Wellcome Trust Research Programme, and his co-authors write in the Public Library of Science Medicine journal.

Kenya is still striving to address malaria control in areas of high endemicity. Exactly how to go about the next steps towards elimination is still being worked out. Elsewhere on the continent, where prevalence is lower, countries are now looking at coordinated strategies to progressively eliminate the disease. An example is the Eliminate Eight initiative in Southern Africa. Here resource questions could become more acute - at least one researcher projects that elimination will be more costly than control.

A study of funding for malaria prevention found almost a billion dollars was spent on malaria control and prevention each year between 2002 and 2007, 40 percent of this from the Global Fund. This is less than a dollar per person, considered against the 1.4 billion people living in areas at risk for malaria.

And this money is unevenly deployed.

Ten countries - among them São Tomé and Príncipe, Guyana, and Saudi Arabia - were estimated to be receiving more than four dollars per person for malaria prevention and control. But 34 others - representing half of the global population at risk - were receiving less than a dollar per person; 16 were getting less than 50 percent per head, including seven of the poorest countries in Africa.

Scientists and the international funding community have not yet decisively calculated the cost of moving from control strategies to elimination, so it is not yet clear if countries with conditions of intense transmission have higher financial needs than do countries that have reduced prevalence and are now moving to elimination and preventing re-entry. Malaria programmes are estimated to be underfunded by anywhere between 50 and 450 percent.

The accurate information about populations at risk and a precise description of disease burden that the Malaria Atlas Project provides is crucial; it is an invaluable resource in designing prevention programmes and guiding allocation of funding to execute them.


The objective of the map is to guide the intensity of interventions required to bring the disease under control in the high risk areas, monitor progress and steer the adoption of locally-appropriate interventions everywhere by 2010 in line with the World Health Organisation’s strategy.

Professor Bob Snow, one of the creators of the geostatistical map, told IPS, “What we do know is that the proper use of funds to protect people from mosquito bites and prompt use of effective drugs when someone is sick can massively reduce the burden of malaria – evidence from Kilifi shows that this can be done.”

Kenya’s malaria prevention efforts in and around the coastal town of Kilifi are instructive. Initially, the government only ensured availability of insecticide-treated nets through government clinics at a highly subsidised cost. But the fact that just a few could afford to pay the difference saw authorities in 2006 embark on a campaign to distribute the nets free of charge, as well as providing paediatric drugs in public hospitals. Malaria infection prevalence has since plummeted.

Prevalence in Kilifi and some areas of the coast now stands at only about one percent compared to almost 40 percent ten years ago, according to Snow.

Similarly, the health ministry in 2007 released statistics showing a reduction in deaths from malaria, as well as stipulating that the number of patients attending outpatient clinics due to malaria had fallen by 13 percent.

But though prevalence in some areas has declined, other regions of the country continue to record prevalence rates as high as 17 percent, according to information leaked to IPS from the 2007 National Malaria Indicator Survey.

“Instead of giving nets to only children and pregnant women, we want to ensure that the entire household has access to nets; then we can begin to say we are moving towards universal coverage,” said Willis Akhwale, head of the Department of Disease Prevention and Control within the Ministry of Public Health and Sanitation.

But resources are a problem in achieving universal coverage of locally-appropriate interventions.

“With the current resource levels, we are not able to achieve universal coverage. What we are achieving is really what we had set out to ourselves as targets; we had especially set out to target vulnerable populations,” he noted. He said about 100 million dollars is required to achieve the best impact throughout the country.