CUZCO, Peru, Aug 27 2009 (IPS) - Little by little, rural communities in southern Peru are beginning to take advantage of the internet to acquire new knowledge and increase their income. But the use of computers in rural areas faces numerous challenges, from illiteracy to fear of the unknown or questions about the sustainability of these new communications initiatives once they are left in local hands. 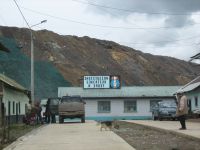 "I used to be scared to touch the computer, I thought I would break it. But now I check my e-mail three times a week," Teófila Anchahua told IPS. She lives in the town of Pucyura, where an internet facility known as a Commercial Information Centre (CIC) was set up a year ago.

In Pucyura, a half hour drive from the city of Cuzco, the internet has provided farmers of pigs and Guinea pigs – which are native to the Andean region and used as a source of food – with opportunities to expand their business operations, through information on new breeding techniques developed in other areas, recipes to promote their products at fairs, and contacts with potential buyers.

The dozen computers in this town of 4,500 people were installed by the government-run Puno-Cuzco Operations Unit, which among other initiatives is promoting the use of information and communications technologies (ICTs) as tools for development in rural highlands communities.

Up until now, internet facilities have been installed in 24 districts in the provinces of Arequipa, Cuzco, Moquegua, Puno and Tacna as part of the former Puno-Cuzco Corridor and Sierra Sur initiative, another government programme supported by the International Fund for Agricultural Development (IFAD).

This initiative, which received funding from IFAD until the end of 2008, was considered by the U.N. agency to be one of the most successful experiences undertaken around the world, since it made it possible for more than 80,000 families to develop value-added agricultural production activities through the use of the internet.

The successes and limitations of these initiatives and others implemented in different areas of Peru and Bolivia were presented at an IFAD-sponsored workshop held Aug. 14 in Cuzco, attended by 50 participants from organisations that use ICTs for development, government authorities, local community members and experts.

"In rural areas there are many challenges, because you have to deal with illiteracy, with guaranteeing the sustainability of the project through a commitment from the local authorities, and with a lack of capacity for maintaining the service," explained Luis Andrade of the Sierra Sur project.

Sierra Sur has approved 20 projects submitted by mayors of rural villages and towns, 18 of which involve the establishment of internet facilities.

This particular project has placed emphasis on providing internet connectivity, although the representatives of Sierra Sur recognise that access to the internet alone is not enough. Campesinos (peasant farmers) are not going to improve their livelihoods simply by sitting in front of a computer.

It is essential for complementary initiatives to be undertaken alongside these projects, particularly because of the high rates of illiteracy in rural areas, Andrade stressed.

The administrator of the CIC in Pucyura, Margot Huamán, explained to IPS that when non-literate community members take part in the computer courses offered as part of the project, she first uses the computer to teach them to read, and then moves on to basic computer skills.

Huamán, who is both a teacher and computer technician, is able to combine her two professions to teach both basic literacy and computer literacy. "I teach them the alphabet using the computer keyboard, and then teach them to join the letters together to make words, and then have them transcribe texts on the computer. It’s not easy, but we’re slowly making progress," she said.

Sergio Toro, the executive coordinator of the TICBolivia (ICTBolivia) Network, stressed that initiatives like these "must go beyond the use of a website."

In numerous rural areas of this neighbouring country, the use of modern ICTs like computers and the internet has been linked with community radio stations, the most widespread communications medium in these communities. For example, the internet is used to look up the latest market prices for farm products like soybeans, corn and potatoes, and the prices are broadcast over the radio to local farmers, who are thus able to negotiate fairer prices when they sell their goods.

The TICBolivia Network, founded in 1999, is a nationwide network of 24 organisations, which include campesino and indigenous organisations, government agencies and small business associations, among others.

Toro emphasised the need to develop ICTs "from the bottom up," capitalising on local knowledge. "If demand is there, the sustainability of these initiatives is guaranteed," he said.

When President Evo Morales took office in Bolivia in 2006, his first public event was the delivery of a shipment of computers to his hometown of Orinoca, in the southwestern province of Oruro.

As a teaching strategy, the townspeople learned how to use multimedia computer tools to tell the story of Evo, as the first indigenous president of Bolivia is normally referred to, Toro explained.

For instance, a natural sciences teacher worked with the townspeople to gather information related to his subject matter, such as the crops that are grown and the animals that live around Evo’s house. In this way, a wide range of local knowledge was compiled.

Using the same strategy, teachers from other subject areas gathered knowledge and information in other fields, from the same starting point: Evo.

The TICBolivia Network also encompasses a governance programme, which includes an initiative to encourage women to create their own blogs, as a means of promoting women’s rights on the public agenda and expanding the political participation of women.

"Women have made declarations and put forward proposals through these blogs that have subsequently been picked up by the authorities or the media," Bolivian indigenous leader Eliana Rioja told IPS.

The participants in the Cuzco workshop also stressed the importance of ensuring an intercultural component within these various ICT initiatives. The director of the Casa Campesina Programme at the Bartolomé de las Casas Centre in Cuzco, Valerio Paucarmayta, stressed the way in which individual community members share the information they glean from the internet with the other members of their communities.

"Most of the time the campesinos who look up this information don’t take anything back to their hometowns in written form. How are they able to disseminate this information in their own communities? How is this technology articulated with an ancestral means of communication like oral communication?" he commented to IPS.

The Casa Campesina offers accommodation to campesinos visiting the city of Cuzco, for a token fee of five cents of a dollar per night, and while they are there they are able to use computers and internet service free of charge. Many are illiterate Quechua speakers, and they often ask to look at pictures on the internet of places they would like to visit someday.

"Most ICT initiatives focus on market access, but there are people who solely seek out these tools to communicate with their families, with their social networks, so it is important to adapt these projects to the specific needs of rural areas," Paucarmayta stressed.

The Peruvian Studies Institute is developing an electronic platform to provide information and guidance for improving municipal government administration through online consultations, access to a municipal administration calendar and a databank of legal information.

Of the 953 municipalities involved in the project, 74 percent are in the poorest regions of the country. The web portal has become a free space for capacity building. However, it has also demonstrated that "the internet reproduces centralisation and inequalities, because those who use it most are usually those who have the greatest access to connectivity," said project coordinator Mariel García.

Between January and July 2009, only three percent of the 3,450 consultations logged by the portal came from municipal government officials. The vast majority were from specialists in municipal administration, who normally have access to the internet.

Moreover, the are that uses the service most is Lima, the capital. "The municipalities are the cells that make up democracy. To strengthen them is to strengthen the country," maintained Raúl Hopkins, a regional economist from the Latin American and Caribbean division of IFAD.

The most important allies to ensure that the use of ICTs prospers in rural communities are the local mayors, because they can incorporate them into their investment projects, he noted.

Hopkins acknowledged the progress made in Peru, but also pointed to challenges such as the need to develop ICT tools in local languages, increase the exchange of experiences with Bolivia, and strengthen the Southern Andes ICT Network in Peru.

He said there is also a need for greater emphasis on local knowledge in Peru, "and for this information to be mainstreamed, for example, in the school system, as is happening in Bolivia."