GAROPABA, Brazil, Aug 13 2009 (IPS) - In 1975, Brazilian nutritionist and paediatrician Clara Brandão introduced “multimixture” in the diet of 13 preschools in Santarém, in the northern state of Pará, and noted how the malnourished children gained weight and completed their schooling. Some even went on to university. 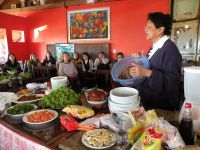 A drought multiplied the ranks of the malnourished in Santarém, prompting Brandão to study the local culinary customs and to found the Society for Research and Use of the Amazon. With support from other entities, she set up the preschools, for which she created a unique and varied diet, enriched with her special multimixture.

The mix includes bran, seeds, vegetables and crushed eggshell. It is based on the principle that quality is linked to variety and not just to beef, chicken or fish on the dinner plate, Brandão explained to Tierramérica in a recent interview.

“There are no strong or weak foods, only complementary foods,” is the slogan of Clara Terko Takaki Brandão, born 67 years ago in the southern state of São Paulo to a family of Japanese immigrants.

Daily dishes can be enriched with natural products that are abundant according to the season, which reinforces local agriculture, and improves human health and the economy of each community, she says.

Brandão has taken her ideas to towns across Brazil. Her plan to fight malnutrition, which has won her several awards, has been extended to all Brazilian states and to more than 15 countries. This month, she visited Santa Catarina, in southern Brazil, to share these lessons with schools and restaurants in Garopaba, a beach town on the Atlantic coast.

TIERRAMÉRICA: How are the concepts of food sovereignty and security and health connected? CLARA BRANDÃO: I began to work on food security with indigenous health agents in Mato Grosso (west central Brazil). When you consider this matter it’s interesting to include the question of food sovereignty, the right of each community to use their traditional foods, carried out through public policies.

That was where I began the work with the seasons of the year. For example, in Rio Grande do Sul there are in fact four distinct seasons. We used all of the foods that exist in that region in each season, based on local culture, medicinal plants and traditional meals, and analysing the diseases specific to each climate.

That makes it easier to make food security work: you find that if you use the foods particular to the season and the region, as well as using fewer chemical additives, they are cheaper, and more abundant, and meet the biological needs of promoting health in that specific period of the year.

TIERRAMÉRICA: How is food sovereignty to be applied in education? CB: Today we distribute 37 million school lunches. If there were truly a healthy, regional diet, in five years we could have a much more active population.

When designing a policy like this, they don’t take into account food allergies, especially to lactose and gluten. And meanwhile, manioc root (also known as cassava or yucca) today sells for 87 dollars a ton, which means that the grower is paying for us to consume it.

That tuber is the only organic food to which the poor in all parts of Brazil have access, but it is unlikely to become part of the school diet. One of the reasons is its storage and preparation.

If you have a school with 600 students and two lunch shifts, it is impossible to include manioc. Between the time it is harvested to the moment it reaches the student’s plate, it loses up to 80 percent of its nutritional value. That is where the chain of production comes in, and the need for a policy that allows a farmer to deliver the manioc already peeled, and when possible vacuum packed, so nothing is lost. Then we could serve a top-quality food and ensure that the farmer can keep working.

TIERRAMÉRICA: We eat the root of the manioc. What nutrients do its leaves have? CB: A study by the University of São Paulo showed that manioc leaves have half the selenium found in the Brazil nut. Selenium is a powerful antioxidant, slows aging, boosts immunity and maintains fertility.

If we could use all of these products that otherwise go to waste, can you imagine the nutrients we’d have? With four or five kilos of fresh manioc leaves you get one kilo of powder, which can be stored for months or even years, depending on how it is preserved.

TIERRAMÉRICA: Has Brazil embraced the idea of food security? CB: The only state that has created a Food and Nutrition Secretariat is Tocantins. In the last 15 years, food councils have been set up in all districts. But they are focused on filling people’s stomachs, while what we seek is quality.

If the food were healthful and balanced, we would eat, on average, 30 percent less. Micronutrients are fundamental in the problem of violence. You could have a deficiency of micronutrients in your body and an excess of heavy metals, like lead, mercury or aluminium.

Lead tends to cause hypertension and is linked to selfish and aggressive behaviour. A diet rich in minerals, vitamins and fibre helps neutralise some of the toxic effects of heavy metals, and therefore reduces violence.

TIERRAMÉRICA: And diet can prevent diseases… CB: Yes. Now, for example, there is panic about the H1N1 flu. It’s important to avoid crowds of people. But we must also say: eat five kinds of fruit and five kinds of vegetables every day, increase fibre intake, exercise, and take in some sun. Squeeze lemon juice on food, because just like dark green raw leafy vegetables, it is high in vitamin C, which helps absorb iron and bolsters immunity.

TIERRAMÉRICA: How can restaurant owners be convinced of the benefits of including these foods on their menus? CB: A restaurant should define its purpose. Is it to just earn money or also to be part of an effort to improve people’s diets? If they prepare quality foods, they can advertise their organic products, include a graph about the difference between lighter and darker coloured vegetable leaves, offer sesame and bran and show that the customer is going to ingest fewer calories.

They can provide information that with two or three spoonfuls of rice oil, which contains a substance that improves memory, one can reduce cholesterol up to 40 percent. If you have the opportunity to taste a high-quality food and you eat less, pay less and are less likely to become overweight, everyone wins.