RIGHTS-SOUTH AFRICA: Women Want Land to Call Their Own 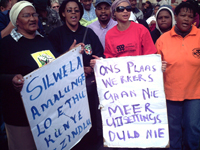 Women farm workers say they can support themselves if they are given access to land. Credit: Davison Makanga/IPS

A democratic constitution has replaced apartheid laws, but the reality on the ground suggests freedom and equality for all has not yet been attained.

Fifteen years after apartheid was replaced by non-racial democracy, South African farm workers say they still face discrimination. The final week of July saw a coordinated series of protests by farm workers in the Western Cape against poor working conditions, retrenchments and evictions.

The week of protest beginning Jul. 27 was led by Sikhula Sonke, a woman-led farm worker union, and the Women on Farms Project (WFP), a farmworker support organisation which Sikhula Sonke split from last year.

The disgruntled farm workers staged demonstrations at several farms, held a night vigil outside the Parliament buildings in Cape Town and picketed near the venue of the annual Stellenbosch Wine Festival, which attracts local wine and international wine enthusiasts.

"They should give the farms to workers and bring in the government so that the farm workers can be shareholders and make them BEE farms," she said.

A memorandum to President Jacob Zuma, calling for urgent land redistribution, was accepted on his behalf by Western Cape provincial manager in the presidency Charles Ford.

Fifty-two-year-old Esmeralda Jacobs has worked on farms for over two decades, living in squalor. She said owning a piece of land would restore some dignity.

"I have children and I have worked for many years at the farm but without having something that I can call my own, it is dehumanising," said Jacobs

A 2004 study by the Nkuzi Development Association and Sikhula Sonke showed roughly a million black workers had been evicted from farms in the decade following 1994, and there are no signs the trend is slowing.

Government programmes for redistribution of land are underfunded and behind schedule; minimum wages for farmworkers are routinely flaunted by landowners.

Last year, members of the Rawsonville Women’s Agricultural Cooperative occupied part of a farm, citing government’s slow movement on land reform. While the land owner is willing to sell them a piece of the farm, the group blames the Lands department for dragging out the funding and formalisation process.

"It’s very difficult to get land. Farm owners sell to each other instead of building the capacity of emerging black farmers. So what we did was a symbol to show the government that we are very serious about the land issue," declared Roseline Presence of WFP, which supports the Rawsonville Women’s Agricultural Cooperative.

Presence said women were capable of producing if given resources. She cited, as an example, a group of women in Stellenbosch which is living off a leased piece of land they have turned into a vegetable garden.

"The women are farming and selling the produce. This shows that if given their own land, they can do more," said Presence.

However, critics say with the government's slow pace and inadequate national budget allocation for acquiring land for redistribution; the chances of land provision to the farm workers are slim.

"To date, government hasn't prioritised farm workers for land provision, I don't think that is going to change because government's vision of land reform to date has been one of large scale commercial farms, there are very few cases of land subdivided into small units for the poor," said Professor Ben Cousins, director of the University of Western Cape's Institute for Poverty, Land and Agrarian Studies.

"However, the key to getting land reform going in South Africa is from the grassroots, if they (farm workers) continue to mount political pressure, demand for small plots of food production might be possible."

"Workers are paid wages that are way below minimum and despite working hard. For instance at a horticulture farm in the Western Cape, which produces beautiful flowers but workers living in pigsties," Govender said.

Sikhula Sonke’s Coetzee said the country's progressive laws to protect farm workers would only be meaningful if enforced by the government. She blamed the government's labour and land departments for not responding to their queries in a timely fashion.

"They only talk and seem to understand on the phone but you will never see them on the farms, if the Labour department inspectors are few, then the government should recruit more," said Coetzee.

Also critical is government's speedy reaction against rising evictions and retrenchment. According to Sikhula Sonke, farms that producing export crops such as grapes and flowers are shedding workers due to plummeting business in foreign markets. The farm workers’ group says the government should either bail out the ailing farms or urge the owners to cut costs by means other than retrenching.