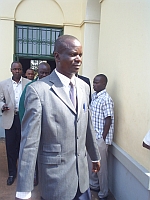 It took one shot, a bullet through the eye, to end Christine Apolot’s life.

And even though her police commander husband confessed to the crime and handed himself and the murder weapon over to the police, he still was not charged with her murder. Instead, he was granted bail. The reason: one of the six witnesses in the case was too scared to testify.

It was a move that left gender groups asking if the justice system in Uganda could really protect the rights of victims of domestic violence. They wanted to know if women are really safe in their homes and in their relationships.

But in a surprising turn of events – believed to be due largely to the protests of gender groups in the country – District Police Commander, James Peter Aurien, was re-arrested for the murder of his wife this today.

It was a brighter morning as the Scales of Justice seemed to move into balance as Aurien was re-arrested. He is being held in police custody, according to local news. And women activists have claimed the success for this development.

"Yes, I believe that the public protest, with women voices loud and clear was instrumental in ensuring that justice is done," The Uganda Association of Women Lawyers’s (FIDA) Chief Executive Officer, Maria Nassali, told IPS.

"There is sufficient evidence to put Aurien on trial to prove to the world whether or not he killed his wife. We shall continue to observe and monitor the proceedings," she said.

Until today, many activists had been outraged by what they saw as the special treatment Aurien had received during the investigation.

Aurien is alleged to have accused his wife, Apolot, of infidelity and murdered her in April. He killed her at their home in Mukono police barracks, east of the capital Kampala, while her younger sister Hellen Ruth Akello helplessly looked on.

The next day, Aurien vanished after dumping Apolot’s body by the post office block. Later that day, however, he confessed to the crime and handed himself and the murder weapon over to the police. He was detained by the police.

He was charged with murder and legally, his confession and the murder weapon was evidence enough to convict him. In Uganda murder is a capital offence and its penalty is death. But despite the overwhelming evidence against him the police boss was released on bail in July, amidst protests from activists.

The Director of Public Prosecution withdrew the charge against Aurien because of a failure to trace the key witness, Akello. She had mysteriously disappeared.

Dismayed activists raised concern in the hasty manner in which the case was handled, interpreting it as a failure of the justice system to protect the rights of victims of domestic violence.

"We as women are concerned about our safety in our homes and relationships. What message is this sending out about how the government of Uganda values women or takes its role of protecting its citizens seriously?" said a statement from the Domestic Violence Bill Coalition, a group of organisations advocating for the Domestic Violence Bill in Uganda.

"If the justice system could not prosecute a case that had very useful clues such as Aurien’s, does it mean that the justice system perceives domestic violence against women as normal and therefore not to be taken seriously?" the statement further read.

Several women rights organisations raised their voices: FIDA called the state of affairs, ‘the paradox of the case of Christine Apolot’ considering that in spite of evidence, a murder suspect could be given bail.

"While FIDA supports the expeditious hearing of court cases, the hasty manner in which this case was resolved did not reflect the magnitude of the matter, which involved the death of a person. It further leads to an assumption that due diligence was not exercised possibly because the accused was a high ranking policeman," read a statement from FIDA.

The Centre for Domestic Violence Prevention (CEDOVIP), a Non Governmental Organisation in Kampala, referred to it as the ‘continued impunity for domestic violence crimes.’

"We raise our concern because violence against women has not been taken seriously among women in Uganda. It (cases of gender based violence) keep happening and they (the reported cases) keep dying like that. There are many cases where prosecution of suspects has failed and these normally involve violence against women," said Hope Turyasingura, Technical Advisor of CEDOVIP.

She questioned how society could gain confidence in the judicial system when police officers were now committing crimes. "This is a senior police officer who is in charge of protecting people and ensuring that lives and property are secure and he is the same person violating it and then he is set free?" she asked.

Activists also argue that the ‘disappearance’ of just one witness, Akello – whom they allege could have been intimidated against testifying – was not sufficient enough to release Aurien. There were five witnesses to testify including forensic evidence like the pistol that Aurien handed to the police. He had also handed himself in.

"These are loop holes they (the judicial system) created. How could they give Aurien bail when they knew that what he committed is a capital offence? Yet we hear of people who have been in prison for five to 10 years, never brought to court because they are still carrying out investigations. So who is Aurien?" she asks, alleging that his case is being given special treatment.

"For sure we are angry and sick and tired of running around. All these (things) are happening because of the less(er) value that is attached to women," Turyasingura said.

Nassali thinks the law is merely not supportive of victims of domestic violence and women in general. "The law as it is seems to give the suspect all the opportunities to escape justice. And in most cases involving Gender-Based Violence, the victim is put on trial, is embarrassed and there is no recourse," she told IPS in an interview.

"The law is also not supportive of women who are violated. It is so difficult to get legal redress. At the same time, in the particular case of Aurien, there are so many gaps," she says.

Nassali also expressed concern on the weak investigation methods used in cases of domestic violence as well as the lack of protection for witnesses: "How is forensic evidence taken and preserved? Where is the pistol? In terms of victims of rape, where do they put those garments that are found on their body which could directly link the accused to the crime? All those facilities and resources are not available," she says.

However, Aurien’s case is not the first of its kind. There has been several other high profile people dragged to the courts over domestic violence cases but these have not been prosecuted.

In 2006, a top city lawyer, Robinah Kiyingi, was brutally murdered at the gate of her house. Her ex-husband, a renowned businessman, was the prime suspect. But the case hit a hurdle after the key witness mysteriously died while in police custody.

Early this year a Member of Parliament, Hassein Akbar Godi, allegedly shot dead his 21-year-old wife accusing her of infidelity. However, Godi is also a free man after a court granted him bail for lack of sufficient evidence against him.

"So many cases (of gender-based violence) have happened and we have not seen them successfully being prosecuted. So what is the matter with them? Does it mean that women do not matter in this nation?" Turyasingura asks.

Domestic violence is a daily occurrence in Uganda. Statistics from the Uganda Law Reform Commission show that 78 percent of women experience some form of domestic abuse.

Police records reveal that in 2008 alone over seventy women were killed by their spouses. And the numbers are on the increase, police officials said. According to FIDA, so far, 30 cases against domestic violence have been registered at their offices since 2008. In the majority of these cases, there has been no conviction.

"Government is the main duty bearer and it has the responsibility to protect all people in the society. We will monitor government to ensure that it complies with its obligations… and we are going to observe the proceedings in terms of ensuring that the victims (of domestic violence) get redress," Nassali said.

Nassali said the successful prosecution of Aurien’s case was critical for the positive launching of the Domestic Violence Act.

"It will mark the beginning of the end to impunity for violence against women. It would also reaffirm that no person is above the law. Our interest as women lawyers is to uphold the rule of law," Nassali said.