TOURISM-COSTA RICA: Much More Than a Walk in the Countryside

SAN JOSÉ, Aug 16 2009 (IPS) - Some 3,000 people make their living from rural community-based tourism in Costa Rica, according to the association of tour operators who connect visitors to the delights of rural life. 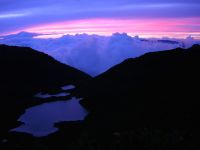 Known elsewhere as agro-ecotourism, Costa Rica has been at it for 18 years. A law enacted Jul. 17 by President Óscar Arias aims to make this alternative a permanent and growing endeavour.

“We promote close interaction between the visitor and the local community” and there is a certain degree of natural adventure, which small farmers and indigenous people experience day-to-day as they provide tourism services, Mario Ordóñez, marketing manager for the specialised travel agency Simbiosis Tours, told Tierramérica.

“The tourists cross the same hanging bridges that the community members use, or ride horseback as part of a normal workday. None of it is specially organised or staged only for the tourist,” he explained.

The difference between community-based tourism and ecotourism is that the latter “delinks the cultural aspect from the activity,” Ordóñez added.

This kind of tourism is an “advanced” form of ecotourism “because it places special emphasis on land ownership by local residents, giving it added value,” Kyra Cruz, president of the National Chamber of Rural Community Tourism, told Tierramérica.

The Bribrí indigenous community, in the Talamanca Mountains, were a pioneer in this type of tourism.

The area is located in the eastern province of Limón, and extends from the beaches of the Caribbean Sea to the south-central part of the country. The Bribrí, who number around 10,000, live in the Upper Talamanca valley.

In 1987, in the wake of the crisis of cocoa crops and low prices for bananas, “we organised to see if we could improve banana production, and set up a telephone system and began the tourism initiative,” Guillermo Torres, manager of the Yorkín Natural Adventure organisation, told Tierramérica.

According to Torres, today there are 18 families that make a living from this enterprise. They have a lodge for 25 people and are building an eight-room inn. They also offer a canoe trip to transport bamboo on the Yorkín River and activities ranging from craft-making to cocoa farming and archery.

It has also been a boom to the Bribrí language “because we teach words to our visitors,” said Torres. The emphasis on the culture of each community is one of the things that attract people to this type of tourism.

The new law is intended to regulate a growing activity, which is characterised by small-scale operations. “Until now, in order to benefit from the tourism initiatives law, they required a minimum of 10 hotel rooms, and 98 percent didn’t reach that number,” said Cruz.

The new legislation lowers the minimum to three rooms for eligibility for aid, which includes tax exemptions, facilitation of paperwork by local governments and promotion of “the importance of this model of sustainable tourism,” she said.

“The law is going to be very important if the regulations are truly effective and not too bureaucratic,” Cruz added.

In the opinion of Marcy Arrieta, promoter of this kind of innovative tourism at the government’s Tourism Institute, the legislation “recognises the effort the country has made over the past 18 years,” as well as the quality of the services, which have a social and economic foundation “highly suited to further development.”

Community-based tourism “has become a model, extending beyond our borders,” Arrieta told Tierramérica. It has been successfully exported to other Central American countries, as well as to Colombia, Peru and Chile.

Gonzalo Vargas, president of the National Chamber of Tourism, described the benefits of rural community-based tourism this way: “The capital that is invested is nearly all Costa Rican, and better yet, from families with limited resources,” which reassures the visitors that they are consuming a product that improves the quality of life of the local people.

Furthermore, an incredibly high percentage of each “colón” (the national currency) that is spent on these services remains in the family or the community, he said.

Of the 43,000 hotel rooms in Costa Rica, just 1,000 are found in the community-based tourism sector, said Vargas. The average is four or five rooms with a total of 10 to 12 beds, especially at the bed and breakfasts.