WOMEN-MALAYSIA: Top of the Class, Nowhere in Politics 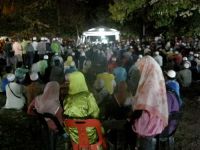 Women take the backseat at a campaign meeting for the Aug. 25 byelection Credit: Anil Netto/IPS

Tuesday night, a candidate from the opposition Pakatan Rakyat (People's Alliance or PR) defeated a candidate from the ruling Barisan Nasional (BN) coalition in a semi-rural constituency on mainland Penang. That brought the by-election tally to 7-1 in favour of the PR since the last general election in March 2008.

These by-elections are important barometres of public opinion. The opposition Alliance is hoping the by-election momentum will catapult it to victory in the next general election after it deprived the BN, which has ruled the country for 52 years, of its coveted two-thirds majority in Parliament last year.

But there is one glaring statistic: in each of these eight by-elections, neither of the main political coalitions has fielded a woman candidate.

Women did stand as independents in a couple of by-elections but did not make much headway against candidates from the established parties. The failure of these parties to put up women candidates, however, is puzzling.

It's not as if women are not interested in the ele ctoral contests or politics. Both coalitions are made up of political parties with active women's wings. A record number of women – many of them first-timers – were fielded in the 2008 general election with some of them, especially from the PR, successfully entering Parliament and the state assemblies.

One possible reason for their absence in the by-elections is the sheer intensity of these local contests. ''These by elections are fierce, nasty fights,'' observes political analyst Bridget Welsh, editor of the book 'The Mahathir Years'. "There is also this paternalistic approach of wanting to protect the women."

Moreover, she points out, the substance of by-elections – which tend to focus on material development and personal attacks – often do not strike a chord with the interests and issues that matter for many women.

Still, women have come some way in politics. In the 1999 general election, a Woman's Candidacy Initiative (WCI) fielded a trailblazer, the late Zaitun Mohamed Kasim as an independent candidate – the first to contest on a gender equality platform in a general election.

Although she lost, she slashed the BN's previous winning majority, capturing 46 per cent of the popular vote. The WCI has been campaigning for women to make up 30 percent of election candidates.

There's a paradox of sorts at work as well. Malaysians girls are outperforming their male counterparts in schools and universities; nearly two thirds of undergraduates are female.

Strong traditional cultural barriers and conditioning, a lack of resources and unequal sharing of household responsibilities prevent many women from running for office whether in electoral contests or for party leadership positions.

Cultural conditioning could include the thinking that women have to play second fiddle to men in public life, especially politics.

"Girls are doing much better until the tertiary level with a higher career path," observes Maria Chin Abdullah, the executive director of Empower, a public awareness group. In 2004, the ratio of girls in tertiary education to that of boys stood at 1.31, according to the United Nations Development Programme (UNDP).

But, in her studies with rural schools, Maria discovered a prevailing attitude which accepted that boys would be the head prefects and class monitors – unlike the thinking in more urban areas. This acceptance of boys as the heads is then reinforced in families. ''The perception is that we expect the males to be the head of the families with bread winner responsibilities,'' she added.

In the current government Cabinet at the federal level, only a couple of women are full ministers, marginally down from the three in the previous administration.

In 1995, Malaysia signed (with reservations) the Convention for the Elimination of All Forms of Discrimination against Women (CEDAW), which contains a 30 percent quota for women's representation.

Such quotas and affirmative action policies are seen as a necessary first step towards realising gender equality in political participation.

But even that could be easier said than done, as nearly all major political parties are male-dominated, especially in their key leadership positions and party election structures. In the 2008 Global Gender Gap Report, Malaysia slipped to 96th spot from 92nd a year earlier and 72nd the in 2006.