AFRICA: "Have Your Own Policies, as Long as They’re Like Ours"

JOHANNESBURG, Sep 9 2009 (IPS) - The controversial conditionalities attached to World Bank and International Monetary Fund (IMF) loans over the past 20 years may, from the World Bank’s point of view, no longer be necessary as African countries are of their own accord imposing similar policy restrictions on themselves. 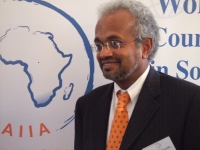 Speaking yesterday in Johannesburg, South Africa, World Bank chief economist for the Africa region, Shantayanan Devarajan, said over the past 10 years there has been a shift away from imposing conditions in return for loans.

Countries can now present their own macro-economic policy suggestions when applying for funding from the World Bank, he told an audience at the South African Institute of International Affairs, attached to the University of the Witwatersrand.

Tanzania, a country known for a conservative policy approach, presented such a plan after the onset of the global economic crisis when it applied for finance for its emergency rescue programme.

The Tanzanian plan limits government guarantees to failed banks to two years – a far more cautious approach than that of the U.S. stimulus packages, where no such time limits exist.

"The Tanzanians delivered a plan and said what is wrong with that?" said Devarajan.

"The balance is shifting. What has happened in response to the crisis is that some additional finance has required no additional conditionality. The (International Monetary) Fund has moved in this direction too, monitoring outcomes rather than imposing conditions. I think conditionality as an issue has left us.

"We are not wedded to say you have to do trade reform to get finance. I really believe countries will do what is in their best interest and will challenge the Bretton Woods institutions (the World Bank and the IMF) and ask (when presenting their own marco-economic policy suggestions), ‘what is wrong with this?’"

The question, however, remains whether countries that apply for funding may believe it is in their best interest to match proposed policies with what they believe donors want to hear – particularly if their options for funding are becoming increasingly limited.

Even if countries are presenting their own macro-economic policy suggestions, rather than the World Bank or IMF drawing up conditions, the eventual outcome may not change.

The World Bank and IMF are unlikely to accept policies that are significantly different from the conditions they had imposed in the past, sticking to what they consider prudent. "There are countries following egregious economic policies – and surprise, they are not getting money either," confirmed Devarajan.

He also confirmed that the macro-economic policies developing countries are presenting in the wake of the economic crisis have not changed from those presented during the previous 10 years.

"One would think it would change, but when I look at what actually happens that is not the case," was Devarajan’s response to a question from IPS.

As pressure increases and funding options decrease, the global economic crisis may see more developing countries turn to the World Bank and the IMF for loans. This puts the terms on which the Bretton Woods institutions provide funding and the impact of those terms back in the spotlight.

"It is not clear what will happen with foreign aid. However, the experience in previous crises is sobering," explained Devarajan. "Sweden, Finland and Norway all experienced economic crises in the 1990s. The Scandinavian countries are all strong donors, but their foreign aid contributions fell by more than 10 percent. It took five years to recover."

A decrease in income from remittances places further strain on African economies, as the crisis originated in the remittance-sending countries. A total of 75 percent of Africa’s remittances come from the U.S. and western Europe.

The crisis has also led to a decrease in tourism to Africa. Between January and April Kenya saw a seven percent drop in tourism while the Gambia saw a 32.4 percent drop. Tourism to the island state of Mauritius decreased by 9.9 percent during the first three months of the year alone. Lesotho gets 29 percent of its gross domestic product (GDP) from remittances.

During a recent meeting in Cape Town, South Africa, Deborah James, director of international programmes at the Centre for Economic and Policy Research (CEPR) based in Washington, U.S., accused the IMF of attempting to reinvent itself with the global financial crisis.

It was using the opportunity to promote policies that exacerbate the recession by shrinking rather than growing economies.

After the IMF’s lending dropped to its lowest level in 25 years, the Group of 20 meeting at the beginning of April this year gave the faltering organisation a new lease on life. The G20 leaders decided to make 750 billion dollars available to the IMF, ostensibly to help countries battling with recession.

According to James, the loan policies that the IMF is enforcing are, however, still the same as before: contracting, not stimulating economies.