KINSHASA, Sep 18 2009 (IPS) - “We produce electricity but we manage darkness. We have big energy sources of electricity but only 20 percent of the population has access to electricity because most of the energy is sold to foreign countries.” 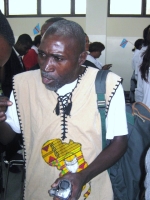 Victor Nzuzi Mbembe: "Are we privatising for the sake of privatising?" Credit: Stanley Kwenda/IPS

These are the words of Georges Bokundu, who works with the Open Society Initiative for Southern Africa (OSISA) in the Democratic Republic of Congo (DRC).

He added: “The people in the Bakongo region have seen lines of electricity being put in. These lines pass over their heads. The electricity will be going to Congo-Brazzaville, Zambia and Zimbabwe. For so many years they have seen these electricity lines but they have never seen a lit electric bulb.”

In 2008, the DRC’s government announced its intention to privatise a number of public enterprises, arguing that the move will help make them profitable. But the big question that the people of the DRC want an answer to is whether they will benefit from the proceeds of the sale.

“Are we just privatising for the sake of privatising?” Victor Nzuzi Mbembe of the Kinshasa-based social justice organisation, Platform for Development, asked in an interview with IPS in the Congolese capital.

For Nzuzi, the DRC tells the story of Africa in “a very sharp way”. Despite the fact that the continent is rich in mineral resources these riches are not benefitting Africans. The same is happening in the DRC.

He said the people of DRC are suffering from “a colonial hangover” as “65 percent of businesses in the DRC are owned by multinational companies”.

Currently there is growing opposition from civil society groups in DRC over the proposed takeover and joint venture projects that President Joseph Kabila’s government is negotiating with Chinese companies.

The Platform for Development pointed out that the DRC government has already accepted nine billion dollars in investments from China, to be spent on mining and infrastructure, despite the opposition of the International Monetary Fund and civil society groups in the DRC.

This new joint venture — to become operational in 2011 — is reportedly set to produce up to 400,000 tons of copper and 19,000 tons of cobalt per annum. Several other DRC companies will also work in joint ventures with China Railway Engineering Corporation and Sinohydro Corporation. These received funding from China Exim Bank.

Bokundu told IPS he is not satisfied with this arrangement: “It’s privatisation under the cover of joint ventures.” His organisation wants a review of laws that guide the privatisation of public enterprises.

“When we demand reform of public enterprises there is a reason why we do that. Our constitution says we must safeguard our resources and all things that are done in Congo must be for the benefit of the people,” Bokundu argued.

“The laws are clear on how and when public enterprises can be reformed but they are not followed.” Bokundu said some of the companies in investment, telecommunications, finance, energy, transport and mining sectors, which have been privatised since 2002, are making huge profits of billions of dollars.

“These organisations are said to be paralysed when they are making money. The private sector in the DRC and government officials are working in cahoots with big international firms to plunder the resources of the Congo through the privatisation of state property,” exclaimed Bokundu.

He said the existing legal framework is more favourable to international firms to exploit the DRC economy than to benefitting the people of DRC. “Our demand is that nothing should be done for us without us.”

The system of monopoly capital should be addressed and the DRC government should cancel all contracts issued to private companies before the setting up of the DRC unity government in 2006.

The DRC government is currently reviewing mining contracts awarded foreign companies during war time which many people believe were acquired in a fraudulent way but many foreign companies in the DRC are refusing to co-operate.

When state-owned mines were privatised during the mid-1990s, large international mining companies rushed to stake a claim to Congo’s mineral wealth, which includes cobalt, copper, diamonds, gold, silver, tin and coltan, essential for use in cell phones.

The trail of tainted minerals has been well-documented in the DRC’s most recent wars. Fighters on all sides got supplies of food, money, and military hardware in exchange for smuggled resources.