ECONOMY: "Africa Is Paying Most for a Crisis Not of its Making" 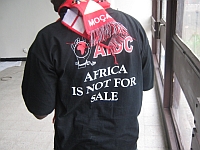 An activist shows off a popular slogan. Credit: Stanley Kwenda/IPS

Research undertaken by the Cape Town-based Economic Justice Network (EJN) shows that cotton farmers’ earnings have been whittled down to just a quarter of what it used to be before the outbreak of the financial crisis last year.

Percy Makombe, programmes manager at EJN, told IPS that a cotton farmer who was paid 0.54 dollars per kg before the financial crisis was being 0.23 dollars now. EJN is attached to the Fellowship of Christian Councils in Southern Africa (FOCCISA).

For Makombe, who was speaking at the fifth summit of the Southern Africa People’s Solidarity Network in Kinshasa this past weekend, this is the opportunity for African people to confront capitalism and re-write the world order.

He noted that the entire region is paying for the meltdown, which was configured in western capitals and signifies a breakdown in the capitalist system. There is need for radical reform of the International Monetary Fund (IMF) and the World Bank. These institutions need to comply with the unique needs of the region, failing which the region should leave the window open to pull out of them.

A new policy space should be created with the aim of promoting a South-South trading zone that will buffer the failures of the IMF and the World Bank, Makombe told IPS.

He added that the capitalist system was very harsh to the extent of forcing the poor to pay for the chaos created by the rich. He cited the case of Malawian cotton farmers who are not receiving bail-outs such as what were being given to the international financial conglomerates, despite the fact that their livelihoods are being wiped away.

The global financial crisis has been devastating effect for the DRC. With a background of chronic wars, disease and lack of food, the DRC has more than enough issues to worry about.

Poverty is written all of the country. It is quite visible in the sprawling city of Kinshasa were millions live on begging and crime.

For the DRC, it has proved to be a lesson in natural resource governance and that dependence on primary commodities leaves a state particularly vulnerable. The mining and logging sectors have been hit hard by the downturn. Fourteen copper mines have closed down. But the most devastating events have been in the less discussed informal sector.

According to the South African Institute of International Affairs (SAIIA), a think tank attached to the University of the Witwatersrand, an estimated 300,000 artisanal copper and cobalt miners in Kolwezi lost their livelihoods due to the fall in copper and cobalt prices on the world market.

"Compared to purely extractive mineral resources, a tree might well have greater global value and utility left in the ground than it would be as a cabinet or a table," said SAIIA in its recent critique of the effects of the financial crisis on DRC.

According to the Africa Trade Network (ATN), the continent lost trade earnings of 251 billion dollars. African governments will lose about 19 billion dollars in custom revenues.

The currencies of some of Africa’s big economies such as South Africa, Ghana and Nigeria continue to depreciate in value while much needed remittances from Africans in the diaspora, which are the life blood of many families, are drying up.