ECONOMY: "Put Africa on the G20 Agenda in Pittsburgh"

CAPE TOWN, Sep 24 2009 (IPS) - With South Africa being the only African country with a seat on the Group of 20 (G20), while serving as co-chair of the working group on reforming the International Monetary Fund, it has "a moral obligation towards the continent to call for more responsible management of the global financial system". 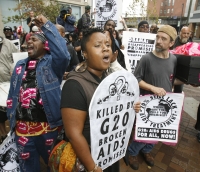 The general consensus is that the Pittsburgh G20 summit (Sep 24 – 25) will be dominated by talks on how financial systems can be managed to prevent another economic crisis.

GCAP sent an open letter to Gordhan in which the issue of prudent management of the global financial system is addressed. The letter insists that the G20 focus on improved regulation of corporate governance, financial reporting and banking, according to GCAP spokesperson Rajesh Latchman.

"By promoting such a system you (Gordhan) will ensure that recessionary pressures will be detected sooner and knock-on effects on emerging economies in the global South can be avoided or at least minimised," the letter stated.

GCAP further asks that G20 countries provide additional resources for poor countries to deal with the financial crisis without setting harmful conditionalities. "We realise that Minister Gordhan will be fighting a difficult battle but we hope that he raises these issues at the summit," Latchman said.

While some have thought that African countries would be protected against the global financial crisis, it has proven not to be the case as African countries have seen a decline in gross domestic product (GDP). South Africa has also been affected, with thousands of people losing their jobs as companies cut costs.

"Although South African banks have not been drawn as deeply into the global crisis, it has an interest in a stable world economy. South Africa therefore also has an interest in global banking regulations and the way bonuses are paid to executives," Daryl Glaser, associate professor in Political Studies at the University of the Witwatersrand in Johannesburg, South Africa, told IPS.

One of the issues South Africa should lobby for, argued Glaser, is the increased representation of South Africa and other African countries on bodies like the International Monetary Fund (IMF) and equitable rules and regulations for all countries regarding trade issues.

"I get the sense that (South African) President Jacob Zuma is more protectionist than his predecessor Thabo Mbeki. South Africa lifted protective trade barriers too quickly in the 1990s. This is one of the contributing factors to the country's high rate of unemployment. There is some room for a moderate degree of protectionism to prevent a country from becoming too vulnerable."

Pressure should be put on international bodies to honour their commitments to help African countries out of poverty. "In sub-Saharan Africa, aid will continue to be an issue.

"It has also been pointed out that when eastern European countries were given financial support, this was done with less strings attached than has been the case with financial assistance to countries in the South," added Glaser.

Francis Kornegay, a research associate in International Relations, told IPS that he did not expect "any major north-south cleavage on how to regulate the global financial system" at the Pittsburgh summit.

"I believe the G20 Summit will see more consensus than differences on that score. But all countries have individual reform agendas regarding the regulation of financial markets. South Africa has the advantage that the banks here did not get overexposed in exotic financial engineering."

Meanwhile, the African Development Bank (AfDB) has asked the G20 Summit to increase the bank's resources so that it can meet African countries' increasing demands for funding.

In a video statement from Tunis, Tunisia, the AfDB’s president, Donald Kaberuka, reminded the G20 not to leave Africa and low income countries behind as the world economy "shows signs of recovery".

The AfDB expects its investments in 2009 to double from 5.8 billion dollars last year to 11 billion dollars this year. This increase in commitments is largely in response to the global crisis.