ENERGY: Trees: Out of the Forest and Into the Oven

UXBRIDGE, Canada, Sep 24 2009 (IPS) - Millions of trees, especially from the developing countries of the South, are being shipped to Europe and burned in giant furnaces to meet “green energy” requirements that are supposed to combat climate change. 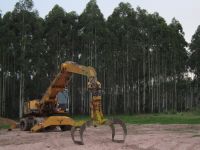 In the last two months alone, energy companies in Britain have announced the construction of at least six new biomass power generation plants to produce 1,200 megawatts of energy, primarily from burning woodchips.

At least another 1,200 megawatts of wood-fired energy plants, including the world’s largest, in Port Talbot, Wales, are already under construction.

Those energy plants will burn 20 to 30 million tonnes of wood annually, nearly all imported from other regions and equivalent to at least one million hectares of forest.

“Europe is going to cook the world’s tropical forests to fight climate change; it’s crazy,” Simone Lovera, of the non-governmental Global Forest Coalition, which has a southern officed in Asunción, Paraguay, told Tierramérica.

Europe has committed to reducing its carbon emissions 20 percent by 2020 in an effort to fight climate change. Biofuels and biomass energy will have key roles in achieving those goals, experts say.

“Biomass is a very promising sector for energy companies,” says Jarret Adams, a spokesperson for Adage, a joint venture between French nuclear power giant Areva and the U.S.-based Duke Energy.

Adage is building a 50-megawatt, wood-burning power plant in the southeastern U.S. state of Florida, the first of 12 such “green energy” plants to be built over the next six years, Adams told Tierramérica.

“Burning wood for energy is considered carbon neutral by U.S. federal and state authorities,” he said. In other words, the process of generating electricity by burning wood emits an equal or lesser amount of carbon dioxide than the quantity absorbed by the trees through photosynthesis.

When Tierramérica questioned the assumption of carbon neutrality, Adams replied, “It is, but who knows for certain?”

Brazil is gearing up to meet the European woodchip demand, not by cutting down forests, but rather by expanding tree plantations by 27 million hectares, mostly of exotic species like eucalyptus, Lovera says, based on a report the Coalition has obtained.

A quick examination of international trading companies reveals a new and growing global industry in wood for energy.

MagForest, a Canadian company operating in the Republic of Congo, will soon ship 500,000 tonnes of wood chips annually to Europe. IBIC Ghana Limited claims it can ship 100,000 tonnes of tropical hardwood and softwood a month from Ghana. Sky Trading, a U.S. company, is offering to supply up to 600,000 tonnes of woodchips for biomass from the United States or Brazil.

Brazil’s International CMO Business Biomass says it is dedicated to reducing coal use and can obtain woodchips from Brazil, Chile, Uruguay and Argentina to supply the European energy market.

Tree plantations have had devastating effects on people and the environment all over South America, Lovera says.

No one seriously argues that these plantations have anything like the biodiversity or ecological function of natural forests, be they first or even second growth. These plantations are “green deserts” because of the amount of water they consume, and because of the lack of native wildlife, according to the environmentalist.

And there are many instances of local people, often poor or indigenous, who are kicked off the land to make way for these huge monocultures, she says.

Because of the mounting evidence about the negative social and environmental impacts, an international coalition of non-governmental organisations has set Sept. 21 as International Day Against Tree Monocultures.

“Burning wood is called carbon-neutral, but it’s not,” said Rachel Smolker, a research scientist who works with the Global Justice Ecology Project in the United States, told Tierramérica.

According to Smolker, research by the Massachusetts Environmental Energy Alliance, a U.S. environmental group, indicates that burning trees for energy produces 1.5 times as much carbon as coal and three to four times more than natural gas.

Chopping up a tree, shipping it hundreds or thousands of kilometres to burn it and then planting a tiny sapling to replace it is not carbon neutral, said Scott Quaranda in an interview. He is part of the Dogwood Alliance, a coalition of citizen groups in the southern United States trying to prevent their remaining forests from being turned into tree plantations.

U.S. government policy has sparked proposals for some 102 biomass or biofuel energy facilities in the region, he said.

A single power plant could require millions of tonnes of biomass, mostly woodchips produced on fast-growing loblolly pine (Pinus taeda) plantations, which already blanket the southeastern states from the Carolinas to Arkansas.

Those trees were planted over the last two decades to feed the pulp and paper industry. Nearly all plantations have been developed at the expense of natural forest, which has numerous consequences: herbicide and fertiliser runoff pollutes water sources, sediment and plant waste for logging operations clog streams, soils are degraded, and habitat for other species is lost.

One in five hectares in this huge region is now a green desert, and it will only expand, Quaranda fears.

“We’re on track to destroy all of the remaining forest and grassland ecosystems by converting them into bioenergy,” said Smolker, citing the study “Implications of Limiting CO2 Concentrations on Land Use and Energy”, published in the May 29 issue of the journal Science.

The study maintains that with carbon taxes on fossil fuels making them more expensive, treating biomass energy as carbon neutral would drive the conversion of all of the planet’s remaining grasslands and forests into bioenergy by 2065, she said.