ENVIRONMENT: For Trees, Against Monoculture 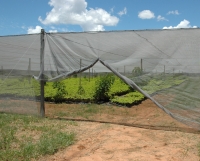 Critics say the solution lies not in planting trees but in recycling and cutting back on a highly wasteful consumer lifestyle. Credit: Servaas van den Bosch/IPS

Large-scale tree planting on agricultural land can save those primary forests, agroforestry experts argue. But the new plantations are detrimental to biodiversity and indigenous people, critics respond.

Professor P K Nair, director of the Centre of Subtropical Agroforestry at the University of Florida, believes planting trees on farmland is the way to conserve what's left of the world's rainforests. "What is lost now is lost forever. It's an illusion to think you can recreate a rainforest that took thousands of years to develop," he says.

Nair and his colleagues at the Second World Agroforestry Congress held in Nairobi in August argue that an added advantage of tree-farming is that it constitutes a significant potential carbon sink.

For African countries – heavily burdened by deforestation and struggling with adaptation to climate change – this could strengthen their demand for the inclusion of agroforestry in a deal on reduction of emissions from deforestation and degradation (REDD) in Copenhagen later this year.

But others say the argument that plantations can take pressure off rainforests is weak.

"The plantations that we see popping up mostly cater for the production of fast wood products," says Wally Menne of South African Timber Watch, a coalition of 15 NGOs united by worries over the negative impacts of industrial tree plantations.

"This wood is used for paper, cardboard or toilet tissue, disposable items that wind up as waste. The solution is not in planting trees but in recycling and cutting back on a highly wasteful consumer lifestyle."

Timber Watch is affiliated with the World Rainforest Movement (WRM) that organises the annual International Day against Tree Monocultures on Sep. 21.

The WRM states: "Throughout the world, millions of hectares of productive land are rapidly being converted into green deserts presented under the guise of 'forests'. Local communities are displaced to give way to endless rows of identical trees – eucalyptus, pine, oil palm, rubber, jatropha and other species – that displace most other forms of life from the area.

Farmland, which is crucial for the food sovereignty of local communities, is converted to monoculture tree plantations producing raw materials for export. Water resources become depleted and polluted by the plantations while soils become degraded."

According to Menne, many plantations replace grasslands that function as catchment areas during the rains. "In countries like South Africa, Kenya, Mozambique, Tanzania or Uganda this grassland releases water during the dry season, allowing for the perennial flow of rivers.

"Trees use much more water than traditional agriculture, forcing communities downstream to invest in expensive boreholes or dams."

Menne also foresees problems in trying to transition from farmland to plantations: "They require a lot of labour in the initial stage but in the next 10 to 30 years there’s very little to be done while the trees grow. This results in rural-urban migration and unemployment.

"And there is loss of biodiversity as animals and plants are driven out, making people turn to protected areas to harvest their natural resources."

Jay Samek, researcher with the Global Observatory for Ecosystem Services of Michigan State University and involved with the institute’s Carbon2Markets initiative, suggests that the market could reward afforestation projects that preserved biodiversity with a better price on carbon credits than monoculture plantations.

"We have been sold to mono-cultures," warned Nobel Prize Laureate Wangari Maathai at the U.N. in Nairobi.

"Monoculture plantations look like dead forests; you don't see butterflies, or birds, or animals. But life is diverse."