NIGERIA: Investment in Primary Education Must Include Teachers

BADAGRY, Nigeria, Sep 11 2009 (IPS) - Nigeria has over the past 10 years recorded high enrolment and completion rates in primary school education. 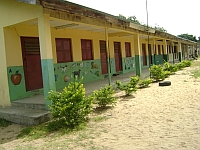 These impressive enrolment figures were achieved largely due to the federal government introducing a policy of Universal Basic Education (UBE) in 1999, to coordinate compulsory free basic education for all in primary and junior secondary school.

With funding from the federal and state governments, UBE boards repaired built new classrooms and repaired others, provided books and instructional materials to schools. They also began training and retraining teachers, and mobilised communities and parents.

Similar projects were carried out through UBE boards in all 36 states, and local government education authorities started awareness campaigns to get children of school age to school.  In Lagos State, for example, the government raised awareness through officials of the State Universal Basic Education Board (SUBEB), using megaphones mounted on vehicles to campaign for enrolment, especially in public schools.

There were also SUBEB jingles on radio and television, asking parents to bring their children or wards to public primary schools for registration.  The situation in the areas under the authority of Badagry Local Government, not far from Nigeria's largest city, Lagos, which had low enrolment, improved rapidly.

The numbers have risen quickly. Before the exercise, some schools had fewer than 500 pupils.

"Last academic session most schools recorded more than 1,000 pupils. We got to a level where we had to split the schools into two," says Onilude Olusegun, secretary of the Badagry Local Government Education Authority.   Gbenepo Primary School, Ajara, (population 3,000) was split in two. L.A. Ajara Primary School, with about 2,000, and the public school Igorosun, with about 1,500, were also split.

The local authority reveals there are now more than 27,550 pupils (13,855 boys and 13,695 girls) in the three Local Council Development Areas (LCDA) covered by the Badagry Education Authority.   Olusegun told IPS that if enrolment continued to rise in the next academic session (ending September) more schools would be divided to decongest classrooms.

The chairmen of the three LCDAs, with Olorunda LCDA chair Amina Abudu especially active, have directed resources to schools, providing free exercise books, free text books in core subjects, and free uniforms; delivering new desks and benches and renovating classrooms. In Badagry LCDA, all schools were provided with boreholes for and generators to power water pumps.

Apart from the SUBEB campaigns, Badagry Local Government has another good reason for the increased enrolment. IPS learnt that many people are moving from metropolitan Lagos to rural areas, and Badagry is now a haven for such settlers.

"People are coming down to Badagry from Lagos to build houses, so we have quite an increase in the number of pupils. Free education has been there for long, but because of free text books and exercise books, many parents are withdrawing their children from private to public schools to enjoy the dividend of democracy," said Olusegun.

"I do not think any child has cause not to read and write in this area."

But it is not all a bed of roses for education in the area, as the increase in enrolment has put pressure on infrastructure and the limited number of teachers.

"Though there are more teachers, the teacher-to-pupil ratio is still too high. We need more teachers. We still have some schools – especially in the riverine areas – begging for buildings, furniture and teachers," he said.

There are 757 teachers under the Badagry Local Government Education Authority, roughly matching the national average of one teacher for every 37 students, but far better than other parts of the country. Complaints over pay and working conditions are frequent nationwide. Olusegun is worried that Nigeria's chance of attaining the Millennium Development Goals target of free primary education for all by 2015, is threatened because the teachers and lecturers in all levels of education are constantly on strike.

"I do not know how it will be achieved. We all see the problems in the education sector in the country. In some states, primary schools have been shut for more than one year.

"The Nigerian Union of Teachers (NUT) is warming up for another strike in some states, over non-implementation of a new salary structure. The higher institutions are on strike. I am afraid we won't be there in 2015."