JUBA, South Sudan, Sep 12 2009 (IPS) - In April 2010, the people of South Sudan will vote in a milestone general election, and for the first time, South Sudanese women will be able to participate. 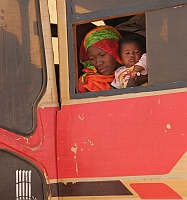 There are myriad obstacles to overcome before women like this returnee in Southern Kordofan state can exercise their right to vote. Credit: John Nyaga/IRIN

Since the signing of the Comprehensive Peace Agreement (CPA) in 2005, which ended the 21 years of civil war in the south, elaborate and ambitious plans have been made for elections, which the people will excitedly take part in next year.

Before Sudan went to war in 1983, women were not allowed to vie for political office or to vote. Next April, they will be asked to cast their ballots in a contest in which 25 per cent of seats have been reserved for women.

The excitement is also tempered, however, by concerns over the major obstacles women face in exercising their democratic rights.

Illiteracy presents one of the biggest obstacles to womens’ empowerment. Most women in South Sudan have never had any formal education and are unable to read and write.

“Although women form the majority of the population, most are not educated and as a result, it is possible most people will vote for the wrong parties,” says Michael Huda Daudi Laila, minister of health in Central Equatorial State.

The problem is compounded by the complexity of the poll. Voters will be expected to cast 12 different ballots, which may prove to be overwhelming.

Lucie Luguga, United Nations Development Fund for Women (UNIFEM) programme manager in South Sudan, fears the number of votes each individual will be required to cast will mean voting can]t be finished in the one day set aside for the election.

Twenty-five percent of seats at local, state and national level have been reserved for women, but analysts say there are problems with the formula.

To begin with, only women who are nominated by parties will qualify to participate in the election. This will require them to have bargaining power, in order to negotiate with their political parties, says Rabab Baldo, a Khartoum-based UNIFEM programme specialist.

With no clear criteria for selection to the women's list, female politicians' relative weakness within established parties, and the fact that many women probably don’t have the money to register their candidacy, the fear is that the women who end up filling the 25 percent of reserved seats will represent the interests of male power brokers who put them on the list rather than them being a strong voice for women’s interests.

Tereza John, a member of the Legislative Assembly in Western Bar El Ghazel State is among the women calling for political parties to set aside a specific budget to support women candidates for nomination as well as during the campaigns and mobilisation activities.


To demonstrate how long casting ballots could take, UNIFEM South Sudan office carried out a mock voting process with women in one village, and found that it took close to 45 minutes for each woman to cast all 12 ballot papers. The women were also angry over the amount of time they were spending in the exercise.

“Some women even walked away before the exercise was over,” says Luguga. “We could not finish voting for even five people within one day. The women were annoyed with us because they thought that we were wasting their time and that we invented our own voting process.”

UNIFEM’s findings are supported by the International Institute for Democracy and Electoral Assistance (IDEA) in Khartoum, which has carried out its own research on the viability of the electoral process.

IDEA programme officer Cecilia Poni Joshua says an educated person will need 36 minutes to vote and an illiterate person could take twice as long because they would require assistance.

Jersa Kide Barsaba, a member of the Southern Sudan High Elections Committee, says that for the process to be successful, intense civic education must be carried out. “This electoral process is going to be the most complicated ever and needs comprehensive voter education,” she says.

The vastness of South Sudan, and its poor transport and communication infrastructure, is expected to exacerbate the situation, though Barsaba says election officials plan to put up as many voting centres as possible. “We have bought and hired vehicles that will transport voters who are far from voting centres, with the help of chiefs.”

Despite widespread scepticism over feasibility and the barriers people face, the Election Commission is confident that the elections will be accomplished in one day. Barsaba points out, however, if this proves impossible, the Commission is empowered to extend the polling period.

Election day aside, voter registration presents another challenge. Voter registration began in August and is scheduled to end on Nov. 30, but according to observers, this is not sufficient time.

Many people, particularly in rural areas where the majority are women, do not have identification cards required for registering as a voter. Political parties are concerned that this might lead to bribery and rigging ahead of the election.

Fears that officials may intimidate voters before issuing IDs were raised by Rabab Baldo, a Khartoum-based UNIFEM programme specialist working on gender equality and good governance, at a conference organised by UNIFEM and United Nations Development Fund, Joint Donor Team, the International Republican Institute (IRI) and USAID in July.

Baldo explained that the administration issuing cards may manipulate women into voting for certain candidates, adding that many women were not aware of their rights, as they had never voted before.

“Women may get told to vote for a particular candidate as a condition of getting an ID,” he said.

Confounding matters further is the fact that to be registered as a voter in a particular constituency, must prove that he or she has lived there for between three to four months.

The UNIFEM conference, geared to empowering women to deal with all these issues and increase their bargaining power with government and other political players, was seen as the first step in women gaining a clear understanding of their party policies and what they can do to make sure they get their political party’s support.

Women are confused about the conditions of nomination and representation, for instance, and Baldo says the high candidacy fees is another obstacle to women running for office. To contest the presidency, a candidate must pay 10,000 Sudanese pounds – 5,000 U.S. dollars – money few women would be able to raise.

The fee to represent a local constituency or become a member of national parliament is 100 Sudanese pounds ($50) which is paid to the National Elections Commission. “There is need for a joint fund to support all women candidates, including the independent candidates who will not be coming in through any party,” Baldo says.

Election Commissioner Barsaba agrees that the fees for presidential, vice presidential and governorship are high, but says the fees for other seats are affordable and if the women feel they cannot raise the money, they should approach donor agencies through their political parties.

Women candidates are also worried about their security, despite Section 65 of the Elections Act requiring police officers to accord equal security to all candidates and political parties.

The war may be over, but many people are still armed. Women candidates fear they could be attacked during campaigns or if they show interest in vying for constituency seats. In many parts of the country, people are loyal only to the Sudan People’s Liberation Movement (SPLM), and may intimidate candidates from other parties.

Lords Resistance Army Rebels of northern Uganda have infiltrated south Sudan region, and women fear they might be used to attack candidates and voters alike.

But as the clock ticks to April 2010, women in South Sudan move on hoping that these issues will be tackled so they can raise their political profile to another level.