KINSHASA, Sep 9 2009 (IPS) - Condemning Zimbabwe’s withdrawal from a regional tribunal which ruled its state-orchestrated land seizures illegal, civil society groups have said the country should abide by decisions of the Southern African Development Community (SADC) or pull out of the regional body entirely. 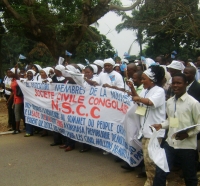 A SADC heads of state meeting in the Democratic Republic of Congo referred a SADC Tribunal’s ruling in favour of farmers whose land had been seized to a special summit planned for Maputo in two weeks time, a parallel summit of groups belonging to the Southern African People’s Solidarity Network (SAPSN) called for firm action.

"The SADC Tribunal is now an integral part of the SADC Treaty. Any attempt to pull out of the Tribunal by the government of Zimbabwe would amount to pulling out of SADC as a whole," the civil groups said in a statement.   Zimbabwe announced on Sep. 2 that it would no longer be bound by decisions of the Namibia-based regional court, claiming that the treaty which led to its formation is yet to be ratified by at least two thirds of the member countries.

The civic groups said an amendment to the SADC Treaty establishing the Tribunal in 2001 made the tribunal an integral part of SADC. The SAPSN and the watchdog Zimbabwe Lawyers for Human Rights both point out that the tribunal protocol categorically excluded it from the usual requirement for ratification by two thirds before it could come into force and effect.

Several white farmers and a black commercial farmer approached the tribunal opposing the haphazard land reform programme launched by the Harare government in 2000.

The programme saw about 4,000 white farmers losing their land to blacks when the Zimbabwean government embarked on a controversial and often violent programme to grab land from white commercial farmers. This was under the pretext that it was correcting a colonial imbalance which left vast tracts of arable land in the hands of a few white farmers and relegated blacks to useless reserve areas.

Land redistribution, which Mugabe says is necessary to correct an "unjust and immoral" colonial land ownership system, is blamed for plunging Zimbabwe into food shortages after Harare failed to support black villagers resettled on former white farms with support necessary to maintain production.

The tribunal ruled in favour of the farmers in November 2008 , finding the Zimbabwe government in violation of a SADC treaty which protects regional citizens against discrimination on the basis of race. The regional court ordered Harare not to evict the 78 farmers who brought the case, as well as well as pay full compensation to those already forced off their farms.

Mugabe publicly dismissed the ruling, while his followers in the military and his Zimbabwe African National Union-Patriotic Front party defied the court order by continuing to seize more land from the few white farmers remaining in Zimbabwe.

While the Harare government has compensated some farmers for developments on the land such as dams, roads and buildings and says it is committed to compensating all farmers for such improvements, Mugabe has refused to pay for land seized, saying it was stolen from blacks in the first place.

SAPSN is urging SADC leaders to reject the precedent set by Zimbabwe's withdrawal from the Windhoek-based Tribunal.

"SADC should make sure that Zimbabwe institute human rights reforms and comply with regional agreements and carry out the commitments made under those agreements," said Tabani Moyo of the regional media lobby group Media Institute of Southern Africa (MISA).

Ignatius Banda reports from Bulawayo that SADC's call for the lifting of sanctions on prominent members of ZANU-PF has been greeted with dismay in Zimbabwe.