AFRICA: Lost in the Tracking of Budgets

BLANTYRE, Oct 26 2009 (IPS) - As Susan Muonanji and other vendors scrambled around one of the many transport busses to sell cabbages and tomatoes at a market along one of Malawi’s key roads, a national budget session had just started in parliament some 100 kilometres away in the capital city, Lilongwe. 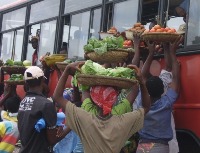 Vendors at the Lizulu market say they do not know how government spends its money but they know it certainly will not reach them. Credit: Charles Mpaka/IPS

This year, like in the past five years, the minister of finance, Ken Kandodo talked about the need for Malawian farmers to be processing their produce for better value for money.

This, Kandodo said, is in line with the Millennium Development Goal to eradicate extreme poverty by 2015. Value adding is a key component in improving lives of Malawians, 80 percent of whom earn a living through small scale farming, he explained.

It is why government packaged a loan facility in the budget for farmers, especially rural women, to access capital to invest in food processing, said the minister in his July budget presentation.

Heard it all before

Now, it is not the first time that Muonanji, an active member of the village development committee and secretary of a local HIV/AIDS club, has heard about such "good statements" during the national budget sessions.

But she does not think that her business depends on it to grow.

"I have heard about budgets before, the good things that they say but I don’t care because I don’t know where those good things go. It does not make a difference," she told as she rushed to join the vendors swarming around another bus.

Every year, before national budget presentations, the ministry of finance goes around the country seeking contributions from various players which include private businesses, churches and economic and human rights organisations on what they would like to see in their budget.

"Where do the consultations happen? Not at a place like this one. Ask these people (fellow vendors) and they will tell you they have never participated in such a discussion," she said.

She may not be at the consultation sessions but democracy ensures that she is represented by some civil society organisations (CSOs) during the consultations and by her member of parliament during discussion of the budget in the national assembly.

Such organisations have been compiling their own manifesto to try to press upon the government what the public would need to have in terms of education, water services, health and agriculture. They have also had their suggestions about what the national budget should contain in line with expectations of ordinary people they represent.

However, once they have made the pre-budget inputs, the organisations do not have control even on their own suggestions because they do not participate in the key discussion of the budget in parliament, said economic analyst Mavuto Bamusi.

"We do make contributions about what the people of Malawi want to have in the budget. But we are often not part of the process of discussing the contributions in parliament during budget sessions which is a key stage in budget development," he said.

Bamusi appreciates that in a democracy, by law members of parliament should be the ones to discuss the budget bill and make it into law in parliament. But he wishes the representatives were able to push through to have people’s requests reflected in the final budget product.

Bamusi, who is also national coordinator of the Human Rights Consultative Committee (HRCC), a grouping of over 50 human rights organisations in Malawi, says if anything it is the desire of civil society organisations to be part of the process of scrutinising allocations to different sectors to see whether the allocations are in line with the demands of citizens.

"We do submit our reports to a parliamentary committee on budget and financing. But often they have been sources of little change to the debate over national budget discussion in parliament. I would say that windows are not open wide enough for us to be recognised at that point yet," he said.

The deputy minister of finance, Fraser Nihorya, said it was not possible for civil society to participate in budget discussion in parliament because that was the duty of the legislators.

But he said the national budget tries to be as representative as possible through welcoming contributions from individuals and groups not only during pre-budget consultations but at anytime throughout the year.

"What we present during budget session is an aggregate of views from various players. We analyse the views, working together with multi-sectoral partners such as the IMF and World Bank.

"But remember that in the end, we have to take a position as government in accordance with the agenda for development and the resources available," he said.

Asked whether citizens, through civil society organisations, are allowed to monitor how the money that reaches the Debt and Aid department in the finance ministry is factored into the national budget, Nihorya said the ministry is a public place and therefore accountable to its citizens.

"The ministry is open to share information. We appreciate the views that we get because we think the checks and balances that we are provided with are to the advantage of the office and of the nation as well. But it should be expected that we cannot divulge all the information," he said

There are a few sessions that are held on information sharing between government departments and other outside players in a year. But not all information that civil society would desire to have is given, such as on how the five state houses spend the money allocated to them.

An official at the HRCC who did not want to be named blamed civil society for their inability to be able to monitor the Debt and Aid department and the general operations around the budget.

"Civil society is also supposed to monitor that donors are keeping to the Paris Declaration on donor commitment and conditions and aid effectiveness. They are also supposed to make a local revenue audit. But there is not much that is happening in this regard. We often confine ourselves to consultations or to petitioning parliament when the budget is not being passed quickly," the source said.

Bamusi admitted there were lapses on the part of civil society in Malawi when tackling the budget development and implementation. He attributed it to lack of capacity in many organisations.

"Issues of budget are complex matters and we are limited on capacity to provide thorough tracking," said Bamusi.

He added that there was need for CSOs in Malawi to broaden their scope of budget monitoring to include issues of water, funding to governance institutions and operations of local assemblies instead of concentrating on key sectors such as health, education and agriculture.

But he squarely blamed it on government as well for not been forthcoming on some matters.

"We often ask tough questions and that often puts us on a collision course with government. Angry with us, some officials have told us that we do not understand the psychology of government. In other cases, they tell us that they cannot give us information for fear of compromising state security and we think that is a blanket excuse," he said.

He acknowledged however that recently government has been responding silently to some of the concerns from the CSOs. It has strengthened the offices of the auditor general and of public procurement which, according to Bamusi, should lead to prudent use of public finances.

In his budget presentation last July, the minister of finance said government was developing a five-year programme of public finance and economic management reform.

The programme was expected to, among other things, improve domestic and donor resource management, promote effective and efficient procurement and improve financial reporting and quality and timeliness of auditing processes.

While government is making such promises, ordinary people are waiting for the results to trickle down to them.

Muonanji said she did not believe in promises from politicians. Told that she could benefit from the youth loan facility or the Malawi Rural Development Fund (MARDEF) that has helped other women, Muonanji was not convinced.

"I have heard about MARDEF before on radios. But I would like to know who from this area is benefiting? All these women here have been selling tomatoes in small baskets for a long time and they too want to grow.

"And when that money comes here at all, we know that it is not going to get down to us," she said at Lizulu market in the Central region of Malawi.