KANO, Oct 8 2009 (IPS) - Cowpeas are of vital importance to the diets and livelihood of millions of people in West and Central Africa. But the crop is notoriously difficult to store – beetles and other pests can destroy an entire granary full of cowpeas within 12 months. 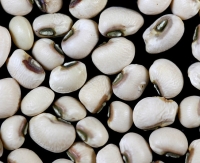 In September, ten people died - twenty more were hospitalised - after eating beans contaminated by farmers in an attempt to protect them from pests in storage. Credit: Wikicommons

Rural families in Nigeria grow cowpeas for sale, for their own consumption and feed animals on the husk of the bean.

The black-eyed beans are known to contribute to soil fertility by providing ground cover and useful plant residues, fixing nitrogen, and suppressing weeds.

Cowpeas are an important staple food in northern Nigeria and beyond. Across the country the beans are made into a deep-fried dumpling (known in Hausa as kosai’, in Yoruba as akara). Another favourite is a pudding known as alala.

Cowpeas provide an inexpensive source of protein for both rural poor and urban consumers. Research by Ricardo Bressani in 1985 revealed that the grain contains about 25 percent protein and 64 percent carbohydrate and so it has a tremendous potential to contribute to the alleviation of malnutrition among resource-poor farmers.

A superb plant then.

Except that about twenty people were hospitalised and another ten died in just the month of September in just the northern Nigerian state of Kano, after eating beans contaminated by farmers in an attempt to protect them from pests in storage.

“We have a lot of cases of food poisoning due to chemical storage, leading to what is commonly called ‘killer beans’. Because many farmers don’t have functional storage facilities and do not receive the full value of their cowpea harvest,” said Dr Tahirou Abdoulaye, a representative of the International Institute for Tropical Agriculture. The IITA has developed a new, safe method of storage.


It’s so difficult to protect cowpeas from beetles and other pests, that farmers typically sell their harvest as early as possible to offload the risk; but this means they get a low price as they sell at harvest time, when the market is flooded.

Ahmed Abubakar, a farmer at Gabasawa village about 130 kilometres from the city of Kano who has been growing cowpeas for years told IPS that he has been storing his beans using insecticides which he admitted were poisonous when misused.

He said officials from the Kano State Agriculture and Rural Development Agency had on many occasions informed him and other farmers in the area that the pesticides and insectides were harmful if used for food storage, but there was no alternative method to store the product.

He said that he sometimes stored the harvest in plastic bags, but that this failed to protect it.

The Institute of International Tropical Agriculture (IITA), has recently developed a new technology for storing cowpeas without chemicals.

Over the last two decades, the IITA has made significant advances in improving the productivity of cowpea in sub-Saharan Africa, developing a number of varieties with different maturity periods, ability to outcompete weeds, increased resistance to diseases and pests and other desirable agronomic traits.

But storage is a problem that threatens to erase any gains in productivity. Abubakar revealed that every year, he loses more than 1,000 kilos of his crop, which he usually seals off in the 50 kilogramme capacity bags.

Dr Abdoulaye says his institute will be rolling out a new method, known as the Purdue Improved Cowpea Storage (PICS), in Nigeria during the final quarter of 2009. The aim is to see at least half of all cowpeas stored using the new method across West and Central Africa by 2011.

PICS is a straightforward idea: seal the bags up in hermetically-sealed plastic that does not allow air in, limiting the survival of insects that damage cowpeas.

“This simply eliminates the need to use any chemicals for storage,” says Abdoulaye. Each PICS bag, which will be available from licensed vendors, consists of two high-density polyethylene plastic bags, and an outer sack of nylon that protects them.

Abdoulaye explains that any insects sealed in with the beans will quickly use up all the air in the sealed bag and then it can be stored safely for eight to 12 months without being damaged by insects.

Training on the use of the new technology will focus on women farmers, and a special demonstration would be conducted in villages just for the benefit of the women farmers, who take the lead in the most crucial phases of processing and preparing cowpeas, as well as storage.

It is expected that about 40 women technicians trained by the Institute will continue to work with women farmers across the 12 northern states of Nigeria to increase female farmers’ access to the technology.

The IITA official therefore revealed that the PICS project and its partners have identified with the efforts of National Agency for Food and Drug Administration and Control toward helping Nigerian consumers in getting safe cowpeas to eat.

Abdoulaye finally disclosed that to protect the users from getting the fake product, the institute only gave one accredited vendor the technology for production and sale, advising that farmers must obtain from the vendors to be sure of getting authentic and effective bags.