CAMEROON: ‘Our Lives Are Defined By This Forest’

YAOUNDE, Oct 4 2009 (IPS) - Pauline Siembe, a Baka pygmy in South East Cameroon, comes out of her smoky hut licking her fingers after a meal of pounded yam and bush meat soup. 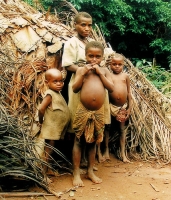 Baka family: 'We have been living here since time immemorial, and the forest has not disappeared. Those who now claim they are conserving the forest are the same people pillaging our forests.' Credit: Ngala Killian Chimtom/IPS

“It always feels good eating a meal like this,” she remarks as she straps a basket on her shoulder and heads for the forest.

Her husband, Daniel Njanga, wipes his mouth with the back of his hand, the same exhilaration visible as he emerges from the dwelling.

Still savouring the meal, Njanga says as I stretch out my hand to greet him: “This is what the government wants to deprive us of.”

Taking on a more serious look, Njanga spits disdain for the government’s methods of conserving the vast forest reserves of South East Cameroon, that straddle two of the country’s “divisions”, the Boumba and Ngoko and the Upper Nyong divisions, all in Cameroon’s East Region, being part of the Congo Basin rain forest.

“This is our home and there is no point telling us that we should not access it,” he tells IPS.

“If we are talking about conservation, then the Bakas are the best conservationists. We have been living here since time immemorial, and the forest has not disappeared. Those who now claim they are conserving the forest are the same people pillaging our forests. We see sawmills felling large portions of our forest every day. Is it not this same government that authorises the felling?” he asks.

Njanga is obviously angry that the forest has been gazetted into three national parks and 23 logging concessions, totalling some 760,000 hectares.

While logging concessions are designed to foster sustainable timber exploitation – in fact, operators are supposed to plant 10 trees for every one felled, although the provision is frequently violated – national parks create even stricter restrictions, as access is forbidden. These restrictions pose a threat to the Bakas, who now have to grapple with new challenges.

By the forestry laws of 1994, National Parks fall under the sphere of permanent forest domain. The law explicitly states: “Public access to state forests may be regulated or forbidden.”

The more than 30,000 Baka pygmies who live in the region see these restrictions as an affront to their right of access to the forest they consider their natural home.

”Our lives are defined by this forest. We harvest fruits, wild tubers, honey and medicine from the forest. And we kill animals for our basic food needs. We destroy nothing. We get only what we need from the forest,” Siembe told IPS.

Gilbert Ngwampiel, a Baka man in Ngoyla, near the Nki National Park, says: “If government says we should not hunt animals, it is a way of exterminating the Bakas. Eating bush meat makes Baka men fertile. Failing to eat meat means that the Baka man will not be able to impregnate his wife, and this is dangerous.

“Of course we want these animals to continue living here,” Ngwampiel says when asked whether the Baka hunting techniques would not perhaps lead to the extinction of some species.

“We kill only enough animals to eat, and we don’t kill all animals. We hunt only male animals, the females and the babes are left for posterity. Those who kill animals indiscriminately are those who want to go and sell, and they are not the Bakas – they are the Bantu,” he told IPS.

He points out that the Bakas have their shrines and places of worship in the forest, and denying access to the forest is a clear violation of their right to freedom of worship.

“We can never stop worshipping the Jengi (the Baka spirit of the forest).The Jengi is the originator of all life. For life to continue, we must offer a yearly sacrifice of an elephant to Him. So, I can’t understand how government tells us not to kill an elephant. How do we then survive?” he muses.

What the Bakas don’t say is that they have to cut down trees to harvest honey, no matter the value and species of the tree, and their Jengi sacrifice is a threat to the dwindling numbers of elephants in the region.

Besides, the Bantu, according to Boumba and Ngoko divisional delegate for Forestry and Wildlife Pandong Eithel, supply the Bakas with guns and ammunition to hunt animals on a large scale, and later collect what has been brought in. “The rewards given to the Bakas are generally exploitative,” he says.

Still, the concerns have pricked the conscience of the Cameroon government and its conservation partners, notably the World Wildlife Fund (WWF). The two entities have already completed a study that recommends a shift in conservation paradigms.

“The intention is to put people at the centre of the conservation agenda. To find solutions that work for people,” says Leonard Usongo, former WWF coordinator for the WWF-Jengi Conservation Project of South East Cameroon, and who supervised the study.

Olivier Tegomo, junior research assistant for WWF who was at the forefront of the study, said he worked closely with the Bakas to find out what the forest really represented for them.

“All this has to do with the notion of participatory forest management. We had to find out the types of products they get from the forest, where these products are concentrated, and how they could exploit those products without threatening the forest ecosystem. Along with the Bakas, we have come up with a participatory map that localises all their interests in the forest.”

Conservators did sometimes poorly apply the 1994 forestry and wildlife laws, which “stipulate scrupulous respect for the rights of indigenous people to forest resources,” Eithel conceded to IPS.

“This participatory management approach will no doubt lead to a better application of that law, and help ensure respect for the Baka way of life, and their belief systems,” he said.

Usongo says any conservation paradigm that does not take into consideration the socio-cultural needs of the people is built on the wrong premise.

“The solution that works is that which still allows the indigenous people access to forest products, although we have to encourage them to do so sustainably.”

He says the WWF cannot stop the Bakas from sacrificing to Jengi, but adds “We are encouraging them to use less threatened species, instead of killing an elephant every year. He also says along with the administration, the WWF is encouraging the setting up of community farms for the Bakas to lure them away from resorting to the forest for all their food needs.

“We are also working to introduce them to pisciculture as a way of slowing down their continual dependence on bush meat for protein,” he told IPS.

“It means restoring the Jengi – the spirit of the forest. It means balancing today’s needs with tomorrow’s demands,” Usongo concludes.

But the government will still need to grapple with non-Baka people who border Cameroon’s forest expanse, and who use most unorthodox and destructive methods of farming. Many use bush fires to clear the forest for farmland.