BANGKOK, Oct 8 2009 (IPS) - Who knows how many more fossils and species are lurking in the vast, unexplored riches of South-east Asia? 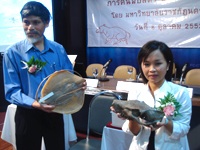 A fossil of a mammal dating back six to eight million years and a new living species of stingray have been discovered in northeastern and southern Thailand, respectively.

Both discoveries were presented Thursday by the Nakhon Ratchasima Rajabhat University’s Institute for Petrified Wood and Mineral Resources in the Thai capital.

Barely two weeks ago, the World Wide Fund For Nature (WWF) announced to the public that 163 new species were discovered over the past year in the Mekong River region, as stated in its report, ‘Close Encounters’.

The fossil mammal – which resembles both a pig and a hippopotamus – was discovered in 2001 by Dr Rattanaphorn Hanta in the Thachan subdistrict of Nakhon Ratchasima province in the northeastern part of the South-east nation. It was named ‘Merycopotamus thachangensis’ after its locality.

A research team member found the fossil at the bottom of a pit nearly 25 metres below the surface, said Dr Hanta, a researcher and curator at the Institute.

The fossil was recognised by its elongated flat skull and its nostrils and eyes that were located on the same anatomical plane — known characteristics of the ‘Merycopotamus’ genus. "[It is] very similar to a hippopotamus, indicating that it lived like a hippo, sometimes living in water and sometimes walking on land and eating grass," said Dr Hanta.

Its unique tooth structure also indicated that it was distinct from the three previously known species from the Merycopotamus genus, namely, the ‘Merycopotamus dissimilis’, ‘Merycopotamus medioximus,’, and ‘Merycopotamus nanus’, which were discovered in 1868, 1977, and 2004, respectively, in Burma, India, and Pakistan.

"In more primitive species, their tooth ridges are thick and continuous, and in younger ones their ridges are totally separate… [in the newly discovered fossil] the ridges still remain, so we’re guessing it might have evolved [from them]," she added.

The mammal is estimated to be 0.8 metres in height, had short legs and inhabited rivers covered by forests or swamps with adjacent grasslands.

For Dr Chavalit Vidthayanon and Pairoj Sirimontaporn, senior fishery biologist at the National Institute of Coastal Aquaculture in Songkhla, Thailand, 10 years of searching for a stingray species that they feared had been decimated did not prove futile.

They discovered the new living species off the freshwater zone of inner Lake Songkhla in southern Thailand. The two scientists said the stingray, including its wings, spans 1.3 metres in length and weighs 50 to 60 kilograms.

"I’ve been looking for this stingray for almost 10 years," said Dr Vidthayanon, who is the vice director at the Institute, which has been conducting palaeontology and biodiversity research in the region for nearly a decade.

The stingray has been fished and consumed by local communities for a long time, but has only recently been classified in science, he added.

Landing reports showed that between 1987 and 1995, around 200 to 300 of the newly discovered stingray species were caught annually. However recently, only 10 or so were caught, raising fears that the stingray was potentially endangered.

Yet another group of new species inhabiting the Mekong River, the discovery of which is also credited to Dr Vidthayanon, is awaiting public announcement pending review by the scientific community. The three marine species are expected to join the growing list of newly found species in the region.

But while scientists and environmental groups alike hail the discovery of new species, they have also raised alarm bells, calling for decisive steps to arrest the extinction of threatened species.

"Overfishing, changes in water quality, or overfishing, not of the stingray but of several fishes in the lake [affects the stingray]," said Vidthayanon. "Their diet or the food chain may [then] face difficulties, causing the stingray to obtain fewer food, reproducing fewer offspring."

Climate change is considered another factor posing serious harm to rare and endangered species. "Some species will be able to adapt to climate change, many will not, potentially resulting in massive extinctions," states the WWF report, launched on Sep. 25 as part of the conservation group’s Greater Mekong Programme.

In the run-up to the Copenhagen climate change summit scheduled for December, concerned groups such as the WWF have called for bolder targets for reducing greenhouse gas emissions (GhG), which have been blamed for global warming. The December meeting is expected to produce a new treaty that will replace the Kyoto Protocol, which is set to expire in 2012.

"Some of these new species that have just been found might be at risk," said Geoff Blate, climate change coordinator for the WWF Greater Mekong Programme, at the launch of the report.

South-east Asia is known for its rich biodiversity. "Despite occupying a meager three percent of the earth’s total surface, the … region is home to 20 percent of all known species of plants and animals, making it critically important to global environmental sustainability," states the intergovernmental ASEAN (Association of Southeast Asian Nations) Centre for Biodiversity.

Within the region, the Mekong River is considered "the second most biodiverse river in the world," second only to the Amazon River, said Stuart Chapman, director of the WWF Greater Mekong Programme. The river connects Cambodia, Laos, Burma, Thailand, Vietnam and the Yunnan province of China.

"There so many unexplored areas in the Greater Mekong countries, like freshwater forests and marine habitats," said Vidthayanon.