AKARAKUMO, Nigeria, Oct 7 2009 (IPS) - The smell of roasting fish fills the air as one approaches the bungalow a few metres from the shore of the lagoon. Like most families in the village schoolteacher John Sewanu and his family of seven depend on the sea for food and income. 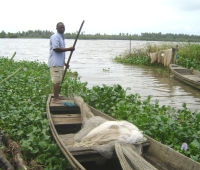 The smell is coming from two structures behind the house, where fish is being smoked in two earthen kilns.

Akarakumo is a small fishing village some 30 minutes drive from the nearest town.

“We do not usually take fresh fish to Badagry for sale except when we catch very big fishes that cannot be consumed at home or sold in the local market.”

Veronica, his wife corroborates his point.

“When we smoke plenty fish and crayfish, we carry ‘am go Badagry market and traders come to buy them. Sometimes we sell plenty,” she said.

Fish is an important dietary component and one of the few sources of animal protein available to many people in Sub-Saharan Africa, accounting for an average of 20 percent of total protein; in coastal areas, fish supplies as much as 80 per cent of animal protein consumed.

Fishing is carried out in Nigeria’s many rivers, creeks and lagoons while trawlers operate along the coast, but the total annual catch supplies only 50 percent of the country’s seafood needs, estimated at 800,000 metric tons, according by the United Nations Food and Agriculture Organization (FAO).

Nigeria imports over $200 million worth of seafood products annually to supplement local production.

Consumption of dried and smoked products is growing, particularly in more remote areas, because they are easy to preserve and consume. Sewanu and other fishermen in the village, with a population of about 2,000, use simple implements and methods.

This fishing community relies on money raised from selling fish to pay for their children’s education and to buy other necessities of life.

Forty-three-year old Sewanu, who also teaches in the village primary school, makes between 10,000 and 20,000 naira ($66 to $132) from a good catch, especially when he can take large fish the 10 kilometres to Badagry in time to sell them fresh.

Even when the catch is small, the family will at least have food for the pot, and can raise the equivalent $5 or $6 from sales in the local market.

But the activities of Sewanu and others has resulted in the depletion of fish stocks, according to one analyst.

“Nigeria’s inland waters can make Nigeria self-sufficient in fish production and fish protein if properly harnessed and managed. But if fishermen keep on taking from the waters without replenishment, there will be shortage,” said Folake Areola, national president of the Fisheries Society of Nigeria (FISON).

Areola told IPS that with judicious restocking and regulation of fishing activities to stop over-fishing, Nigeria could greatly increase its fish production. She added that if the many available indigenous fishes within the country are cultured and possibly processed, it would help the country to meet it fish protein needs.

She said the Nigerian Institute of Marine Research and Oceanography, Lagos, has developed techniques to allow tilapia to be canned like sardines.

She said the Federal Ministry of Agriculture is also doing a lot through various fish farming projects and production of fingerlings to support increased local fish production.

Areola is however worried about the activities of international fishing trawlers which operate in the country’s territorial waters. She saidno one had has done any analysis on the quantity of the marine resources being taken.

At a meeting in Lagos early this year, the Nigerian navy said it had acquired vessels to fight piracy in the nation’s territorial waters including checking the activities of foreign fishing vessels that illegally fish in her waters.

But local fishermen argue that if government wants to ensure the availability of fish protein and strengthen fishing communities like Akarakumo, the problems of high cost of fishing nets and materials must be addressed.

“The first problem is that we have to go far into the bush to cut logs which we usually pile into the water bed in a rectangular or triangular shape on which we tie the nets to prevent them from being swept away by the current,” Sewanu said.

He called for a research into how to make iron poles to replace the logs to reduce the cost and number of time the fisherman has to go looking for new poles.

He also called on the government to lower the tariff on nets and make them easily affordable for fishermen to enable them produce more fish locally to ensure food security for the nation.

The other problem, he said, is the cost of nets.

“We have to travel to Lagos to buy nets. The net sold in Badagry is from Cameroon and it is sold by only one man. Though they are good, they do not last because the tread used is fragile. The ones we buy in Lagos are better quality and last longer.”