CONCEPCIÓN, Chile, Nov 16 2009 (IPS) - “If the government says let’s sit down and try to reach a solution, we’ll be there,” Héctor Llaitul, a leader of the radical Mapuche organisation Coordinadora Arauco Malleco (CAM), who is in prison in the southern Chilean region of Bío-Bío, told a group of foreign correspondents. 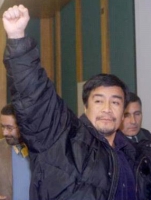 If a negotiating table is set up to resolve the long-running conflict between the Mapuche – Chile’s main indigenous group – and the state, the native leaders would demand land and autonomy, said Llaitul, the CAM’s so-called “military leader.”

But not until there was bloodshed again in the conflict did a government minister visit the area, he lamented, referring to the death of 24-year-old Jaime Mendoza Collío, an activist who was shot by the police in August while taking part in an occupation of land claimed as indigenous territory.

Llaitul and seven other self-defined Mapuche “political prisoners,” in jail for their involvement in occupations of land claimed as part of the ethnic group’s ancestral territory, talked to a dozen foreign press correspondents, including IPS, in the El Manzano prison in the city of Concepción, the capital of the region of Bío-Bio.

The activists are in preventive detention on charges ranging from “terrorist association” to attempted homicide against prosecutor Mario Elgueta and two detectives who formed part of a team on their way to search a Mapuche community in October 2008.

César Parra, 26, who is married to a Mapuche woman and is in prison with Llaitul, accused Elgueta of torturing him to get him to blame the CAM leader of participating in the supposed ambush in which the prosecutor and the two detectives were injured.

The case is still under investigation.

The imprisoned Mapuche activists claim they were tortured, framed and discriminated against by the police and persecuted by prosecutors, who have invoked Chile’s severe national security law as well as the anti-terrorism law adopted by the 1973-1990 military dictatorship.

According to the non-governmental organisation Liberar, there are more than 50 Mapuche political prisoners in different prisons in southern Chile, although in September the Ethical Commission against Torture estimated at 100 the number of indigenous people in jail, either awaiting trial or already convicted.

The Mapuche number nearly one million in this country of over 16 million people. The struggle for their rights to what they claim as their ancestral lands in the south of the country has frequently spilled over into violence.

In the last few months, the conflict between Mapuche communities and the state has heated up, especially in the southern region of La Araucanía.

In July, communities grouped in the Mapuche Territorial Alliance launched a new wave of occupations of privately-owned lands to which they lay claim, leading to clashes with the police. There were violent incidents as well, with arson attacks on lumber trucks and sabotage of machinery belonging to the forest companies that own the land.

Since the centre-left Coalition for Democracy first began to govern in 1990, more than 650,000 hectares of land have been transferred to indigenous communities – 35 percent since President Michelle Bachelet took office in 2006. But some Mapuche groups say not enough progress has been made in restoring their ancestral land, which was taken from them in a government offensive that began in the late 19th century.

In August, Jaime Mendoza Collío became the second victim of the Mapuche conflict under the Bachelet administration, after 22-year-old Mapuche agronomy student Matías Catrileo was shot in the back by the police in January 2008 while trespassing on private land with a group of fellow activists.

An international mission convened in 2007 by the non-governmental Observatory for Indigenous Peoples’ Rights, which included representatives from groups like Amnesty International, Norwegian People’s Aid and the Argentine Centre for Legal and Social Studies (CELS), documented dozens of complaints of abuses, such as violent raids of Mapuche homes in which the police often destroy household goods and objects of cultural value, mistreat elderly people, women and children, and hurl racist epithets, in their search for activists wanted by the justice system.

In response to reports of violence against children and adolescents during raids on communities suspected of having had a hand in crimes under investigation by the justice system, Unicef’s (United Nations Children’s Fund) representative in Chile, Gary Stahl, recently met with several cabinet ministers to express the U.N. agency’s concern.

In an attempt to curb the escalating tension, Bachelet called an “indigenous summit” on Nov. 5 to discuss the situation, but the leaders of the Mapuche Territorial Alliance boycotted the meeting.

The Alliance says it acts independently from the traditional Consejo de Todas las Tierras (All Lands Council) and the CAM, considered the most radical Mapuche organisation.

Llaitul, a 42-year-old social worker, described CAM as “the Mapuche organisation that has been most determined to recover territory and political power.”

When it began its activities in 1997, CAM brought together large numbers of Mapuche protesters in public demonstrations, but “the repression has forced the group to largely go underground,” he said.

“People begin to organise in a conspiratorial manner out of necessity,” Llaitul told the reporters.

According to the activist, who said he took part in the resistance against the dictatorship of Gen. Augusto Pinochet, “CAM is a danger to the state because its struggle is political and ideological. We don’t want to be Chilean peasants,” he said.

Since the group first emerged, it has claimed responsibility for attacks on forestry companies, such as setting fire to their machinery – acts that they define as sabotage against the private interests that have stolen their territory.

Without the actions carried out by CAM, the Mapuche would not have begun to recuperate their land, Llaitul argued.

Acquitted on two previous occasions of the charges of “terrorist association” and “terrorist arson,” Llaitul justifies the confrontations with the police and prosecutors as acts of defence by the indigenous communities.

“There is violence on both sides,” he admitted, although he stated that he and his fellow activists only support actions that do not lead to bloodshed.

“We haven’t used explosives or weapons of war,” he said.

He also denied police allegations that they use children as “human shields,” or that members of the CAM have received military instruction from the Revolutionary Armed Forces of Colombia (FARC) or the Basque separatist group ETA, although he did acknowledge ties with other indigenous organisations in Latin America and with international solidarity groups.

Llaitul maintained that the “official right-wing press” have come together to manipulate information and “discredit” the Mapuche people by reporting such false allegations.

The ultimate goal of the struggle, he stressed, is the “rebuilding of the Mapuche nation” – a long-term project, considering the difficulties faced by the communities in laying claim to land that is “highly coveted by business” because of the forestry, water and mineral resources it contains.

Referring to Mapuche people who do not agree with the strategies used by CAM or other groups involved in the movement seeking to recuperate ancestral lands, Llaitul called them “ignorant” and “comfortable” and said they had not yet “woken up” or preferred others to do the dirty work for them.

But he said “they are not a majority” – by contrast to the government’s claim that radical activists make up only a small minority in the Mapuche community.