ROME, Nov 16 2009 (IPS) - World farmers are not part of the official delegations at the Food and Agriculture Organisation (FAO) food summit on food security that opened here Monday. But they came anyhow to express their views, since, they say, it is their communities that are most impacted by the food crisis. 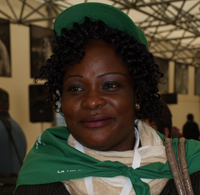 Small-scale producers from the Amazonian rainforest, from Africa, the Pacific islands and the Himalayas gathered in Rome for the Peoples’ Food Sovereignty Forum (Nov. 13-17), held in parallel to the FAO meetings, to discuss the serious effects of the crisis in their communities.

Small farmers and other small food producers number more than 1.5 billion in the world, the civil society forum estimates. “They produce more than 75 percent of the world’s food needs through peasant agriculture and small scale livestock production, and with artisanal fishing,” organisers say.

According to the FAO, the number of hungry people rose this year to 1.02 billion people, as a result of the global economic crisis, high food and fuel prices, drought and conflict.

“The amount of hungry people announced by the FAO includes, for the vast majority, those who produce food,” Antonio Onorati, of the International Civil Society Planning Committee (IPC), told IPS. “And this represents the most incredible aspect of hunger.”

Indigenous knowledge and practices have the potential to improve local and global food security, farmers’ organisations say, but they still struggle to be recognised.

Key issues on the table of farmers’ and peasants’ organisations these days basically concern who decided food and agricultural policies; where these decisions were taken; who controls food producing resources; how food is produced; and how to help people who do not have direct access to food, namely the urban poor.

Outcomes of their work will be presented at the FAO summit Wednesday.

Farmers’ issues are not so distant from those the FAO and participant governments will be discussing. What is different is their perspective. “Those whom the World Trade Organisation (WTO), The World Bank (WB) and the International Monetary Fund (IMF) consider as victims are in fact the real protagonists, they are able to produce enough food for themselves, if they are allowed to,” Onorati said.

Among the causes of food insecurity for indigenous communities, farmers point to the loss of land, territories and resources, and the non-recognition and violation of their indigenous rights.

According to Renée Vellvé of the global Ngo GRAIN, access and right to land should be given priority. “The land-grabbing trend that is going on right now is where countries that have money, but depend on the outside for the food – like Saudi Arabia, Korea and others – are going to Africa and Asia to get farmlands to produce their own food outside,” she told IPS.

“Investment companies are trying to do the same just to make money, so you see governments and industries coming in and throwing farmers off their lands, especially where they don’t have secure titles; this affects women first, especially in Africa.”

Nettie Weibe of La Via Campesina agrees that returning lands to the small- scale farmers is critical. “It is so obvious – but it has been forgotten – that food production is absolutely necessary to food security, and that it is farmers who produce food and put it into the market,” she told IPS.

“But we are now so increasingly distant from our food, particularly in developed countries, that the farmer part of it has been forgotten, and in fact it has been erased by a corporate, industrial production.”

According to Weibe, local agriculture and local markets can even cool the planet. “Real genuine agrarian reform, which has been put on hold for decades, would do far more for the climate that any deal that could result from the upcoming negotiations in Copenhagen,” she said.

Vellvé said farmers’ organisations no longer believe in codes of conduct, guidelines and principles that are being discussed at the FAO. “The problem is how far they will push that, and how the governments feel about it.”

FAO’s director Jacques Diouf – who embarked on a 24 hour hunger strike over the weekend in solidarity with the world’s hungry – asked rich countries to increase the amount they give each year in agricultural aid from 7.9 billion dollars to 44 billion.

But the draft declaration that will most probably be adopted includes only a commitment to “substantially increase the share of official development assistance (ODA) devoted to agriculture and food security based on country- led requests.”

“If healthy countries do not increase investment in agriculture as requested by the FAO, this initiative will lack the concrete tools to effectively fight hunger,” Sergio Marelli, president of the civil society advisory group to the summit, told IPS.

“We know that in the last phases of negotiations, even the reference to 2025 as the deadline for the eradication of hunger has disappeared from the final declaration,” he said.