ENVIRONMENT: Save Half the Planet, or Lose It All

MÉRIDA, Mexico, Nov 17 2009 (IPS) - At least half the planet must be protected if humanity is to survive the next century, declared conservationists at the conclusion of 9th World Wilderness Congress on Friday, Nov. 13. 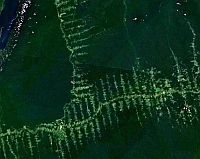 Deforestation in Amazonia, seen from satellite. The roads in the forest follow a ypical "fishbone" pattern. Credit: NASA

“That is what the science said, this is what many aboriginal people say,” said Harvey Locke, the Wild Foundation’s vice president of conservation strategy.

“It’s time to speak the simple truth: The whole thing unravels without protecting at least half of the planet,” said Locke.

A leading economic report released in Brussels also on Nov. 13 pegged the cost of the ongoing loss and degradation of nature’s “infrastructure” at a staggering 2.5 trillion to 4.5 trillion dollars a year.

“We all know we aren’t sustainably managing the Earth,” he told participants at the WILD9 congress, a partnership between the WILD Foundation, an international, non-governmental non-profit based in the United States, and Unidos para la Conservación, a conservation organisation in Mexico.

“It is time for us to state clearly the scale of conservation intervention needed to make the 21st century one of hope instead of despair,” he said.

In 1982, experts like Miller pushed for protection of 12 percent of each major ecological zone in each country of the world by 1992. Many countries eventually achieved this by 2009, but with a fuller understanding of climate change and other threats to humanity it is now clear at least half the planet must be under some form of protection, Miller told IPS in Merida.

“We must protect and restore the systems that drive the living planet and provide us with air, water and food,” he said.

Living things regulate the climate, recycle and clean the air, water and organic matter. In the past few hundred years, human beings have greatly disrupted those natural processes through deforestation, overfishing, and more recently through pollution and emissions of greenhouse gases.

Correcting this accidental and destructive geoengineering of the planet requires setting aside very large but connected parts of the oceans and land. Humans would not be excluded, but human development and activities like industrial fishing, mining, agriculture, plantation forestry and so on will need to be banned so that nature can restore itself, cool the planet and provide the vital services we need, Miller said.

Humanity needs to change where we live in many cases, ensure that everything is recyclable, generate our own energy and eliminate the use of coal and oil, he said. “Our vision is a landscape of human settlements interwoven with large patches of wild nature,” Miller explained.

Nature is a form of infrastructure requiring investment and protection just like built infrastructure, said economist Pavan Sukhdev, who heads up the Economics of Ecosystems and Biodiversity (TEEB) initiative backed by the United Nations and a number of individual governments.

However, exactly the reverse is happening. Nature’s infrastructure is being destroyed by human activities representing a stunning estimated loss of 2.5 to 4.5 trillion dollars a year for each of the last 25 years, said Sukhdev, who is on leave from Deutsche Bank, one of the largest global financial institutions.

“We cannot continue our stewardship of this planet if we keep looking at public benefits and public wealth as somehow subordinate to private wealth,” he said in Merida, the day before the TEEB report was released in Brussels.

The current economic system does not capture the value of nature and the vital services it provides, Sukhdev stressed.

Economics is just a tool that can be re-directed towards goals other than maximising growth and profit. The economic system needs to be redesigned so that its purpose is to value and protect nature and human communities, he told IPS in Merida. One way forward is to “tax what we take, not what we make”.

Numerous studies also show that investments in protected areas generate a cost-benefit ratio of one to 25 and even one to 100 in some cases, he said. Planting and protecting nearly 12,000 hectares of mangroves in Vietnam costs just over a million dollars but saved annual expenditures on dyke maintenance of well over seven million dollars, the TEEB study reports.

Economics can never capture the full value of nature, Sukhdev acknowledged. Tropical coral reefs sustain half a billion people worldwide but are already in deep trouble around the world. Marine science concludes that atmospheric concentration of carbon dioxide must decline from the current 387 parts per million (ppm) to 350 ppm if corals are to survive.

However, the negotiators heading to Copenhagen in December are aiming for 450 ppm and few believe they will be able to agree on how to accomplish that.

“Four hundred and fifty ppm means dead corals and 500 million people who will have to be looked after,” said Sukhdev.

The most obvious first step is to end government subsidies that drive economic activity that damages the environment. And first among those is ending the 240 and 300 billion dollars in annual price and production subsidies for fossil fuels, he said.

An equally important step is halting deforestation, the source of up to 20 percent of annual carbon emissions and a loss of 2.5 trillion dollars worth of nature’s “infrastructure”. Old growth or primary forests currently absorb 15 percent of human fossil fuel emissions, representing the best and cheapest form of carbon capture and storage (CCS), said Sukhdev.

The Wilderness Congress also released a formal Merida Message (Mensaje de Merida) calling on negotiators in Copenhagen to ensure all primary forests, wetlands, grasslands, and peatlands are protected under the United Nations Framework Convention on Climate Change (UNFCCC). Not only do these regions store and absorb large amounts of carbon, when degraded or converted to other uses, they release far more carbon.

“We are used to 10,000 years of climate friendliness. We are not aware of the real danger we are in,” said Sukhdev.