NEW DELHI, Nov 9 2009 (IPS) - Regardless of success at the upcoming climate talks at Copenhagen this December, there will still be a 2.5 degree rise in temperatures. 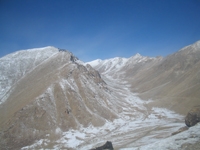 Dr Veerabhadra Ramanathan, director of the Centre for Atmospheric Sciences of the Scripps Institute of Oceanography at the University of California-Berkeley, has predicted that an “incredibly complex blanket” of greenhouse gases called the ‘Atmospheric Brown Cloud’ (ABC) will ensure such a temperature rise.

At an international gathering of climate science journalists in the Indian capital late last month, Ramanathan, a pioneer of global warming science and discoverer of the notorious ABC, said the world’s focus on reducing emissions without paying equal attention to reducing the ABC would have practically no effect on reducing global temperature rise.

“Even if COP15 [the 15th Conference of the Parties to the United Nations Framework Convention on Climate Change] at Copenhagen this December were to succeed in agreeing to a 50 percent reduction in emissions by 2050 from industrialised nations, half of all carbon dioxide emissions, currently at 8.5 billion tonnes yearly and increasing, remains in the atmosphere for over 100 years,” explained Ramanathan.

“So even if COP succeeds you still have at least 2.5 degrees rise in global warming.”

A new and more ambitions global agreement on climate change is expected to be drawn in the two-week summit in Copenhagen, which would complement the Kyoto Protocol, set to expire in 2012.

The ABC is a dense blanket of smog hanging low over the atmosphere in many parts of the U.S., including a dramatically visible one over New Delhi, Los Angeles, Brazil and Africa, but at its densest over China and South Asia.

The smog is caused by ‘black carbon’ or soot emitted from burning biomass, such as from wood stoves and vehicular emissions, especially from diesel.

Ramanathan along with India’s leading glaciologist Dr Syed Iqbal Hasnain of The Energy Resources Institute at New Delhi and Dr Rajesh Kumar, scientific officer of glaciology at the Birla Institute of Technology at Rajasthan in northwestern India, agreed that the ABC is melting the Himalayan glaciers with its black carbon aerosol deposits on the snows.

Kumar said the Himalayan glaciers are retreating at the rate of 21.3 metres per year.

The ABC has a double-negative effect of trapping greenhouse gases low over the earth while simultaneously blocking the good effects of the sun from entering the earth’s atmosphere. Ramanathan thus likened it to a “double whammy” of global warming gases trapping certain parts of the world.

As far as the Intergovernmental Panel on Climate Change—an international scientific body —is concerned, black carbon is the largest contributor to the atmospheric brown cloud, forming as much 55 percent of its composition in certain areas of the atmosphere over the earth. Ozone contributes 20 percent to the brown cloud, methane forms 30 percent and halocarbons, 20 percent of this mass.

Ramanathan’s discovery of the ABC, caused by carbon emissions from burning wood stoves—the findings of which were published shortly before the World Summit on Sustainable Development (WSSD) in 2002 at Johannesburg—drew an angry rebuttal from developing nations like India.

He had previously called ABC the ‘Asian Brown Cloud’, until he realised it extended beyond the Asian region.

The well-known New Delhi-based Centre for Science and Environment (CSE) accused Ramanathan of deflecting attention from the U.S. and industrialised nations’ responsibility to reduce atmospheric emissions just prior to the WSSD, the importance of which to developing nations was likened to the Earth Summit in Rio de Janeiro 10 years earlier.

Sunita Narain, director of CSE, said the report, besides being political, offered no respite or solutions to millions of poor people in south and southeast Asia, who depend on fuel stoves for cooking.

“We handled the issue as a scientific one without human concerns, so I was wrong. It is a worldwide problem,” admitted Ramanathan in New Delhi last week. The name of the notorious gas blanket was also subsequently changed to ‘atmospheric brown cloud’.

“I don’t know why India should feel defensive,” mused Ramanathan to journalists at a congress of the International Federation of Environmental Journalists in Delhi. “Its global carbon-dioxide emissions are less than 2.5 percent,” he said.

In 2002 Ramanathan said a study called the ‘Indian Ocean Experiment’, a Europe-India- U.S. collaboration which dug deeper into the seasonal phenomenon was initiated. Satellite and aerial maps over the world in 2006 and 2007 showed a ‘huge’ brown cloud over China, South Asia and parts of South-east Asia.

This black carbon is now threatening the world’s mountains as never before. Satellite imagery from the U.S.-based National Aeronautics and Space Administration has shown black carbon residue particles on Mount Everest. Along with the trapped greenhouse gases over the snows, atmospheric temperature rise is melting glaciers.

At Leh last week in the hauntingly desolate landscape of a mountainous desert in Kashmir state of northern India, the international French non-governmental Groupe Energies Renouvelables, Environnement et Solidarités, or GERE, said glacier retreat is now a reality in every part of Ladakh district.

The organisation analysed meteorological data of the region from 1973 onwards and found an increase of over one degree centigrade in the last 35 years for the winter months in Ladakh, a sharp increase in summer temperatures in July and August, coupled with an equally sharp decline in snowfall December to March.

Seventy percent of the region’s snowfall, which feeds the water basins of the entire region extending down to the plains beyond, falls during these winter months.

Although no fast statistics have yet been compiled on the contribution of black carbon to the Hindu Kush and Himalayan-Tibetan glaciers, Prof Hasnain said during last week’s field visit of journalists to Leh that as much as 50 percent of Himalayan glaciers are affected by black carbon deposits.

“They are definitely shrinking,” said Hasnain. “We have to link climate change with the drivers of glacial melt.” He added that China, along with India, has yet to take strong measures to stop its emissions of black carbon aerosols.

The good news about black carbon, said Dr Ramanathan, is that it can be removed in as fast as 10 days if adequate measures are taken to stop its emission.

Both Ramanathan and Hasnain are pressing for buttonholing the transport sector in India. “We could start with mandating the use of diesel particulate filters in transportation trucks,” said Ramanathan. He added, though, that the problem also requires western nations to cut their carbon emissions.

The prospects for removing biofuel cooking stoves from the masses of poor in India and the rest of Asia, however, remain elusive.

“If only we could provide an alternative fuel,” said Ramanathan wistfully.