GENDER: For U.S., Lessons in CEDAW From San Francisco 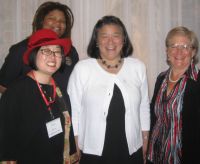 Tired of the U.S. government’s refusal to ratify CEDAW, women’s activists pushed the city government to adopt the convention’s principles, in an effort to improve local women’s lives.

An ordinance was passed, and now, more than a decade later, San Francisco is reflecting on their success in reforming the city’s government agencies, and taking on a push for change in the local private sector.

The original ordinance created a dedicated staff person; soon after, a task force was established, and ‘Guidelines for a Gender Analysis’, emerged: a tool for city departments to evaluate where and how discrimination was taking place.

“We knew that the city departments on their own, didn’t have the mechanism or the understanding just to take the ordinance and say ‘here’s where we are failing’,” says Krishanti Dharmaraj, a member of the task force until 2004.

“(City departments) had to report their findings to the CEDAW task force, and had to tell (the task force) what they were hoping to do to eliminate discrimination,” she says.

Predictably, the needs and the results varied by department.

The Department of Environment went from being male-dominated to having a majority of female engineers on staff.

The city’s department of juvenile justice identified the need for a girls advocate on staff, and instituted gender specific programs for young women in the system.

The department of public works now takes the safety of women into consideration when choosing the distance between streetlights, and making other night time lighting decisions. They also established a job centre where open positions were posted; previously an ‘old boys’ network resulted in many jobs going to friends of current workers.

Since its adoption in 1998, San Francisco's efforts to meet the standards laid out in CEDAW had mainly been confined to city employees.

"We were kind of reluctant about bringing some of these ideas to the private sector because we didn't feel we had any leverage," says Emily Murase, the executive director of San Francisco's Department on the Status of Women

"But when we did we were amazed."

"Some of the largest employers in San Francisco, like The Gap (and) Charles Schwab had been hemorrhaging women at senior levels because of the inability to balance work with their family lives."

The result is a series of 'round tables' held every few months, to examine one of the 7 Calvert Women's Principles established by the socially responsible investment firm: Employment and Compensation; Work-life Balance and Career Development; Health, Safety and Freedom from Violence; Management and Governance; Business, Supply Chain and Marketing Practices; Civic and Community Engagement; and Transparency and Accountability. The goal is to create a set of indicators and action steps to achieve each principle, which other interested companies can then use as goals and policies of their own.

Round-table participants range from small local companies, to international corporations like Symantec, a software security company with more than 17,500 workers in 12 or 13 offices around the world.

Like many tech companies, Symantec has difficulty attracting female employees. Cecily Joseph, the director of Symantec's corporate responsibility programme, says their 28 percent is standard for the industry. "We realise that not only is it important to bring more women into technology just because the pool of engineers is small anyway… we also realise the importance of a diverse and inclusive work culture, just as a competitive advantage."

Joseph says internalising principles like Transparency and Accountability, could present 'challenges' for some employers - but they also present possibility for a radical change in how businesses conduct themselves.

"You're going to tell the public what you're doing about this; you're going to tell your stakeholders how you're living up to this," says Joseph. "For many companies, that's definitely a new area, and a place that they haven’t gone before."

With San Francisco city staffers still responsible for monitoring government agencies, private companies are left to assess their own progress. But Ann Lehman, senior policy analyst for San Francisco's Department on the Status of Women, says the current corporate attention being given to sustainability makes the women's principles an easier sell. She hopes that companies wanting to "keep up with the Joneses" will extend that enthusiasm to improving gender equity.


Emily Murase, the former chair of the Task Force, and current executive director of San Francisco’s Department on the Status of Women, (a department that existed before the CEDAW adoption) says an experience with the city’s arts department exemplified to her how internalising the CEDAW principles could alter both women’s lives, and the community as a whole: it centred around a daily permit lottery for artists who wanted to sell their wares on the city streets.

“A woman with childcare responsibilities couldn’t make it there at 8:00 am, so she was repeatedly losing out on this lottery.”

After initial resistance, the arts commission agreed to allow proxies to come and represent the artists, in order to pick up a permit.

“That doesn’t just help women, but any person with care-giving responsibilities who can’t show up in person,” points out Murase.

“Not all of this can be attributed specifically to CEDAW,” says Ann Lehman, senior policy analyst for the city’s Department on the Status of Women. “But it all grew out of the work that was done initially, raising the consciousness level of people around these issues.”

“What CEDAW did was take something from the bottom that was not considered a priority for the city – because there were other pressing issues – and place it on the top,” adds Dharmaraj.

Overall, Lehman says the entire city government went from being “Very bureaucratic, be here at 8:00 in the morning, work until 5:00, no exceptions” to a “much more flexible work style across the board…now we have things like paid parental leave…which most cities and counties and states still don’t have.”

Unfortunately, the ordinance doesn’t allow legal action against city agencies that do not make policy changes. As a result, Murase says, “The fundamental philosophy behind our approach is that it’s voluntary.”

The original task force was disbanded in 2006, and has been folded into the Department on the Status of Women. Without any actual budget, the five staffers in that department do CEDAW monitoring as part of their normal job.

The Department on the Status of Women is currently working on a gender analysis of the entire city budget, to and has begun to take aim at reforming companies that do business in San Francisco, with a series of roundtables involving local corporations. (see sidebar)

Although advocates hope that with Barack Obama in office, the United States may finally ratify CEDAW, in the meantime, local initiatives like San Francisco’s may be the only way to proceed. But while Lehman and others frequently provide advice to other cities interested in adopting CEDAW principles, Los Angeles is the only U.S. city to do so thus far – and L.A. is plagued with a common problem – a lack of resources to put CEDAW into action.

“We’ve been speaking to a number of different commissions on the status of women (in other cities) but nobody has permanent staff,” says Murase. “There isn’t this sort of institutional agency that can carry it forward.”

Dharmaraj says that inaction, often motivated by the economic fears of corporations, is short sighted. She adds that while San Francisco still has a long way to go until all women’s lives are significantly improved, the city’s success is proof of the benefits of CEDAW.