GENDER-SOUTH AFRICA: ‘There Is A Sense Of Vindication’

ROME, Nov 26 2009 (IPS) - Born in a squatter camp in Orlando East and raised by a single mother; working in a factory while completing secondary school by correspondence; arrested and banned by the apartheid government: South Africa’s ambassador to Italy is an example of the long road her country has travelled. 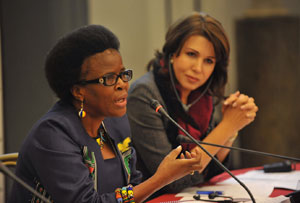 'This is our time. We can avoid repeating mistakes and learn from other's experiences' Credit: Victor Sokolowicz/ IPS

In the context of an international conference on gender violence and the role of media in Rome – organised by Inter Press Service and supported by the Italian Ministry of Foreign Affairs and the City of Rome – Mtintso, a gender activist and former journalist, spoke with IPS about the story behind the scenes of the fight for gender equality in South Africa.

IPS: South Africa is in the sixth best position in the latest Global Gender Gap index by the World Economic Forum. “The latest data reveal that South Africa made significant improvements in female labour force participation in addition to gains for women in parliament and in ministerial positions in the new government. South Africa holds the top spot of the region in political empowerment.” Do you feel vindicated? THENJIWE MTINTSO: There is a sense of vindication, yes. Also of awareness, in the sense that, when I was a journalist in the 1970s, (the issue of the discrimination against women) was sometimes considered out of place (within the struggle against apartheid), to the point that some women were wondering ‘are we talking foolish?’ The view among the people undertaking the social struggle against the apartheid regime was that, since women are part of the nation, there was no need to make a difference.

So women were driven closer in the environment previous to the first elections (in 1994). They got together and decided they weren’t going to let men speak on their behalf.

IPS: You have highlighted that fact that South Africa is in a better position than Italy (ranked 72 in the GGG index). TM: There is a historical difference. We have undergone a huge crisis. The struggles that we went through created a different dynamic that made this possible.

IPS: However we are talking about a country that has the world’s highest number of rapes per capita (1.19538 per 1,000 people), according to Seventh U.N. Survey of Crime Trends and Operations of Criminal Justice Systems, covering the period 1998-2000. More than 25 percent of South African men questioned admitted to raping someone, according to a recent study conducted by the Medical Research Council (MRC). What are the main areas in which discrimination is still pervasive? TM: This problem is very serious. With the improvements, there have been backlashes. What happened is that the faster we were going (in terms of gender equality), the more challenges men were facing. And some of them were not ready to be led by women, they were not ready to have their women earning more, they were not ready to transfer leadership roles to women.

Unfortunately, the violence was a response. We have young men beating young women. The economic strains are making things worse. Men are supposed to provide for their families (while the crisis is affecting their capacity to do so). Men’s frustrations combine against women.

IPS: Another African country, Lesotho, has advanced six positions, from 16th to 10th, getting in the elite list of the ten countries with the narrowest gender gaps in the world. Among the ten best positioned countries there are six Europeans, two Africans, two from the Asia-Pacific region. In fact, Liberia has the continent’s first female head of state, Ellen Johnson-Sirleaf (women serve in senior positions in several other countries as speakers of parliament, prime ministers and vice-presidents). And the legislature of Rwanda has the highest proportion of women in the world, with 56 percent of members of parliament being women… Do these developments say something about Africa in general? TM: This is our time. South Africa, and Africa in general, can avoid repeating the mistakes other countries have done because we can learn from other’s experiences. We were only liberated in the 1990s, so we are walking together towards democracy and equality.

Tanzania is implementing a system of female quotas; South Africa has quotas in its ruling party. Others are implementing mechanisms to attain equality. And all this has had an impact on the quantities. And without quantity, quality is not possible.

IPS: You mentioned the economic crisis. The GGG report suggests there is a direct link between low gender gaps and high economic performance. One African example is Chad,ranked 133 in the GGG index, ahead of only Yemen and in a very poor position in the Global Competitiveness Report. At the other end of the spectrum, South Africa fares quite well, in sixth position in the gender gap table and 45th on the global ranking of competitiveness by the WEF. TM: There is a lesson to be learned. The economic and political environment is critical for the advancement of gender equality.

You have higher gender equality when development allows gender advances, although you have exceptions like Rwanda (with a narrow gender gap and low levels of development).

But it works the other way around too. When you free the potential of women, which is locked out by constraints and discrimination, you grow faster.

You grow differently too. Women can provide innovative ways to stimulate entrepreneurship. Women who are involved in small businesses have different experiences that can be valuable for development. Involving more women is likely to have a positive impact on economic and social advancement.