NEW DELHI, Nov 11 2009 (IPS) - It is hard to say whether the Dalai Lama’s sojourn this week in India’s Arunachal Pradesh state—which China claims as southern Tibet—is a purely spiritual exercise or a trip with a deep political mission. 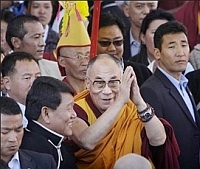 The Dalai Lama at the Tawang monastery Credit: dalailama.com

“The problem is that every move of the Dalai Lama is closely watched by Beijing and attempts are made to give a political colour to what may in fact be a religious exercise to visit followers of Lamaistic Buddhism spread through the Himalayan region and around the world,” says Rajeswari Rajagopalan, a senior fellow at the independent Organiser Research Foundation.

Earlier this month China’s foreign ministry spokesman was quoted as saying that the Dalai Lama was “always involved in activities that undermine the relations between China and other countries as well as ethnic separatist activities.”

Rajeswari concedes, however, that Arunachal Pradesh holds special significance because it was through the border town of Tawang, famed for its large monastery, that the Tibetan spiritual leader escaped to India and into exile 50 years ago.

Arunachal Pradesh also happens to be where the sixth Dalai Lama was born, suggesting that it could be the site of a future incarnation—a prospect that could prove troublesome for Beijing’s continued hold over Tibet.

“Finally,” said Rajeswari, “the Dalai Lama has consistently supported India’s claim over Arunachal Pradesh, based on a treaty signed between the 13th Dalai Lama and British India in 1914.”

Chinese official maps continue to show Arunachal Pradesh as a part of China, and international entities such as Google Earth show the territory as disputed —despite protests from India.

Arriving in Tawang on Sunday, on what his aides call a “teaching mission,” the Dalai Lama expressed concern over China’s territorial claims. He told reporters that although the Chinese army had occupied Tawang in 1962 during a brief but bloody war, it had declared a unilateral ceasefire and withdrawn. “I am a little bit surprised,” he was quoted as saying.

The Dalai Lama’s reaffirmation of Arunachal Pradesh’s status, at least as far as his ‘government-in-exile’ was concerned, drew sharp reactions in Beijing and suggestions that his trip to the disputed state was prompted by New Delhi.

“The Dalai Lama went to southern Tibet at this critical moment probably because of pressure from India,’’ wrote Hu Shishen, South Asia scholar at the China Institutes of Contemporary International Relations, in the state-run ‘Global Times’ newspaper. “By doing so he can please the country that has hosted him for years.”

Somewhat more ominously an article in the ‘People’s Daily’ on Monday quoted an anonymous scholar as saying that the presence of the Dalai Lama in Arunachal Pradesh was a “double insult’’ to China. “India may have forgotten the lesson of 1962 when its repeated provocation resulted in military clashes. India is on this wrong track again.”

On Wednesday the Chinese foreign ministry issued a statement complaining of India’s disregard for Beijing’s concerns. “The Indian side allowed the Dalai Lama to visit the disputed eastern section of the China-India border regardless of China’s grave concerns, and China is strongly dissatisfied with this.”

For its part New Delhi, though firm on allowing the Dalai Lama to travel to any corner of India he pleased to go, has chosen to play down the threats and complaints emanating from Beijing.

India’s junior minister for external affairs, Shashi Tharoor, told reporters who sought his comments at a meeting of businessmen on Wednesday: “India’s territorial integrity is not negotiable. We are anxious to move on and hope that as the visit is coming to a close, so will the conversation and rhetoric on the subject.”

Rajeswari thought that was unlikely to happen, going by past record. “Beijing must be gearing up its propaganda machine for the post-visit period,” she said.

Recent months have seen the two Asian giants vying for regional influence and making a presence on the global stage while bickering over visa policy, trade imbalances and even on how the waters of the Tsang Po River, which enters India at Arunachal Pradesh to become the Brahmaputra, can be shared.

India has announced a beefing up of troops and air power in Arunachal Pradesh amidst reports of incursions across the McMahon line drawn up under the 1914 treaty, which India recognises as the border but China does not.

On the other hand, India has taken the position that any tension between the two countries was largely “media hype” and that there was nothing between Asia’s two giants that could not be resolved through talks.

India has also denied that there is any political significance to the Dalai Lama’s visit to the disputed territory and said that he was going there on his own volition rather than on any prompting from the government.

“We do not deal with the spiritual travels of a spiritual leader,” Tharoor told reporters. “As far as I am aware, the initiative would have come from him and the government would have been informed about it.”

“For India to keep Arunachal [Pradesh] based on the McMahon line, the only choice is to recognise Tibet’s independence. It cannot legitimise the McMahon line otherwise,” Tsundue, born in India to Tibetan refugee parents, wrote in an article in the ‘Times of India’ on Wednesday.

“India may not be able to summon the courage to support the movement for Tibetan independence overtly, but it is important that it stands firm on its own position,” Tsundue added.

That, apparently, is what India is doing.