LITERATURE/WOMEN: “When a Woman Wins, It is Still a Story” 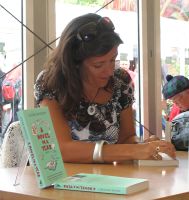 2009 will be remembered as the year when two women, Herta Müller and Hilary Mantel, were awarded two of the most prestigious literature prizes. But all things being equal, shouldn’t something like that happen more often?

After all, in most markets more women read novels than men. Industry statistics from the U.S. Bookseller Association and Book Industry Study Group indicate that Women’s Fiction comprises at least 40 percent of adult popular fiction sold in the U.S. and approximately 60 percent of adult popular fiction paperbacks. According to a Gallup Poll, we’re talking of a 24 billion dollar industry. There is a similar situation in other languages too.

Louise Doughty – a novelist, playwright and critic – spoke with IPS about women’s standing in literature and the role of literary awards and gender. Doughty has worked widely as a critic and broadcaster in Britain, and was a judge for the 2008 Man Booker Prize for fiction.

IPS: Three women (Nadine Gordimer, Toni Morrison and Wislawa Szymborska) were awarded the Nobel Prize in Literature during the ’90s, and another three (Elfriede Jelinek, Doris Lessing and Herta Müller) so far since. Do you think the Nobel is getting closer to equal representation? LOUISE DOUGHTY: Things are definitely improving. But the improvement is still very slow. I think we’ll all know we have reached equality in literature when nobody thinks it is remarkable when a woman wins a prize. But at the moment, when a woman wins a prize, it is still a story.

IPS: People were saying that women dominated this year’s awards because there were quite a few in the shortlist for the Man Booker Prize… LD: That is very funny. I was on a radio show in Britain, and they were talking about women ‘dominating’ the shortlist. But actually there were three women and three men. Apparently that amounts to domination! As a Man Booker judge, I felt (this year) the press was ready and waiting for a controversy about gender. They were ready to manufacture it.

(Literary awards) seem to be more representative in recent years. But that is a recent development. If you remember, the Orange Prize for Fiction, which is for literature by women, was set up in response to a year in which the Man Booker Prize had no women at all in the shortlist. That is when a group of women said ‘this is ridiculous,’ and created the Orange Prize (in 1992, and launched in 1996).

IPS: Peter England, a member of the Nobel literature prize jury, said the panel has been too “Eurocentric” in picking the writers. How come that is a problem now, but the fact that only 10 percent of the winners have been women is not? LD: I think that he has a point. It is worth noting that there were too many European novelists, but it is also worth noting that there were too many men. And the Nobel Prize is not a prize that publishers can enter their novelists for. It is a fairly secretive process. And processes like that always favour the status quo, the establishment or the people they are used to, mostly white European males. So, I think he has a point; he just needs to extend the point further to include the low representation of women on the prize as well.

I suppose it is always difficult with these prizes where there is no transparency. With the Man Booker Prize, the rules of entry are very clear and obvious. The Nobel Prize is different. It seems to be a process that favours who you know, reputation and all these kinds of things.

IPS: You are reported as saying that male academics who “have their eye on their reputations” should not be invited on to judging panels, as they are too concerned with picking a “highbrow” author who reflects well on them. How would improving the quality of the panels benefit women? LD: I think that most judging panels should aim for parity between men and women as much as possible. That just seems sensible. If you get a lot of male judges, you’ll get a lot of male winners. Because judging literature is not just about quality, it is about personal preference. People do often like novels in which they recognise themselves, not just human nature. And it seems to me obvious, historically, that when juries have consisted of white middle-aged men, a lot of the winners have consisted of white middle-aged men.

(However) those remarks I made about male academics were quoted out of context. They were part of a long discussion about the nature of judging the Man Booker Prize. They were blown out of all proportion by journalists, and given a headline that was not exactly what I said. But what was interesting to me about the whole scandal is the reaction from the male academics. Completely poisonous… and these from men that are the best academic minds in our country! And all they could do is riddle personal abuse. That made me feel maybe I had a point without realising it.

IPS: How is women’s fiction different from just fiction? Should publishers and bookstores differentiate women’s fiction from mainstream fiction? Do you think these distinctions affect female writers’ standing in literature? LD: They do. The problem is that this is an issue of marketing. Publishers need to make money. They will always market books in a way that is similar to the books that they sold before. So a lot of very good women writers who write anything with a romantic angle get trapped in a kind of ghetto, which is very difficult to get out of. Although this has improved.

Historically there has been a sense that a novel by a woman is domestic. But some people have started pointing out that novels by Martin Amis, Richard Ford or Philip Roth are about very domestic concerns, they are about relationships. They are doing it from a male point of view, but their novels are no less domestic than a novel written by a woman. And there is now a recognition that writing about relationships doesn’t make you domestic necessarily.