LIMA, Nov 13 2009 (IPS) - Vice President Luis Giampietri, accused of taking a hand in irregular arms deals in the 1990s, has the dubious distinction of being the highest-ranking member of the Peruvian government to face criminal charges for corruption. 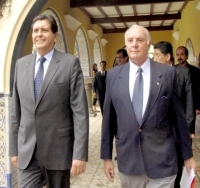 Giampietri, a retired vice admiral of the navy, is acting president while President Alan García is on a trip to Japan, Singapore and South Korea.

The accusations refer to the period when Giampietri was in charge of arms procurement for the Navy, in 1994 and 1995. Former president Alberto Fujimori (1990-2000), then in office, is now serving long prison sentences for human rights violations and corruption.

Lawmaker Victor Andrés García of the opposition Parliamentary Alliance has presented a motion to remove Giampietri from office because of the accusations.

“We propose the vice presidency be declared vacant due to moral incapacity, because Giampietri has been charged by a prosecutor for extremely serious crimes,” García told IPS.

“Giampietri faces criminal charges, and therefore lacks the moral capacity to replace the head of state,” he added. “Until his legal situation is clarified, he is incapable of representing the nation.”

After a five-year investigation, anti-corruption prosecutor Marlene Berrú concluded that Giampietri was responsible for the questionable arms purchases for the Navy in 1994 and 1995.

According to Berrú, he used his position to favour supply companies belonging to members of a corrupt network headed by then presidential security adviser Vladimiro Montesinos.

Giampietri is alleged to have approved purchases of military equipment from companies specifically selected by Montesinos, who received millions of dollars in commissions in return, subsequently found in accounts in his name in Switzerland.

The vice president is accused of collusion and conspiracy to commit a crime, along with 30 other naval officers who participated in buying cutting-edge equipment like missiles, torpedos and engines for a total of 45.9 million dollars.

Giampietri publicly stated that Berrú’s accusation “is untenable and lacks foundation.” “I appeared three times to clear myself of these charges, because I have nothing to fear,” he said.

He also said the purchase deals did not do the state any harm, “because the equipment that was bought arrived in the country and was used for national defence.”

Berrú said whether or not the equipment reached the Navy arsenals was not the point; the problem was that the bidding procedure was rigged in favour of companies owned by Israeli citizen Moshe Rothschild and Peruvians Enrique Benavides and Claus Corpancho.

As has been proved by the justice system, these company owners bribed Montesinos in order to secure armed forces contracts for their goods.

Rothschild and Benavides have been fugitives from justice since 2001, and Corpancho has been in prison in Lima since 2007, when he was extradited from Spain.

Rothschild, Benavides and Corpancho organised the sale to Peru of 36 MiG-29 warplanes from Belarus for 410 million dollars, between 1996 and 1997, a transaction for which, as Fujimori admitted, Montesinos took a bribe.

“We do not advocate removing Giampietri as first vice president. But we view it as improper that a person accused by a prosecutor should be acting president,” said Daniel Abugattás, spokesman for the opposition Peruvian Nationalist Party (PNP).

“Indeed, a person facing such a serious charge should not be in an important post until his situation has been clarified,” he said.

Giampietri was also involved in the trial of those responsible for the 1986 massacre committed by naval forces when quelling a riot by Sendero Luminoso (Shining Path) suspects at the El Frontón prison, which left at least 118 inmates dead. Alan García, then in his first term as president (1985-1990), is one of the accused.

In 2002, Giampietri was elected city councillor for Lima for the pro-Fujimori party Vamos Vecino, and in 2005 he joined the Chimpún Callao political movement headed by Alex Kouri, the mayor of Callao, Peru’s main port.

Kouri was filmed on video negotiating with Montesinos to get one of his relatives, prosecuted for drug trafficking, out of jail. On another tape, Kouri’s brother Albert, a former lawmaker, was recorded receiving a bribe from Montesinos.

In 2006, Giampietri ran for vice president on Alan García’s presidential ticket as a result of an alliance between the now governing Peruvian Aprista Party (PAP) and Chimpún Callao.

Giampietri was the PAP candidate for the first vice presidency and for Congress, in spite of having been accused in 2003 of involvement with irregular arms purchases by an investigating commission chaired by PAP legislator Javier Velásquez.

The commission’s report was sent to prosecutor Berrú, who confirmed the allegations against Giampietri. Velásquez, his accuser, is now prime minister.

PAP congressman Edgar Núñez said the accusations against Giampietri are politically motivated, and that the vice president would be cleared in court.

“There are no grounds for the accusation,” Núñez told IPS. “Giampietri is a demonstrably honest person. Congressman Víctor Andrés García’s motion to remove the vice president is an irresponsible exaggeration, because the presumption of innocence should prevail, especially in the case of a high official.”

When Giampietri stood for the vice presidency and Congress, he did not mention on his curriculum, as required by law, that he had been involved in a congressional investigation and was under investigation by anti-corruption prosecutors.

“I was only obeying orders,” Giampietri said at the time. “No naval officer took a bribe.”

Giampietri may have been telling the truth about obeying orders, because among the company owners who benefited from his decisions about the contracts was Víctor Posso, the brother-in-law of then naval commander Américo Ibárcena, who was Giampietri’s direct superior.

Ibárcena was also a member of Montesinos’ vast network of corruption, and is now serving time in prison for corruption (as is Montesinos himself, considered the eminence grise during the Fujimori administration).

Giampietri is the deputy head of Chimpún Callao, the PAP-allied organisation, which is also facing prosecution for corruption.

Alex Kouri, its leader, was prosecuted for the construction, at inflated prices, of a toll system on an access highway to the international airport while he was mayor of Callao.