Q&A: Impact of Crisis in Latin America Less Severe than in the Past

GUATEMALA CITY, Nov 19 2009 (IPS) - Thanks to effective social policies and measures that have strengthened the economy, most of the countries of Latin America and the Caribbean have managed to weather the impact of the global recession, although poverty has risen slightly for the first time since 2002. 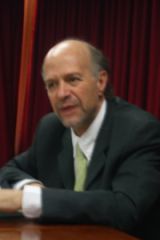 Martín Hopenhayn, the director of ECLAC’s Social Development Division, stressed the important role played by social programmes that over the last six years have improved the distribution of wealth and reduced inequality – longstanding problems in the region – in preventing serious damages from the crisis.

ECLAC (Economic Commission for Latin America and the Caribbean) reports that the poverty rate in the region dropped from 44 percent in 2002 to 33 percent by the end of 2007 – a significant drop, although 182 million people are still poor, while 71 million live in abject poverty, the United Nations agency notes.

Hopenhayn, a Chilean expert on policies on youth, cultural aspects of development, social integration and citizenship who advocates a universal income “targeted to a certain extent” to avoid “wasting resources,” spoke with IPS during a break at the Fifth Social Innovation Fair, organised by ECLAC and the W.K. Kellogg Foundation Nov. 11-13 in Guatemala City.

The countries that have managed to make a major dent in the poverty rate include Argentina, Brazil, Uruguay and Venezuela, which have combined improvements in employment with proactive social policies that have led to more equal distribution of wealth.

By contrast, the gap between rich and poor grew significantly in the Dominican Republic and Guatemala, Hopenhayn added, ahead of the presentation of ECLAC’s annual report on poverty and social spending in the region, released Thursday in Santiago.

The Social Panorama of Latin America 2009 report gauges the impact on the region of the global economic crisis that broke out last year in the United States.

IPS: Is the international economic and financial crisis in its final stretch, as some experts say? MARTÍN HOPENHAYN: In Latin America, some see the glass half full and others see it as half empty. One worrisome question is whether the U.S. government is willing to continue injecting money into the economy in order to shore up employment, which has fallen to its lowest level in 20 years. Another thing to keep in mind is that this policy weakens the dollar, damaging the competitiveness of the economies of the (developing) South.

Now, from the point of view of investor confidence and access to credit, the situation is more or less stabilised.

IPS: What is the social situation in the region after the initial blow from the crisis? MH: Although the impact was much less severe than what we have seen in the past, it was more serious than people thought it would be at first, when we believed we were safe, and we thought it was just a problem of the (industrialised) North. Unemployment has grown in general in the region. Not much, but it has increased.

Mexico was hit the hardest, because it’s so closely tied to the U.S. market, and because, like the countries of Central America, it is suffering the effects of the drop in remittances sent home by migrants abroad.

The annual ECLAC report is being launched on Thursday. But I want to point out that due to this drop in employment, both poverty and extreme poverty are going to increase slightly, although we also have to take into account that the report is based on data from 2008.

Furthermore, even once the crisis has been overcome, it’s going to take some time for international trade to recover, which will have a negative effect on Latin America, an exporter par excellence.

IPS: Even in the area of food products? MH: In that area, the growth of China and India should protect us somewhat, because their import levels remain high.

On the other hand, little attention is paid to another aspect that is important in overcoming the crisis: increasing the productivity of the economically active population, which has remained stagnant this decade, when GDP grew between four and 4.5 percent.

Access to new markets was achieved, and progress was made in other areas as well. But we still need to add value to our products, in order to make them sustainable in the long term.

Technical training is not improving, and there is a low level of public spending on innovation, and an extremely low level of investment in innovation by the private sector.

IPS: No country has made progress in that area, not even Brazil? MH: Yes, Brazil is the only country in the region to have done so. But even Chile, which is so widely praised, has seen a drop in productivity with respect to 2008, according to a recent report.

IPS: Why has this crisis had less of an impact on the region than previous ones? MH: First of all, there is the fact that we didn’t do anything to trigger this crisis, it was extraneous to the region.

IPS: But Latin America had nothing to do with the crisis that broke out in 1997 in Southeast Asia either. MH: That’s true. But we were at the centre of the crises in Mexico and Brazil (in the 1990s) and the foreign debt crisis (of the 1980s).

First of all, the macroeconomic balance in most Latin American countries meant they were strong. And secondly, this crisis occurred at a time when many countries in the region had a fiscal surplus and a current accounts surplus, a lower level of indebtedness than in the past, inflation under control and declining unemployment.

Then there is the way the crisis was confronted this time. Instead of fiscal adjustments, the traditional orthodox policy until the late 1990s, the opposite occurred: public spending was increased.

IPS: Did that have to do with the fact that most of Latin America is now governed by leftist and centre-left governments, which have not followed the neoliberal policies in vogue in the 1990s? MH: Yes, of course it has to do with the change in the Latin American political map, the shift towards the left, towards progressive policies.

IPS: Can we say that it has to do with the fact that governments have put more of an emphasis on social policies? MH: I would say that description is more precise than dividing things in terms of left and right, definitions that are more difficult to pin down these days. There has been a clear shift towards governments that put a greater priority and heavier emphasis on social policies.

You have to keep in mind that from 1990 to 2007, average social spending in Latin America increased from 10 to 16 percent of GDP, while it shrank significantly in the 1980s.

IPS: What other aspects have eased the impact of the crisis? MH: The large growth in GDP over the last five or six years, and the increase in social spending, not just in proportional, but in absolute, terms.

IPS: Elections lie ahead in countries like Uruguay, Bolivia, Chile, Brazil, and later, Argentina. Could the possibility of a return to governments that cut social spending make the region more vulnerable? MH: I think it would be very difficult today for any new government to reduce social spending. Not only because it would be unpopular, but because in many countries, some social policies have been enshrined in law over the last few years, like in the case of the reform of the pension system in Chile.

That is a big help, because it keeps social protections safe from ideological and political shifts. In addition, the idea of a stronger, more active state has gained wide popular support.

IPS: Has inequality been reduced in Latin America? MH: Yes, in nearly all countries.

IPS: But we’re still the most unequal region in the world. MH: Yes, the world champions in that respect.

IPS: Is there hope that the gap will continue to be reduced? MH: You would think that because this is a crisis without inflation, it shouldn’t tend to concentrate income like on previous occasions, when hyperinflation fueled that tendency.

IPS: What led to the decline in inequality? MH: An important component was the increase in social spending, with a heavier transfer of resources to the poor. Another was the demographic transition, with a drop in the number of children in poor households – Uruguay being an exception to that trend. A third element is the improvement in the labour situation among the poor.

IPS: With regard to these social policies that you mention, are some more sustainable than others? MH: Conditional cash transfer programmes are in fashion in the region, with broad coverage in some countries, almost like a minimum universal income. That’s the case of Uruguay, with the Emergency Plan first, and now the Equity Plan, Argentina, with its Unemployed Heads of Household plan, and now the Family Allowance programme, and especially Brazil, with its Family Grants programme, and Mexico with Opportunities.

There is a big debate on whether these are welfare-style programmes that do not generate strength or independence, that don’t encourage people to look for work, etc. But there’s an important element in all of this: something that used to be taboo in Latin America, the idea of a universal minimum income or citizen’s income, is now being discussed.

IPS: Universal? MH: “Universal” doesn’t mean the rich would also receive it. It has to be targeted to a certain extent, because otherwise it would be a waste of resources. There has to be a middle-ground between targeted and universal.

IPS: Is this a possibility in the near future? MH: I don’t know about a citizen’s income, because that’s a term that draws strong reactions. But yes, it’s possible that we’ll see increases in coverage by the direct cash transfer programmes, until reaching universal coverage among the poor, combined with expanded health care and reforms of the social security system, based on solidarity.

That would tend to even things out a bit more, and reduce inequality.