CLIMATE CHANGE: History Was Not Made

COPENHAGEN, Dec 19 2009 (IPS) - There is no Copenhagen climate treaty. History was not made here and no deal was sealed. 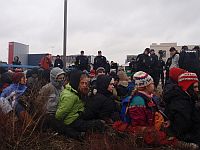 After two years of intense negotiations by 193 countries, what is abundantly clear is the enormous divide between the rich and poor countries. Poor countries want deep cuts in emissions by the industrialised world, and the latter continue to resist significant cuts and legally binding targets.

Despite the enormous pressures, high expectations and last minute efforts by 128 heads of state, all that emerged is a vague agreement of sorts called the “Copenhagen Accord”.

“Sealing the deal” on a new climate treaty has been postponed for at least a year.

Speaking of divides, civil society largely calls Copenhagen an utter disaster. It is a failure that “condemned millions of the world’s poorest people to hunger, suffering and loss of life”, said Nnimmo Bassey, chair of Friends of the Earth International. On the other hand, U.S. President Barack Obama argued that a “meaningful and unprecedented breakthrough” had been made at press conference in the Bella Centre just before midnight Friday. “All major economies have come together to accept their responsibility to take action to confront the threat of climate change,” he said.

Evidently, world leaders hadn’t been paying much attention to the previous 15 years of climate treaty negotiations.

Orr also said the gap between politics and science is finally beginning to close.

The hour is late for waking up to the reality of climate change. Two new scientific studies suggest that climate feedbacks will make the two-degree C target unlikely to be achieved without “going negative” – meaning not only does the world have to go carbon-free in the coming decades, carbon will need to be removed from the atmosphere to lower concentrations to perhaps 350 ppm from today’s 389 ppm.

It was late last night in the final hours of the meeting when the U.S. president announced that India, South Africa, China and Brazil had agreed to a backroom agreement called the Copenhagen Accord.

However, since it only involved five out of the 193 countries whose officials had spent a long two weeks in Copenhagen, some delegates were visibly upset they’d not been involved previously and the meeting continued all night. By Saturday afternoon, confusion remained over the accord’s legal status, and half a dozen nations, including Pakistan, Saudi Arabia and Bolivia, declined to support it.

In the end, the accord has no legal standing under the United Nations Framework Convention on Climate Change (UNFCCC) and participating countries merely “note” its existence and express their support or not.

Friday night, Obama acknowledged that this was just one step on a long road to meet the apolitical targets of climate science. He insisted the Copenhagen Accord is an important first step because countries agreed to deep long-term cuts in emissions with the goal of holding the increase in global temperatures below two degrees C.

Developing countries also agreed to take both voluntary action to reduce greenhouse gas emissions and to increase those actions if financial support was provided. And there was agreement that rich countries must mobilise 100 billion dollars a year by 2020 to help developing countries protect their forests, adapt to climate change and reduce their emissions.

They also agreed to work towards a legally binding treaty to be concluded by the end of next year in Mexico.

“The U.S. is not legally bound by anything that took place here in Copenhagen,” Obama was careful to point out.

Domestically, the United States is a divided country, and a long way from making binding commitments on climate.

Not an hour after Obama’s opening speech to the plenary Friday morning, several Republican members of Congress and the Senate held a press conference in the Bella Centre denying climate change was caused by emissions of fossil fuels and saying the science of the International Panel on Climate Change and dozens of scientific academies around the world was suspect.

None of the U.S. politicians are scientists and all hail from regions with powerful fossil fuel or automotive interests.

“We have lost many things along the way,” said Dessima Williams of Grenada, spokesperson for the 43-member Association of Small Island States (AOSIS), regarding their reluctant acceptance of the accord. “We have lost a vigourous commitment to stabilising global temperatures at 1.5 C.”

“We believe this is critical to the survival of our member states,” Williams said in a final plenary session Saturday.

Women were also hoping for gender-sensitive text to acknowledge the reality that women are by far the most impacted by climate change, said Ana Rojas of Energia, an International Network of Gender and Sustainable Energy based in the Netherlands.

Only a third of the delegates attending the conference this year are women, which can make it more difficult for equal representation of women and men’s views in relation to climate change.

“We need a shared vision of gender in a final agreement. And not just concerning adaptation but also mitigation and financing,” Rojas told TerraViva.

While acknowledging that the accord represents some progress, it fell far short of the “fair, ambitious and legally binding agreement” that civil society had advocated. Outside the meetings, 1,800 protesters and media spokespersons were arrested on the suspicion they might do something illegal, in what civil society called attempts by the Danish government to suppress legitimate opposition and free speech.

The use of “tear gas, pepper spray, mass cages, baton charges and mass preemptive arrests sets a precedent dangerous not only for Denmark, but for the future of the world,” said Tadzio Müller of Climate Justice Action, an international network of environmental and social justice groups.