MBABANE, Dec 8 2009 (IPS) -  For close to three decades, Jeremiah Mkhonta has earned a living by selling firewood by the roadside. It’s not exactly lucrative: the father of 15 often goes for a fortnight without even selling a single four dollar bundle of firewood. 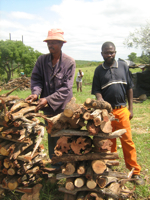 But slow business is not what is bothering this ex-miner right now. He lives in fear that one day soon, he and his peers across the country, could be arrested.

“I’ve learnt from the radio and from some of my customers that the Minister of Tourism and Environment said that we’ll get arrested for selling firewood,” Mkhonta told IPS.

Through the Flora Protection Act, 2001, the Minister of Tourism and Environment, Macford Sibandze, has threatened to take legal action against people found to be cutting down trees for commercial gain, including firewood vendors.

Although he observed that firewood vendors are cutting down trees on a very small scale, he said the action is necessary to prevent the practice from spreading.

Sibandze said the crackdown is part of Swaziland’s contribution to the response to climate change. African countries are said to be contributing 18 percent of greenhouse gas emissions mainly through deforestation.

“Inasmuch as we understand that the trees are a part of a livelihood for many people who are poor, we also have to ensure that we harvest the natural resources in a sustainable manner,” said Sibandze. “This applies across the board – whether you’re poor or not.”

Although Mkhonta has a limited understanding of what climate change is all about, he said ordinary Swazis have suffered a lot through climate change in the form of prolonged drought, but government still wants to subject them into further poverty.

“They say the drought which has stopped us from cultivating was caused by climate change. Now we have to stop earning a living because of the same climate change,” said a visibly confused Mkhonta.

He said he makes hardly enough a month to put food on the table. Two thirds of the Swazi population lives below the poverty line of less than a dollar a day. Close to 300,000 people survive on food aid.

Sibandze’s argument that he’s seeking to protect living forest from destruction down does not hold up, at least not for Mphumuzi Magwagwa another firewood vendor at Ngogola. Magwagwa said they use indigenous knowledge to ensure that they conserve the environment.

“We know the trees that belong to the King (protected indigenous plants) which we don’t touch. Only dry trees that prevent grass from growing are cut and sold as firewood,” said Magwagwa.

He said it is a pity that while government is using the law to drive them out of business, it is not providing any alternatives so that they could continue earning a living.

“I’m a father of three, a widower, unemployed and I’ve never been to school,” said Magwagwa. “I can tell you now, if I’m stopped from selling this firewood, the only choice I’d have is to steal.”

Magwagwa’s assessment of his chances of finding another job ring true against Swaziland’s unemployment rate of 28 percent, the majority of whom are in rural areas.

Thuli Makama, the director for Yonge Nawe Environmental Group, argues that what government has to appreciate is that the fundamental principle of environmental management is to sustain human beings.

“Poverty levels are very high and people are exploiting one environmental resource or another just to earn a living,” said Makama.

Makama who knows the firewood vendors well says they are not just irresponsible people but a group with a code of conduct which they adhere to.

“The problem with our laws, like in most African countries, is that they’re always targeting the small men,” said Makama. “We can’t be frying sardines when we have sharks.”

Makama is basing her argument on the fact that big industries in the country such as SAPPI Usuthu – due to close down at the end of the month – have not been taken to task over pollution. The paper milling industry has been heavily criticised by environmentalists for releasing toxic effluent into Usushwana River which runs across Matsapha Industrial Site, leaving downstream communities with no water to drink.

“For years we’ve been trying to get government to give these issues affecting poor communities priority but nothing has been done,” said Makama. “It’s interesting to see the very same government being aggressive towards enforcing the law towards poor people.”

Across the road from the private farm owned by Tibiyo Taka Ngwane, a royal company held in trust of the Swazi nation, where the vendors gather their firewood, a Cape Town-based company is making charcoal but government is not bothering the owner.

Tibiyo Taka Ngwane gave the vendors permission to gather firewood from the farm while a permit was granted to the South African company to cut trees and make charcoal which they supply to the Kingdom and in South Africa.

Makama, who will be part of the civil society presence in Copenhagen, said the role of non-governmental organisations in the conference is to try to present the views and protect the rights of people like Mkhonta and Magagwa as a plan to arrest climate change is decided upon.