REYKJAVIK, Dec 12 2009 (IPS) - When Innovation Centre Iceland (ICI) managers began courses in farming renewable energy in October they were unprepared for the enthusiastic response from citizens. 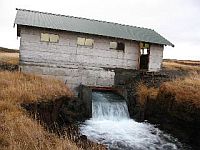 “The fact that the turnout far exceeded our expectations and we had to add three more locations for the course suggests that interest in sustainability and renewable energy is bottom-up in Iceland, not just top-down,” says Rosa Signy Gisladottir, marketing manager for ICI.

So far, three courses have been held: one in the northeast, one in the south and another up in the far northwest. Six more courses are being planned for the new year.

The course title “Do you want to be an energy farmer and produce your own energy?” targets individuals, companies, landowners and farmers. However, a considerable number of students aged 16-20 have also been attending the workshops in which various possibilities for harnessing energy are examined.

In Arborg, a municipality in South Iceland about 60 km from Reykjavik, which has a population of almost 8,000, there were 111participants. In Husavik in the northeast (pop. 2,300) 80 people attended the course as also in Isafjordur (pop. 2,700).

Gisladottir says that the basic structure of the courses is similar but differences arise because local engineers are involved.

“We at ICI want to let the Icelandic public know how to use the energy that is all around us, and to encourage as many people as possible to do so,’’ explains the director of ICI, Thorsteinn Ingi Sigfusson.

‘’We have top-class institutes working with us, such as ISOR (Iceland Geothermal, a consulting and research institute providing specialist services to the power industry) and the National Energy Institute, together with engineering companies. After the course, participants will know what is possible and what is doable,” Sigfusson told IPS.

The ICI course generally begins with an introduction on renewable energy in Iceland by Sigfusson. This is followed by a lecture on future sources of energy.

The practical part depends on location and lectures may focus on harnessing rivers and streams, making biofuel from dung heaps, geothermal heat and heat pumps.

Wind power, solar power and tidal power are rarely used in Iceland but even these form part of the course.

Bjarni M. Jonsson, who gave the lecture at Isafjordur, has been investigating the possibility of building a large-scale tidal plant in Iceland. Tidal power is not unheard of in Iceland and as far back as 1901 someone built a grain mill powered by the sea.

“For individuals, the technology is not very feasible at present,” says Jonsson, “though it may be a possibility in a few years’ time.”

The last part of the course is devoted to visiting energy farmers. At Arborg, one of these visits was to a farm run by Jon Tryggvi Gudmundsson. “I have started to produce methane gas from cow manure and am beginning to work on cleaning equipment and delivery systems for cars,” he explained to the course participants.

Gudmundsson benefited from a grant to carry out his project.

In May, the course participants will reassemble to receive more information about the practicalities of designing their own energy systems. Sigfusson says participants already have access to local engineering companies to advise them on technical matters whenever necessary.

In addition, Sigfusson and some of his colleagues also visit participants who are actively pursuing an energy project.

Because the first course was conducted only less than two months ago no one has yet been able to produce anything tangible. However, a number of participants are developing ideas that hold promise.

One of them, Hrafn Jonsson from Reykjanesbaer, 45 km west of Reykjavik, was already working on a small hydro project when he decided to take the course and develop the idea further. “The plan is to harness energy for our own use from a stream on our land. It will be enough for one summerhouse, nothing more,” he says.

Jonsson has been consulting officials from some of the concerned bodies and he says they have been encouraging and enthusiastic. He aims to develop the idea more in January.

Sigfusson says he and the organisers of the courses were surprised by how much several of the participants already knew – they had obviously been reading up on the subject.

“One man, Sigurdur Jonsson, stood up at the Arborg course and said he already had a small hydro plant behind his house that produces 650 kW/hr of energy, equivalent to one thousandth of the energy produced by Karahnjukar,” Sigfusson said .

Karahnjukar is the huge hydroelectric plant in East Iceland that was the subject of many protests while under construction.

Jonsson is the chair of the Icelandic Association of Energy Farmers and uses energy harnessed from the river Sanda.

“There was originally no electricity in the area, so the first power plant was built on the river in 1928. The electricity was originally used for the school. After that, plants were built in 1930 (by my grandfather), 1945, 2003 and 2009; we now sell the energy to the grid,” Jonsson told IPS.

Jonsson says that the plants are environment-friendly. “We have a small reservoir associated with the system. If anything, the birdlife in the area has increased since the last plants were built,” he added.

(This story is part of a series of features on sustainable development by Inter Press Service and the International Federation of Environmental Journalists.)