ANTANANARIVO, Dec 23 2009 (IPS) - The illegal logging of precious wood rose sharply during the political crisis that gripped Madagascar during 2009. Forest communities, who could be part of the preservation of these resources, have been swept up in the rush for rosewood. 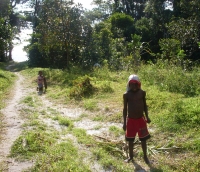 Children searching for firewood in the forest near Manompana, on the east coast of Madagascar. Credit: Lova Rabary-Rakotondravony/IPS

Rosewood, or Dalbergia baroni, is a very valuable hardwood, in great demand worldwide. Along with related species from Latin America and Asia, it has been over-exploited, and is a protected species in Madgascar.

Sipping a beer in a bar in the rural district of Manompana, is a strapping 30-year-old who today is going by the name “Christian”. It is 200 kilometres from the port city of Toamasina, through which much of Madagascar’s exports of wood pass. When one of his associates introduces a potential client for precious wood, he welcomes her with a broad smile.

“I can get you any quantity of wood you want,” he tells the woman. “I’ll discuss it with my loggers.”

“I pay locals to cut down trees,” he says.

“People shut their eyes to certain illegalities, especially when the wood leaves the country with proper papers, provided by the local authorities in exchange for a few large bills,” he says.

“The local population has only the forest to rely on, and in exchange for the wood that they find for me, I give them the means to survive and provide for their families’ needs.”

“If illegal logging goes on every year, in 2009 it saw exceptional growth, which has been catastrophic for the forests,” says Rakotondrainibe.

“Because of poverty – aggravated by the political crisis – and tempted by the easy money offered for illegal logging, communities could do little other than go with the flow and participate in the pillage of the forests to extract rosewood.”

He says the political crisis of 2009, which saw Marc Ravalomanana deposed as president by a populist movement headed by Andriy Ravoelina early in the year, reversed progress made since the putting in place of a national environemntal policy in the 1990s.

The situation is especially bad in the national parks of Masoala, Marojejy and Makira, in the northeast of the country, particularly known for rosewood.

To counter this, environmental NGOs are trying to involve forest communities in conservation.

“The transfer of management (of forests) is aimed at getting the local population to take charge against the illegal exploitation of the forest, as well as to sensitise them to the effects of their daily activities on the environment,” says Etienne Andriamampandry.

He is head of programmes at the Association Intercoopération de Madagascar, a non-profit organisation working on collective solutions to poverty alleviation. AIM’s efforts cover issues of local government, access to basic services, local economies and food security – forest management cuts across many of these themes.

Charline Toto, a member of a like-minded association in Manompana called “Ensemble pour la gestion de la forêt” (Together for the Management of the Forest) has learned the lessons well. Recognising the importance of forest resources in the daily lives of locals, she also appreciates how trees must be protected.

“Only wood found in the exploitable zones can be cut down and used for our daily needs, such as for the construction of houses and canoes, or to cook food,” she explains.

“But in the conservation zones, the forest must be protected because it ensures the balance of the environment and gives shelter to animal and plant species that are only found in Madagascar.”

But for every Charline Toto there are too many others willing to work for the young men with big wallets like Christian.

Raktondrainibe says the problem is compounded by the frequent corruption of local officials who authorise the shipment of timber.

“The continued uncertainty in the running of the country has led people believe there’s no longer any law and they can do what was forbidden,” adds Rakotondrainibe. “The publication of a an interministerial order allowing the exceptional export of precious woods has only made the situation worse.”

For Ndranto Razakamanarina, president of the Madagascar’s association of foresters, this order, issued in January by the government of former president Ravalomanana, is “completely illegal and completely contrary to the charter on the environment and the legislation on forests which forbids the export of precious wood.”

“It was meant to permit the release of (existing) stocks of rosewood which had been blocked from export for many years, but illegal logging syndicates have taken advantage by cutting down new timber,” he told IPS in an interview. “Worse, the validity of the order, which was to have expired at the end of March, was extended until the end of November by the transitional authorities.”

According to a report published by the Missouri Botanical Garden, a U.S-based research institution, more than 1,200 containers of rosewood left via the ports of Vohémar and Toamasina in the east of the island between January and October 2009. The report says these containers would hold about 120,000 logs – equivalent to the cutting down of some 60,000 rosewood trees.

“But, as the illegal loggers don’t follow regulation techniques, the extraction of each rosewood means the cutting down of half a dozen trees of other species in order to make rafts (to float them down rivers out of the deep forest),” explains Razakamanarina.

The depradations in protected forests in the northeast of the island has created an international outrcy, but it has also awakened the national conscience in Madagascar.

(*This article is part of a series on sustainable development produce by IPS – Inter Press Service – and IFEJ, the international Federation of Environmental Journalists.)