BLANTYRE, Dec 14 2009 (IPS) - An experience which Belita Simpokolwe went through in December last year remains deeply etched in her memory. “Sometimes I fail to concentrate in class when these things come back to my mind,” laments 13-year-old Simpokolwe, a grade six pupil at Kawale Primary School, in the northern Malawi district of Chitipa. 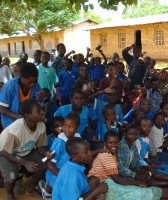 Belita Simpokolwe (in striped T-shirt) is only 13 but her stepfather married her off to a 77-year-old man. Credit: Lameck Masina/IPS

She says what pains her most is that she was victimised by the very people she believed would protect her from any danger that would ruin her future.

But her teacher says it is encouraging that Simpolokwe still performs well in class, and is likely to fulfil her dream of becoming a nurse.

The fourth of five children, Simpokolwe was one of the many victims of kupimbira – a cultural practice in which parents arrange marriages between young girls and older men to get money from a dowry – without the knowledge of the girl.

Sometimes parents offer their girls to men as payment for debt. Kupimbira is an ancient tradition practised by many tribes in northern Malawi.

Belita’s story is a tale of horror. “My stepfather ordered me to quit school and get married to a 77-year-old man because he said I was too old for standard four. I refused, and told him I wanted to continue with my education,” she says.

But her refusal did not change anything.

“Soon after that my stepfather began to send me to the market to collect money from a certain gentleman, ranging from five to 10 dollars, some of which I would use to buy food, then I would give the change my stepfather.”

She says she did not suspect anything untoward in getting the money from the man , as she thought he was a relation of her stepfather’s. But to her surprise, three weeks later the man came to her home with a garden hoe (traditionally, a garden hoe represents dowry in most marital practices in northern Malawi).

“I was very shocked when my stepfather asked me to receive it from the man (a girl receiving the hoe from a man means accepting marriage). Confused, I objected.

“My mother tried to reason with him that I was too young for marriage. But my stepfather charged at my mother, saying he could divorce her if she continued opposing his wish. He also said there was no objection, because we had already ‘eaten the money’ from the gentleman.”

She was forced to accept him, and after two weeks of marriage a group from the Chitipa Women’s Forum came to her rescue. They convinced her parents of the need to send her back to school. Simpokolwe, now living with her biological father, says she is happy to be back at school. The Women’s Forum is a grouping of women in her area who have volunteered to work with an Action Aid-funded project known as Social Empowerment on Rights for Vulnerable and Excluded Women.

The project seeks to end harmful traditional practices that violate the right of women to education.

Chairperson of Chitipa Women’s Forum Ruth Mbale says the group visits the homes of parents and victimised girls, and tell them of the need for the girls to go back to school.

“As women in this area we saw that since most women here did not go further in their education, it was good to discourage early marriages and urge young girls to proceed with education, taking advantage of government’s readmission policy, which allows girls to go back to school,” she says.

Mbale says the major challenge is resistance from parents and sometimes chiefs, who insist that they are too poor to meet the girl’s school needs.

“We don’t really provide assistance to those who go back to school. But under such circumstances we have set up a fund where members make monthly contributions. This enables us to pay school fees for the girls whose parents or guardians fail or refuse to assist,” she says.

Mbale says the girls undergo counselling by members of the forum through regular visits to their homes, where they are asked to forget the past and forge ahead with education.

Statistics from an impact-assessment report show that the project has so far taken back to school 40 girls aged between seven and 16, married through kupimbira in the district.

Mbale says the efforts have paid dividends, as some chiefs have realised the need to do away with the practice, which she says not only hinders girls from continuing with education, but also promotes HIV transmission.

Senior Chief Mwaulambia says he is trying to end the practice in his area, although there are still some families secretly continuing.

“Indeed we accept that kupimbira is a bad practice, especially when we are told to treat both girl and boy child alike. In my area I make sure it is being suppressed very vividly. If someone is forcing a child into kupimbira, we as chiefs have our own traditional ways of punishing our people. We may tell him to pay a chicken. If he objects, we have powers to evict him from the village,” he says.

Other traditional practices believed to violate the rights of women include ‘nhlazi’, giving into marriage a young relative of the wife, as a reward to her husband for being good to her family; ‘kulowa kufa’, sexual intercouse between a newly widowed woman and a designated man to ‘cleanse the village of death’, and ‘fisi’, hiring a man to engage in sex for the purpose of having children, especially when the husband is impotent.

The project is also being implemented in three other districts – Rumphi, Salima and Chiradzulu.

Meanwhile the Malawi government, in collaboration with civil society organisations, is implementing programmes to curtail harmful cultural practices that violate the rights of women.

For example, Forum for African Women Educationists in Malawi is championing the government’s school readmission policy, which seeks to return all teen mothers to school. Its national co-ordinator, Esther Msowoya, says the organisation in October alone rescued 10 girls from forced marriages in the northern district of Rumphi.

Nsowoya has hailed traditional leaders in the district for their help in the fight against the malpractice.