COPENHAGEN, Dec 17 2009 (IPS) - “Climate change is an opportunity to deal with all the issues of equity and justice that we have been struggling for all along,” said Kumi Naidoo, Executive Director of Greenpeace International in an interview with IPS on Thursday in Copenhagen. 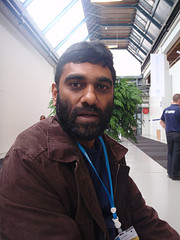 “And perhaps this is why there is such resistance from rich countries: they know that if they do the right thing in Copenhagen, they have to begin to share economic power and to have a more equitable trading system because all of those things have to follow, otherwise you cannot deal with climate change.”

Q: With less than two days before the end of negotiations in Copenhagen, world leaders seem reluctant to commit to a fair, ambitious and legally binding deal. Why? A: I think that developed countries are still in denial about their responsibility, even if they formally acknowledge it. The bottom line is we have global economic apartheid and essentially what we are seeing here is a sort of climate apartheid.

Q: They are also using their publics as an excuse not to act? A: Absolutely. And that was indicated on Saturday, 12 December, with all the mobilizations around the world.

The level of mobilization on Saturday shows there is momentum building up now and what was most important for me is that it was not only the usual suspects (Greenpeace, Friends of the Earth, WWF and other environmental organizations), but also churches, trade unions, and development organizations that traditionally did not focus on the environment.

Q: So the environment works as a catalyst for a global movement? A: Yes. Because people can see the interconnections. How can we have human rights if the planet is uninhabitable, how do we make progress with development if people end up in a situation where every progress they make gets lost. Look at Bangladesh, one of the poorest countries in the world – it had huge innovations on the part of the NGO community, many of those progresses have been reversed already by the effects of rising sea levels that are contaminating the water supply and creating water scarcity.

Take gender equality for example. If we look at Africa, where climate change is already having a devastating impact on agriculture, and then we ask who are the most vulnerable, it is small farmers and many of them are women.

One of the things that rich countries don’t pay attention to is that climate change has already lead to conflicts, and it will continue to increase conflicts because, sadly, the new wars won’t be about oil but about water.

If you take the genocide in Darfur, people always see it as an ethnic conflict, but they forget that Lake Chad which neighbours Darfur was one of the largest inland seas in the world and now it is virtually dry. Water scarcity, along with land scarcity, is one of the biggest drivers of the tragic conflict in Darfur.

The US is spending 30 billion dollars annually now just on the war in Afghanistan. If they are worried about the kinds of money we are asking for, then what is the point of spending money on war, military conflict and conflict resolution when in fact they could actually create real life opportunities for people who have been desperately poor and socially excluded. If we address that, it is a way to prevent conflict and war.

Q: Climate change is a major security issue… A: It is a fundamental security issue and, even if everyone knows it, the summit has sadly not given enough attention to that.

At the end of the day it is a matter of political will. If months ago they could mobilize trillions of euros to bail out the banks, why can’t they mobilize in the same way to save lives and turn this crisis into an opportunity.

Because there is a real opportunity here. In Africa, we have not even begun to scratch the surface with solar energy. If we make serious investments in solar, it is very likely that within the next 20 years Africa, particularly North Africa, could be net exporters of energy into Europe.

And I think all developed countries here, particularly the EU as a collective and within it Germany, and mainly the US have behaved pathetically, especially when we put it in a framework of justice. Developing countries have been least responsible for the situation we find ourselves in and they are the ones who are paying the first and the most brutal price.

They were told that they needed to put targets on the table and they have done so in the run up to Copenhagen. India and China for example passed or are in the process of passing domestic legislation, and they are moving in the right direction, but the rich countries have not reciprocated.

If you want to put it bluntly, if we don’t deliver a fair, ambitious and binding treaty here, we are issuing a death warrant for small island states and the least developed countries.

Q: The way things look today, global leaders are just about to sign such a death warrant this week. A: We should remember that two years ago in Bali, at a similar time in the conference, people were even more pessimistic. It was on the last day that the moral pressure coming from the intervention of Papua New Guinea forced the US to compromise in the early hours of the morning.

Q: What do you think of the exclusion of NGOs from the negotiation center in the last three days of the conference? A: I think the actions against the NGOs represent a betrayal of democracy, a betrayal of the informal compact that civil society has with the United Nations. It is desperately unjust and cruel, especially for small NGOs.

For them – who have spent this year saving money and preparing to come here – to be so brutally, unceremoniously and without any sense of dignity tossed out is a really big betrayal. When you look at some of the smallest grassroots groups present here, people who actually have the most authentic voices, being treated as they have been is very painful.

It’s been very painful for me to be here inside and I have actually thought about walking out myself. But if you are going to get any movement in the negotiations we have to use any limited capacity we have (Naidoo, who explains that he comes from a background of small NGOs, has moist eyes as he speaks about this topic).

We cannot blame the exclusion of NGOs on the Danish government. We are here in a UN space and the UN should know very well that this conference would not take place without the activities of civil society over decades, the heads of states would not be here if it wasn’t for us putting pressure on them in virtually every country around the world over the last year to come here because this issue is too important to be left to junior delegates.

Also, the legitimacy of any outcome here is undermined if it’s being done behind close doors, behind people and civil society.

The UN needs to realize that even if by some last minute trick a fair, ambitious and binding treaty is agreed on – and we can live without the legal exact wording right now, we need a clear set of ambitious targets, with the right kind of money, with the right kind of specific actions agreed and drafting the deal language in the next couple of months – the real work starts the day after to actually implement the deal.

And who is going to hold governments accountable and complement government capacity if not the NGOs?

Even if CoP15 will be a failure, what I would say to all NGOs, community groups, social movements, big NGOs, trade unions and everyone who came here is that they must take heart. It is not their failing. It is a failing of political leadership and what we have done has created a global momentum. We need to consolidate that, unite more, work more aggressively and continue the struggle.

(*This story appears in the IPS TerraViva online daily published for the U.N. Conference on Climate Change in Copenhagen.)