PARIS, Dec 20 2009 (IPS) - They huddle in the doorways of buildings with their few belongings, trying to keep warm. Or they sleep in covered shopping centres, accompanied by their pets – usually dogs. Some, reluctantly, make their way to government-run shelters. 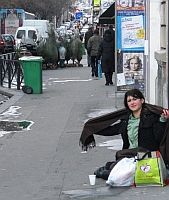 Living on the streets of Paris can be rough but many prefer that to state-run shelters. Credit: Djavan De Clercq/IPS

These are France’s homeless people (or SDFs as they’re called from the French sans domicile fixe), an estimated 200,000 of whom live on the streets throughout the country.

Their plight, often ignored by both officials and citizens going about their business, is now arousing concern as freezing weather sets in, blanketing the country in snow.

Already one homeless man in Bordeaux has died of the cold, raising to 326 the number of people who have died this year as a consequence of living on the street, according to Les Morts de la Rue (The Dead on the Street), a collective pressure group.

“It’s unacceptable for people to be living on the streets and for them to be dying there,” says Christophe Louis, president of the group, which comprises 40 associations working to help the homeless. “The government needs to provide long-term shelters. Temporary solutions aren’t working.”

Benoist Apparu, the environment ministry’s secretary of state for housing and urban affairs, recently ordered all town officials to accept all requests for shelter.

“The confirmation that there will be a period of severe cold weather in our country demands the concerted mobilisation of all actors – the state services, associations, local collectives and each French person,” Apparu’s office said in a statement.

The ministry said that more than 108,000 places are available in shelters all year long, and that an additional 8,000 have been made available for the winter, including 1,100 in Paris.

A ministerial advisor, Franck Thiébaux, told IPS that for the first time this year, the government has been coordinating the various efforts to help homeless people, in order to reach a greater number. Such efforts include having volunteers contact people living on the streets and informing them about public shelters, Thiébaux said in a telephone interview.

The government has also allocated 80 million euros (114 million US dollars) to “humanise” the shelters this year and in 2010, Thiébaux said.

President Nicolas Sarkozy declared in 2007 that within two years “no one would be obliged to sleep on the sidewalks and to die there from cold, because the right to housing was a human obligation.”

Despite such assurances, critics say much more needs to be done, and demonstrators gathered in Paris Saturday to demand further action.

“In reality, the government doesn’t want to occupy itself with the question of access to housing,” says Jean Baptiste Eyraud, spokesman for Droit au Logement (DAL – Right to Housing), an independent pressure group that organised the protests. “They need to take real measures to give lodgings to homeless people and they’re dragging their feet on that.”

The global economic crisis has meant that an increasing number of people have faced eviction in the past year, and DAL would like the government to act on France’s 2007 law which makes the right to housing an enforceable right, on the same level as the right to health and education.

This could entail putting the Requisition Act into force, in which empty properties would be made available to those without homes or those who are “badly housed”, including immigrants living in deplorable conditions.

According to DAL, France has more than 1.8 million empty apartments and other spaces that could be used to house the homeless. These include some 122,000 places in Paris alone, says the group, quoting the French statistical agency INSEE. In addition, there are “millions of square meters of offices and other locales that also remain unoccupied,” DAL says.

These potential “lodgings” remain empty because of “negligence, commercial calculation and the selfish refusal to rent”, says the group. Some landlords prefer not to rent their property because French law is usually in favour of the tenant. For instance, tenants cannot be evicted in the winter months even if they fail to pay their rent.

“The government must give housing to people, either by providing social apartments or renting private lodgings,” says Eyraud. “Public shelters are of bad quality. People should not be put in shelters.”

Patrice, a homeless man in his 50s who sits daily next to a supermarket near the Eiffel Tower with his cap in front of him, told IPS that he disliked the shelters and preferred to stay outdoors.

Each night he wraps up in a “good blanket” and sleeps under a roof of the Village Suisse, a landmark shopping centre of some 150 dealers selling expensive antique furniture and art objects.

“Nobody has to worry about me,” he said. “My name may be Patrice but I’m pas triste (not sad).”

He says he receives help from people in the neighborhood who have got to know him. They give him warm clothing and quilts to see him through the winter.

Patrice may consider himself lucky, but statistics show that his “good fortune” might not last. According to the group Les Morts de la Rue, the average age of those who die from living on the street is 47.6 years, in contrast to the national life expectancy of 80 years.