MIDEAST: Will You Marry Poor Me 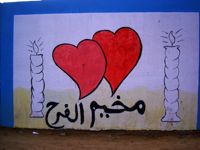 The Israeli siege imposed shortly after Hamas’s election in early 2006 has ruled out marriage for many. Palestinians traditionally marry young, between 18 and 25, but more and more now pass their mid-twenties single.

With unemployment levels above 45 percent, and the price of most goods doubled or more, living, and marrying, are becoming unaffordable.

Worsening living conditions under the siege are changing relationship patterns. While salaried work has traditionally been the man’s role, many women have been adding to the family’s income – or have sometimes been the sole provider – by selling hand-stitched embroidery.

Groups such as Oxfam, the Palestinian Agricultural Relief Committee, and other social organisations have provided some of the poorest women with small gardens, sheep, rabbits or chickens to tend for food and for income.

Palestinian women have long been respected for their strength in raising families under the severe conditions imposed by the occupation and by Israeli military activities. That people still marry and have families is inspiring.

Samir is close to giving up. “I work many jobs in order to bring enough money to marry,” he says. “But everything is so expensive in Gaza, and salaries have become lower. It can’t work like this.”

Sameh, 26, had decided he could not marry even before he was laid off work. “I just don’t want to get married in these circumstances. The money I earn in one month isn’t enough even for me alone. If I get married, I would want to be able to buy things for my children. I never want to tell my child ‘I can’t buy you a bicycle, let alone new shoes’.”

Sameh’s elder brothers, their wives and children, and his parents all share the same house, with separate apartments. The severity of the siege means that salaries that covered the needs of the extended family three years back are now stretched. Everyone looks out for additional work.

Mohammed is another in that long list now resigned to staying single. “I used to want to get married, but now I don’t consider it. Since I began working a few years ago, my salary has been low, just 600 dollars. At least 100 dollars goes towards phone costs. A few months ago, my pay was cut by 100 dollars. And now I am out of work.”

It is difficult to manage for himself, never mind a partner. “Years ago, if I wanted a pair of jeans, they were 60 shekels,” he says. “Now, it’s double.

“My parents used to pressure me to get married,” says Mohammed. “But now, because we aren’t a rich family, and they know how expensive weddings and living are, they’ve stopped nagging me. But eventually, I do want to get married, to live with a family. I think I’d like married life.”

The means to marry are disappearing; the pressure is not. Dima’s father died a year ago, unable to leave Gaza for treatment. Now 19, Dima will soon marry.

“There’s so much pressure on us, her extended family,” says Sameh, Dima’s uncle. “Because her father is dead, we all need to help with the wedding costs and also take on the role of her father.”

Dima is fortunate to have the opportunity to get married. Many unwed women feel even more pressure than men, particularly those above 25.

Some women have turned to matchmakers. Many do so without the knowledge of their family. Yet, other women are defying the tradition of marrying young, preferring instead to finish their education and begin their careers.

“I want to work for some years, establish myself, before I think of getting married,” says Noor, a woman in her mid-twenties. “I thought about it last year, but knew I was too young, and wanted to lead my own life first.”

Noor isn’t alone in expressing these sentiments. Leila, in her early twenties, agrees. “Why would I marry now? The situation in Gaza is too difficult,” she says, echoing also the views of her male bachelor peers.

For many who do wish to wed, the foremost reason that marriage is unthinkable is the sheer cost of the wedding. By conservative estimates, average weddings cost 10,000 to 15,000 dollars. This pays for hiring a hall, the parade to the hall, jewellery, clothes for the bride, and housing and furniture for the new couple.

Expenses like jewellery and the parade may seem frivolous, but these are long-held traditions. “Even if I wanted to cut out the wedding parade, I couldn’t,” says Sameh. “It is like an announcement to the neighbours and family that we are married now.” In a region where dating before marriage is not common, heralding the legality of a relationship is important.

“The cheapest wedding hall and party is around 3,000 dollars,” says Samir. “And we can’t hold a joint wedding with a friend; there are too many guests in each party. And besides, women need privacy so they can celebrate unveiled. The husband of one bride cannot be present at the party of another bride.”

Rafiq, 51, says he has finally saved almost enough to marry, after working the last eight years as watchman at an apartment building. “I work six days a week, from early morning till late at night. I still need to save another 3,000 dollars before I can have my wedding.”

Even for those already married, life in Gaza isn’t easy. Saber Zaneen, from Beit Hanoun, is married with two children. He remembers times when life was better.

“Families used to go their farmland to tend trees and enjoy nature. But this has nearly completely stopped, because Israeli soldiers along the border shoot at us, and because they’ve bulldozed and bombed all the trees and crops that once grew here. Now my wife and I just stay home with our kids. Watch television, visit friends and family. There’s nothing else to do.”

Mahfouz Kabariti, 51, is married with six children. He doesn’t feel the pinch of the Israeli siege nearly so much as the majority of Gaza’s Palestinians. But he still notices the difference.

“Before, we were under a different sort of siege: the occupation. But even with the Israeli soldiers and settlers here, it was still better than now, because we could move more freely than now. We could visit Jersualem, Haifa, Jaffa, Egypt.

“Now, it’s like we are just parts of a machine. It’s a daily routine, we don’t expect yesterday to be different from tomorrow. It is hard for people, especially children, to have any hope. We go to school or work, eat, sleep, watch television, read…That’s it, this is our life.”

*Some names have been changed to respect the privacy of interviewees.