KARACHI, Jan 31 2010 (IPS) - No sooner does a visitor step into the facility than a surreal scene unfolds: The sound of laughter, the sight of ready smiles and vigorous, pumping handshakes mix with the acrid odor of an unwashed human body and the unbearable stench of neglect that in turn combines with the heavy smell of medicine. 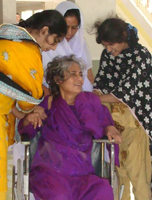 A group of women gathers around the visitor, their eyes lighting up and faces breaking into a smile as they extend their hands to offer the latter a firm handshake, only to be shooed away by Waseem Fatema, a stocky nurse in her late 40s.

This is the Edhi Centre for the Mentally Ill Women in North Karachi – home to women suffering from various forms of mental or emotional disorder, some of which warrant long-term treatment, others do not, requiring at best compassion and understanding for otherwise fleeting states of mental or emotional impairment, brought about in part by these women’s inability to cope with what society expects of them.

Of the more than one thousand female wards confined at the centre, some are as young as five years old and others as old as 70, or even older. Children, who are either physically or mentally challenged, stay in an adjacent facility also run by Edhi. Some of them were brought to the centre by parents who invariably said they could no longer afford to look after them.

Edhi – which gets generous donations, including the ‘zakat’ or a portion of one’s possessions, from various sectors of Pakistani society – also runs a separate facility for men, located outside the city limits. It offers its facilities and services free of charge.

Built over 10 acres in 1986, the centre initially had 50 to 60 women with mental problems in its care. Today, the number of its wards has swelled to over 1,600. In 2009 alone, around 380 women were admitted to this mental institution. Of these, 212 were discharged, 80 of them above 60 years of age who died without ever having seen their families.

“When I joined five years ago, there were only 450 patients,” said Dr Naseem Attique, 55, the centre’s general physician. Only one psychiatrist comes once a week to the centre to check on the wards’ conditions.

According to Dr Murad Moosa Khan, head of the psychiatry department at the Aga Khan University Hospital in Karachi, the psychiatrist to patient ratio in Pakistan is an abysmal one to half a million to a million people.

“A vast majority (of the wards) are brought here by none other than their children,” said Fatema the nurse, who has been with the centre for over 10 years. “I see relief in their [sons and daughters’] eyes when they pass on their burden to us,” she said ruefully.

Fatema argued: “If they are given the same care that we provide here…, most will lead a fairly normal life. Unfortunately, their children do not have that much patience or the time.”

“Care is seen as a feminine activity in traditional societies,” said Haris Gazdar, a Karachi-based economist. “As economies develop and more people are sucked into the labour market, women’s time becomes limited too,” he said. The result is that there is no one to take care of the elderly and the mentally ill. This is increasingly happening in today’s society, Gazar added.

Anwar Kazmi, secretary to Abdul Sattar Edhi, a well-known philanthropist in Pakistan and founder of Edhi Foundation, which runs the mental facility, said most patients at the centre come from the lower-middle class. “The main reason why they are here and not with their loved ones is poverty,” he said.

For large families in congested living conditions, usually consisting of one- or two-room houses, “taking care of a mentally ill person over a long period can take a toll on the entire family, especially on the sole bread winner,” he said.

But Dr Khan dismisses poverty as the main reason why women are being brought to a mental institution such as Edhi. “Poverty only comes into play when the decision to discard them has been made,” she said.

“Do you think I’d be here if my parents were alive today?” asked Farida Noorani, 39, who has spent 10 years as a ward at Edhi. “It’s my sister-in-law who sent me here,” adding that her two brothers come and visit her every month.

“Her brothers are quite well-off,” said Fatema in a separate interview with IPS. “If they wanted to, they could very well have kept her.”

“A vast majority suffer from various degrees of psychiatric problems and are on medication. When they get well, some are taken back by their relatives. But in most cases, medication is discontinued despite our strict instructions to the contrary,” said Attique.

Dr Khan said the status accorded to women in “our staunchly patriarchal society” has brought a number of women to mental institutions like Edhi even when their mental state does not require confinement in such a facility.

“Women are treated as second-class citizens and lower beings. Hence when they develop any kind of mental illness, they are discarded, he said.

This is particularly true for women who do not fit the “ideal image” imposed on them by society, including those who “rebel against oppressive customs and traditions” or who are seen as being “tarnished” in some way, said Bedar.

“These can be women of all ages, who deviate from what society expects … refusing to marry according to family wishes, remaining single, seeking a divorce, marrying by choice, standing up to domestic violence, not having children, etc.,” she explained.

Sadia Yasmeen, 39, has been at Edhi there for 12 years. “I’m here because of property feud (that arose) after my father died. My sisters, six of them and one brother, don’t want me to get married so they brought me here. But they have never once visited me. I don’t even know if my mother is alive,” she said. She teaches Quran to the younger wards at the centre.

Bedar said women in varying states of emotional or mental turmoil are not found at Edhi alone. “These women are found at psychiatric hospitals and wards where the women have either been abandoned my family members or sent there to be ‘cured’,” she said. “They are drugged or frightened into submission to the demands of family members.”

“Even in my clinical practice it is not uncommon for family members to bring young girls (aged 16 to late 20s) to me because they refuse to heed the family demands” such as in cases of forced or arranged marriages.

“The women who end up in facilities such as Edhi belong to a category where such ‘deviation’ cannot be tolerated,” said Bedar.

“At times these young women really do exhibit psychiatric symptoms (e.g., suicidal tendencies), requiring (professional help), but this is often a result of their specific situations and the demands placed on them. In other cases, the mental illness is very real but is a result of the circumstances in which these women live,” she explained further.

Others appear normal. Take for example, Rashida Anees, 55, who has been at the Edhi centre for 11 years now. “Once my brother comes back from South Africa, he will come and take us home,” she said matter-of-factly. The former teacher in one of Karachi’s most prestigious schools, Mama Parsi, has never once received a phone call from her brother.

Pakistan’s Constitution allows a woman aged 18 and above to marry of her own free will, but in practice women are often severely punished or even put to death for straying from tradition. Women who bring dishonour to their families can easily become the target of ‘honour killings’, a practice banned in 2004 and made punishable by the death penalty. Yet the culprits are rarely punished.

It is also not uncommon for a young girl to be married off before the age of 18 because the prospective husband promises to pay off her father’s debts. In such a situation, women can easily succumb to depression, anxiety, and psychosomatic disorders, which Bedar said are common among Pakistani women.

“When girls in our society are socialised to believe that they are inferior, that their worth is less than that of boys, that their potentials … are only valuable if they are in the ‘feminine domain’ – such as the domestic sphere – this has the potential to affect their mental and emotional health and well-being, she said.

“It is no wonder then that depressive symptoms, anxiety, and issues of relationship, self-image, self-confidence, suicidal attempts are more common in women and girls in our society.”

Across Pakistan, Khan said approximately 34 percent of the population suffer from depression and anxiety alone and about 1 to 2 percent from psychosis, brought about by a host of factors.

For women, those factors include cultural mores that force them into a situation that, in society’s views, require their confinement in a mental institution such as Edhi.