WORLD SOCIAL FORUM: Crisis Could Usher In Another World

PORTO ALEGRE, Brazil, Jan 27 2010 (IPS) - In the societies of the future, young people may not start to work until the age of 25, there will be lifelong education for everyone, with university graduation as the starting point rather than the end goal, while working hours could be reduced to 12 hours a week for all. 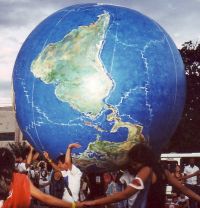 Construction of this “higher society” envisaged by Marcio Pochmann, head of the Brazilian state Institute for Applied Economic Research (IPEA), will probably be financed from public funds collected from taxes on global financial profits, which today amount to 10 times the value of the real economy.

Postponing entry into the labour market so that young people can further their studies is already common practice among well-off families, and should now be generalised in order to reduce the labour supply and unemployment, said the labour economics expert.

This reorganisation of society will be the result of struggles and pressures that will require new forms of associations, beyond trade unions, added Pochmann, speaking at the seminar “Progress: What For and For Whom?” at the Greater Porto Alegre World Social Forum, being held Jan. 25-29 at several venues in the metropolitan area of this city, the capital of the southern Brazilian state of Rio Grande do Sul.

A new kind of civilisation is necessary, because the current pattern of consumption is unsustainable, he said, pointing to housing trends as an example. Housing units today are larger and house only one-third of the number of people who lived in them a century ago.

“In Barcelona, one-third of housing units are occupied by a single person,” he pointed out.

But the measures taken to avoid deepening the global financial crisis, such as pouring billions of dollars into bailing out large corporations and banks, were adopted precisely to support that level of consumption, Pochmann said.

The crisis “is systemic, but not as intense as was predicted,” although its effects will be long-lasting, much like the prolonged Japanese recession that began in the 1990s and lasted more than a decade, he said.

Ladislau Dowbor, an economics professor at the Catholic University of São Paulo, said that problems as diverse as climate change, the financial crisis and water shortages are converging into a global crisis of civilisation, which generates opportunities while demanding changes.

Dowbor summarised the 12 proposals in the study “Crises and Opportunities in Changing Times” which he co-authored with Franco-Polish eco-socio-economist Ignacy Sachs and the head of the United Nations Institute for Training and Research (UNITAR), Carlos Lopes, who is from Guinea Bissau.

The first recommendations of these experts, who seek “viable” alternatives to the irrationality of the present system, is to rescue the public dimension of the state, undermined by corporate funding of elections which make politicians poor regulators of these firms.

Another is to redesign national accounting systems, particularly the way GDP is calculated. At present, deforestation and high levels of child mortality contribute to GDP growth, because timber, medicines and medical services are marketable products, and therefore counted, while environmental and human costs are not.

Assuring the right to life; guaranteeing a basic income and the right of everyone to a decent job; promoting lifestyle changes; taking public control of finances by taxing speculative transactions; reviewing the logic of taxation and budgets; and enabling access to sustainable technologies, are also urged.

Dowbor, who also wrote the book “Economic Democracy: Strolling through theories,” belongs to an international network of economists doing theoretical work on “post-development,” a critique of Western-dominated development practices.

The social economy, which includes cooperatives, non-governmental organisations, not-for-profits, community and voluntary activities, and its subsector in Brazil called the “solidarity economy” (such as self-help, solidarity lending and bartering systems), are growing rapidly and may soon be more important than the conventional economy, Dowbor told IPS.

Health, education and various services that are “intangible, or non-material” already represent a large portion of the economy in many countries, he said.

This is why he believes that abandoning a consumerist lifestyle is possible. For example, in France buildings have been erected that consume one-tenth of the energy of conventional constructions, he said.

In the U.S. state of Utah, the work-week was cut to four days, which could become a growing trend. It need not lead to a shrinking of the economy if activities in other areas, like culture and leisure, are increased, he said.

For his part, Prabir Purkayastha from India advocated “free knowledge” and the abolition of intellectual property, because knowledge “belongs to all and is infinite,” since it is not diminished by use. Reorganising the economy requires new and appropriate technology, especially for small-scale producers, who must be encouraged – an area in which China and India have a great deal of experience, he said.

Speaking at the debate on “Progress: What For and For Whom?” the economist and peace activist emphasised the “over-consumption and over-development” seen in some countries, and said the inhuman inequality that persists in the world is also unsustainable.

In India, half of all households are not connected to the electricity supply, and extreme poverty affects a similar proportion of the population, he said.

The challenge for his country, then, is to fight poverty without promoting the same style of consumption followed in industrialised countries.

In Bolivia, the government of President Evo Morales was able to harness the upsurge in activism by social movements to achieve impressive advances, like getting the indigenous Aymara cultural concept of “allin kausaw” -“the good living” or “to live in harmony” – into the constitution, and empowering citizens with the rights to be consulted, be informed, and participate in decisions affecting the environment.

But Morales’ economic policies are based on the Initiative for the Integration of Regional Infrastructure in South America (IIRSA), cast in the old “developmentalist” mould. While IIRSA increases access to Asian markets, the policies are completely inconsistent with the new constitution, claimed Gustavo Soto, of Bolivia’s Centre for Applied Studies in Economic, Social and Cultural Rights.