HARARE, Jan 15 2010 (IPS) - Eleven-year-old Memory’s grandmother wanted her to drop out of school because she is not going to live long enough to complete her studies. And the ridicule and stigma Memory endures at school because of her HIV status does not make her education seem worthwhile. Especially since this ridicule comes from her teacher. 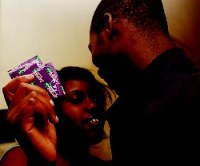 In some Zimbabwean schools students are not allowed to speak openly about HIV/AIDS or condoms. Credit: IRIN

In a country where aids agencies estimate 120,000 children are HIV-positive, school teachers are finding themselves increasingly in the frontline of the epidemic.

The National AIDS Council recently carried out a study that found “teachers had not received enough HIV/ART education to carry out their supportive role in paediatric and adolescent care and support”.

And from Memory’s situation it is clear that teachers are ill-equipped to cope with the number of HIV-positive children in schools.

Mbuya Tapera, Memory’s grandmother, listens daily as her grandchild relates how she has been ill-treated by her teacher. “Her teacher believes she is wasting time by coming to school when it is obvious she will die before she completes her studies.” “I think she is better off at home than at school,” says Tapera.

But the situation in the country’s schools has not gone unnoticed.

The United Nations Educational, Scientific and Cultural Organisation (UNESCO) Harare Cluster office partnered with the ministry of higher and tertiary education to develop an HIV/AIDS manual for teachers.

The manual will be incorporated into the curriculum at teacher’s training colleges from Jan 11, the start of the new academic year.

“The role of the teacher in the fight against HIV/AIDS among other social development issues cannot be overly emphasised,” says higher and tertiary education permanent secretary, Dr Washington Mbizvo.

He says the ministry believes teachers have the ability to develop the intellectual and spiritual capacity of the child. “It is important to enhance teacher education as a means of attaining an HIV/AIDS-free society. We have to ensure that all teachers are grounded in their knowledge of HIV/AIDS,” says Mbizvo.

The director and resident representative of UNESCO, Soo Hyang Choi, says the development of the manual was influenced by a realisation that the involvement of teachers would boost the fight against HIV.

“Education can no longer be business as usual, teachers have to acquire adequate skills to be able to address these children in a sensitive and informed manner,” said Choi.

Tapera agrees. “These teachers have no understanding whatsoever about HIV. For them whoever has the virus has been sentenced to death. It seems they do not believe that one can live a normal life with it. And it seems they just do not care to listen to some of us,” added Tapera.

Memory tested positive in 2005, the year she started primary school. Tapera and other relatives got assistance from community support groups which helped Memory to accept her status and believe that she can still have a good quality of life

“When she went to school, we all believed school was the best place for her,” Tapera says. But things have changed. Now everyone at the school knows that Memo is positive, and that her mother died of an AIDS-related illness. “All this is because of her teacher who makes it appear like Memory committed a serious crime,” Tapera says.

Other students across the country have also experienced this stigma from their teachers.

Because of the lack of support at their school a group of HIV-positive youngsters in Gwanda, the provincial capital for Matabeleland South, grouped together and formed their own support group. Despite their knowledge about the virus they are not allowed to speak publically to other students at school about issues surrounding HIV.

“If (we) are seen or heard talking about HIV/AIDS or condoms, (we) will be in trouble with our teachers,” said Musa Dube*, a member of the group.

But with the introduction of the manual, Musa and others in the group hope their teachers will now support them in their effort to live positively.

But Portia Munyoro, a trainee teacher at the Morgan Teachers’ College in Harare believes teachers “are not that inhumane to ill-treat these (HIV-positive) children”.

“As teachers, we know that our task is to help these children get a brighter future, whether they are (HIV-) positive or not,” Munyoro says.

She says although she has attended a number of counselling workshops at schools and at ward level, she still finds it difficult when it comes to counselling children. “Counselling children is much more difficult than counselling adults because one has to simplify everything, and I hope this manual will equip us with ways of handling this challenge,” Munyoro says.

“At times you try to use force for the children to open up, and this is probably where this talk about harassment comes from.”

The manual was developed to address this, among other issues.

The manual has sessions on cultivating positive group dynamics, basic and technical information on HIV/AIDS, gender and sexuality.

Rita Mbatha, the founder and executive director of Women’s Comfort Corner, a non-governmental organisation that works with women at the grassroots in communities, said the manual will go a long way helping not only teachers and pupils, but also women who do most of the work as care givers.

“Educators play an important role in the fight against HIV/AIDS, particularly in terms of ensuring proper care among infected and affected children. Teachers are best positioned to handle issues of denial and stigma among and against school children,” says Mbatha.

She says the impact teachers can make on their students would cascade to the rest of the community.

“The school offers a good foundation for shaping how people behave in society, and all this centres around the teacher. I have no doubt this manual will provide the link that has always been missing between parents or guardians and teachers of children living with HIV,” adds Mbatha.