CENTRAL AMERICA: Women Eke Out a Living in Informal Economy

GUATEMALA CITY, Feb 16 2010 (IPS) - “I’ve been working in the streets since I was a girl. My parents didn’t send me to school, so it’s really hard for me to find a job,” says Carol Orozco, 31, who forms part of the veritable army of vendors hawking their wares on the streets of Central America. 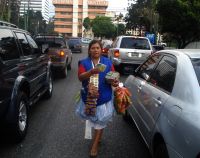 Weaving between the cars at a stoplight in downtown Guatemala City, trying to sell candy to drivers, Orozco told IPS that she had four children to support, “because their father doesn’t do anything for them.”

Street vendors like Orozco make up a large part of the informal economy in Central America, a sector where women far outnumber men

According to the third regional report on the labour market in Central America and the Dominican Republic produced by the International Labour Organisation (ILO) and the Central American Integration System (SICA), 64 percent of women in the labour force in the region work in the informal sector, compared to 50 percent of men in the workforce.

Orozco would love to have social security coverage, a regular wage and labour benefits, because the roughly 200 dollars she earns a month barely covers the costs of food, clothing, education and health care for her children.

“I work here, without a toilet or water, from seven in the morning to eight at night, in the sunshine, rain or cold,” says the street vendor, who approaches cars when the stoplight turns red, with her packets of candy strapped around her neck.

She says she got a formal sector job once, selling funeral insurance. “They offered me 900 ‘quetzals’ (107 dollars) every two weeks. But after I sold insurance to several customers, when I went to ask for my paycheck, they didn’t pay me,” she recalls, with disappointment still in her voice.

Now she works at an intersection in a busy office district in the capital, where she competes with 11 other street vendors.

Of the women in the workforce in Guatemala, 73 percent are in the informal economy, compared to 64 percent in El Salvador and 45 percent in Costa Rica, according to the ILO/SICA study, which defines the informal sector as including the self-employed, domestic workers and unregulated microenterprise.

Although the number of women in the labour force has been growing faster than the number of men since 2001, poverty, lack of education and discrimination complicate the employment outlook for women in Central America, says the study, which was released in October 2009.

“You can’t take your kids to work with you” in a formal sector job, 32-year-old Paulina Mazariegos tells IPS as she hawks fresh fruit from a basket while caring for her two-year-old son Erick near a bus stop in the capital.

She says she earns just 3.50 dollars a day, because she keeps only part of what she takes in; the rest goes to the owner of the small business that provides her with the merchandise.

Mazariegos realises that her labour situation is precarious in large part due to the fact that she never went to school, because “parents didn’t used to send their kids to school.”

She has eked out a living working as a domestic or selling food on the streets.

In Central America, over 38 percent of the workforce have not completed primary school and 73 percent have less than a complete secondary school education, says the ILO/SICA report. Of the 20 million people in the labour force in the region, 60 percent are unskilled, it adds.

This region of 43 million people is one of the most unequal areas in the world, with half of the population living in poverty, according to international bodies.

And against that backdrop of inequality, women face fewer employment opportunities than men, earn less than men in every area, especially manufacturing, and have higher unemployment rates than men.

Salvadoran Labour Minister Victoria Velásquez pointed out that two out of five people in the workforce are women, which means governments should adopt policies aimed at “greater inclusion” of women in order to keep them from being trapped in the lowest-paying, most precarious jobs.

The 20 million-strong labour force in Central America and the Dominican Republic – a Spanish-speaking Caribbean nation that is grouped in the subregion by the ILO – is made up of 62 percent men and 38 percent women, while 60 percent are in the informal sector of the economy.

The key to improving the situation lies in education. Nearly 70 percent of women with some level of higher education are employed, while under 35 percent of those with little or no schooling are economically active.

Otto Navarro, with the U.S.-based Global Fairness Initiative (GFI), told IPS that informal labour is growing in the region, as indicated by a 2009 study carried out by that not-for-profit institution in Guatemala and Nicaragua.

And as part of that phenomenon, women’s participation in street vending, craftsmaking and agricultural labour particularly stands out.

Labour discrimination is a repetitive theme in the countries of Central America. “I came to set up my clothing stall and the other vendors told me I couldn’t, so I had to switch products, and now I’m selling accessories,” Ada Ortiz, 33, commented to IPS.

To complement her low salary as a pulmonary therapist, Ortiz was forced to open a stall in a Guatemala City market, to support her two children.

Luis Felipe Linares, a former Guatemalan labour minister who is now with the Association for Social Research and Studies (ASIES), an independent research centre and think tank, told IPS that women have a strong presence in the informal market, despite persistent gender discrimination.

“Women report lower earnings for the same activities that men perform. Men also have greater access to capital to set up larger businesses, which enables them to earn higher incomes,” the expert said.

“Labour issues are worked out on the basis of negotiations. But in order for that dialogue to be beneficial for the majority of the population, the playing ground must be more level. And there must be a good arbitrator with influence and a capacity to set forth proposals,” he said.

Irma Montes, a leader of the Confederación de Unidad Sindical de Guatemala trade union federation, told IPS that the Central America Free Trade Agreement (CAFTA) with the United States and the global economic crisis have fuelled the incorporation of women in the labour force.

“Women have even been coming up with new ways to sell in the markets and on the streets. For example, we just saw the formal creation of a union of food vendors who use three-wheeled vehicles,” said the trade unionist.

But keeping a business going is no easy task. “Sometimes they (the authorities) don’t let them sell, and confiscate their merchandise because they have no permit or are selling in prohibited areas,” said Montes, describing the mistreatment often faced by street hawkers.

“These women take risks every day because they have to survive and raise their families, who they generally support on their own,” said the trade unionist.