CHAPANTONGO, Mexico, Feb 9 2010 (IPS) - It was Isabel Cortés, the family matriarch, who started the project. In 1990, she started looking for a way to market xoconostle, the sour variety of the nopal cactus fruit that is abundant in this arid part of central Mexico, in the Mezquital valley. 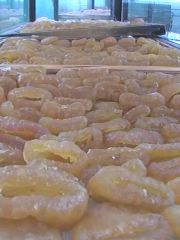 Each solar dryer can dehydrate eight kg of cactus fruit at a time. Credit: Courtesy of Xoxoc

Twenty years later, her initial efforts have given rise to a family business in which she and her four children are partners. The company uses alternative techniques to process the fruit and is supporting efforts to expand the planting of nopal, the prickly pear cactus native to Mexico, to help curb soil erosion in the valley.

One of the firm’s innovations is to use solar energy to produce dehydrated xoconostle, which in the Nahuatl indigenous language means “tuna agria” or sour cactus fruit. The fruit is placed in solar dryers mounted on the company’s roof.

“The xoconostle has fallen out of use, it’s not eaten much anymore,” says one of the partners, Gabriel Cortés, who studied Hispanic literature at the National Autonomous University of Mexico (UNAM).

“Production levels are small, so we are geared to the gourmet market. Solar drying maintains the nutritional properties as well as the flavour,” he tells IPS.

The company is just one example of the growing use of solar energy in industrial processes in Mexico.

Another case is found 4,400 km northwest of the Mexican capital, on the border between the states of Baja California and Baja California Sur, where the Compañia Exportadora de Sal (ESSA) operates.

ESSA, a joint venture between Mitsubishi Corporation of Japan (49 percent of shares) and the Mexican government (51 percent) founded in 1954, produces and exports sea salt.

The company, which operates one of the biggest evaporative salt works in the world, is located on 33,000 hectares of land in a sunbaked region.

ESSA produces seven million tons a year of salt, involving the evaporation of 190 million tons of water and the conservation of 5,000 petajoules (equivalent to 277 million kilowatt-hours) of energy.

To produce the salt, the salt content of the lagoon water is raised by moving the water from one concentration pond to another, using solar and wind energy to evaporate the water. After the evaporation process is completed, the water is moved to shallow crystallisation ponds where is it harvested, cleaned, and prepared for transportation.

The salt works “are a good example of the use of alternative energy and energy savings,” Pablo Mulás, an academic at UNAM’s Instituto de Investigaciones Eléctricas (Electrical Research Institute) and one of the most enthusiastic supporters of ESSA’s use of solar energy, tells IPS.

Mexico has great potential for solar energy production, because of the high insolation level – the amount of solar radiation received by a surface at a given time.

Most of the territory receives an average of 5 kWh/m2/day (kilowatt-hour per square metre per year) – compared to 2kWh/m2/day in northern climes like Norway and over 6kWh/m2/day in high insolation places like Egypt.

According to a report by global environmental watchdog Greenpeace, the use of solar energy to heat water, wind energy projects and the use of biomass to produce electricity could generate 500,000 jobs in Mexico.

The firm processes three tons of cactus fruit a month, part of which comes from its 10 hectares of crops and the rest of which is purchased from small farmers who have begun to plant nopal cactus in Mezquital valley.

Each solar dryer holds eight kg of raw material, which is put in the sun for up to three days.

“In Mexico, it hasn’t made a difference (among consumers) to know that the product was dried using solar energy. But in the United States and Germany, that is seen as much more of a plus,” said Gabriel Cortés, whose brother Antonio earned a degree in solar energy from Spain.

The company, which employs seven women in its plant, sells 11 different products – mainly jams, preserves, and sauces – in high-end stores around the country and exports to Canada and the United States as well.

The four partners are preparing a funding proposal to seek state financing to expand the project, which would include the acquisition of solar panels. In 2005 they received 50,000 dollars from the National Fund for Support of Solidarity Enterprises (FONAES), a government body, to build the plant. They have invested a total of 300,000 dollars.

The firm uses three of the nine kinds of xoconostle – fruit that is rich in fiber, vitamins and minerals – that grow in Mexico.

With advice from the independent Centro Promotor de Diseño México (Mexican Design Promotion Centre), they came up with the brand name Xoxoc and designed the packages.

In ESSA, meanwhile, solar evaporation is used to produce nearly all of the company’s salt.

The salt works was awarded the Mexican government’s National Export Prize in 1994 and 2002. The company exports to Canada, Japan, New Zealand, South Korea, Taiwan and the United States, where the salt is used in the chlor-alkali industry and for human consumption and winter road maintenance.

UNAM’s Mulás said there is still a long way to go in terms of the use of solar energy in Mexico. He noted, for example, that more attention is paid to the generation of electricity than to heating, an area of great potential.